“Legal protest movements are rising on a global scale in an unprecedented way. They are fueled by pro-imperialist and reactionary policies and such concrete conditions generated by these as rising mass unemployment, soaring prices of food, fuel and other basic commodities and increasingly violent reaction of states to unarmed protests.” – Professor Jose Maria Sison

MANILA – More than 400 members of people’s organizations from at least 40 countries gathered together to come up with common efforts in building a brighter future.

The Fourth International Assembly of the International League of Peoples’ Struggle (ILPS) formally opened today at the Ciudad Christia Resort in San Mateo, Rizal. With delegates representing more than 300 grassroots organizations from all continents, the assembly is the biggest since 2001. It will last until July 9.

The ILPS was founded in May 2001 at Zutphen, the Netherlands. With the theme, “Build a Bright Future! Mobilize the People to Resist Exploitation and Oppression Amidst the Protracted Global Depression, State Terrorism and Wars of Aggression!” the Fourth International Assembly coincides with the tenth year of the League. 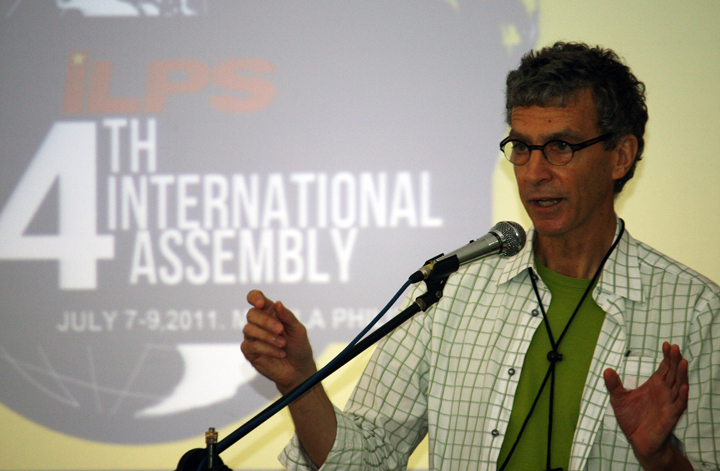 Malcolmn Guy, secretary general of the International League Of Peoples’ Struggle, addresses the delegates.(Photo by Raymund B. Villanueva / bulatlat.com)

In his keynote address, Prof. Jose Maria Sison, chairman of the ILPS International Coordinating Committee (ICC), said: “The League stands today as the foremost global formation of mass organizations comprehensively covering all major concerns and issues in the people’s struggle for national and social liberation and promptly issuing analyses, statements and calls to action for the benefit of the broad masses of the people.”

Sison said the current global crisis is rooted in the relentless drive of the transnational corporations to maximize profits by raising productivity while pushing down the wages of the working class, resulting to the crisis of overproduction.

“As a consequence, the monopoly bourgeoisie resorts to finance capitalism, the rapid expansion of money and credit, unregulated debt financing and the generation of derivatives, to boost the rate of profit far above the real economy, overvalue assets and accelerate the accumulation and concentration of both real and fictitious capital,” Sison said.

“The bailout in trillions of dollars combined with the continuing tax cuts for corporations and the upper class and the rising military expenditures also in the trillions have resulted in huge public deficits and public debts while failing to stimulate production. The biggest and the worst of the financial bubbles have conspicuously appeared in the form of the public debt bubble. Now, this bubble is bursting in the imperialist countries and spreading like an epidemic to other countries. And the reaction of the imperialist and client states is to adopt austerity measures at the further expense of the working people and even the middle class,” Sison said.

“The burden of the worsening crisis is further being passed on to the broad masses of the people,” Sison said. He added that imperialist states stick to the dogma of neoliberal globalization, blaming wage inflation and government social spending for the crisis. 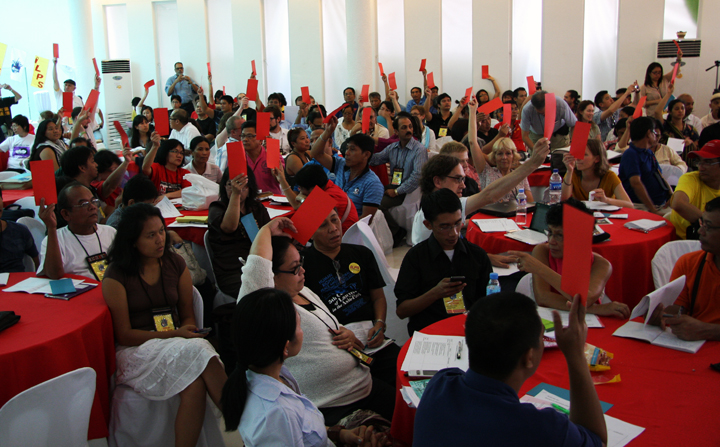 Delegates of the International League of Peoples Struggle 4th International Assembly gather for the opening of the Assembly.(Photo by Raymund B. Villanueva / bulatlat.com)

Sison said the imperialist powers continue to fail in solving the global economic and financial crisis and are increasingly in contradiction with each other over economic, financial, trade, political and security issues.

Sison noted that the US and other imperialist powers tend to be more aggressive as the global economic and financial crisis worsens, stepping up war production and engaging in aggressive actions. He added, however, that the US, being bogged down in Iraq and Afghanistan, has incurred heavy costs of war and therefore, faces difficulty in launching further wars of aggression.

Sison said that the escalating level of exploitation and oppression has pushed the people to resist, waging various forms of struggle.

“Legal protest movements are rising on a global scale in an unprecedented way. They are fueled by pro-imperialist and reactionary policies and such concrete conditions generated by these as rising mass unemployment, soaring prices of food, fuel and other basic commodities and increasingly violent reaction of states to unarmed protests,” he said.

Sison cited the mass uprisings against US-supported autocratic regimes in North Africa and the Middle East, particularly those that have resulted in the overthrow of regimes in Tunisia and Egypt. He added, however, that the ruling system of the same reactionary classes persists in these countries.

He added that the workers, the youth, the women, the migrant workers and the rest of the people have launched general strikes and massive protest actions in France, Italy, Spain, Greece, Ireland and Portugal against the growing loss of employment, the plummeting income, the erosion of social benefits and social services.

Sison said the most outstanding armed struggles are those being waged by the people of Iraq and Afghanistan against the US-led invasion and occupation of their countries, the Palestinian people against US-supported Zionist Israel, the people of Columbia, Peru, the Philippines, India, Turkey, North Kurdistan, Nigeria and other countries for national liberation and democracy against US imperialism and the local reactionaries.

“As the crisis of global capitalism protracts and worsens, more armed revolutionary movements are bound to arise and advance in various countries and continents. By their own example of counterrevolutionary violence, the imperialists and local reactionaries are pushing the people to rise up in arms,” he said.

Malcolm Guy, ILPS secretary general and a film maker from Canada, underscored the importance of strengthening the ILPS by expanding its membership.

Guy said there is a need to reach out to more organizations in different parts of the world and carry forward the anti-imperialist line.

“The people have a bright future because they wage revolutionary struggles and build their strength against those forces that oppress and exploit them, Sison said.