“We are like slaves! We are not being treated with respect and by ignoring our demands for a CNA the MMDA administration is stripping us of our dignity.” MMDA streetsweepers

MANDALUYONG – Next time you see a street sweeper from the Metropolitan Manila Development Authority (MMDA), spare an indignant thought on his or her behalf: they are among the Aquino government’s most exploited employees. 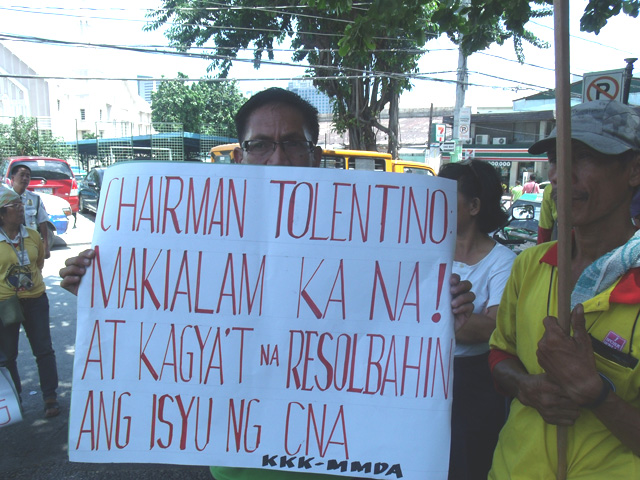 For the last 10 months, employees of the MMDA led by the Kagalingan ng mga Kawani sa Kalakhang Maynila (KKK-MMDA) have been in active negotiations with the MMDA administration for their collective negotiation agreement (CNA).

The CNA is the equivalent of the collective bargaining agreement (CBA) in the private sector, and is defined by the Civil Service Commission as “the negotiated contract between an accredited employees’ organization representing a negotiating unit and the employer/management concerning terms and conditions of employment and improvements that are not fixed by law.”

Leaders of the KKK, however, have exposed the MMDA administration’s “refusal to honor its word” and sign the CNA draft that both parties finalized last April.

KKK secretary-general Ma. Theresa Gonzalez said that despite the regular meetings and the previously agreed upon schedule for the CNA signing, the MMDA administration led by its chairman Francis Tolentino and assistant general manager Edenison Fainsan have ignored the April deadline.

“The members of KKK, most of us street sweepers and utility staff, have been sincere in our efforts to negotiate with the MMA bosses. What we want is for the MMDA to recognize our rights as employees and give us the economic benefits that we deserve after years of honest service to the MMDA. Fainsan in particular has been acting as a destabilizer, deliberately throwing a monkey wrench in the relations between the KKK and the MMDA administration by saying that the CNA should be reworked and rewritten,” Gonzalez said.

Gonzalez said Fainsan has been calling for the removal of the most important economic provisions in the CNA draft finalized between the KKK and the MMDA. According to Gonzalez, Fainsan is a “villain” who seeks to undermine the economic welfare of the majority of employees of the MMDA who are among the poorest of the poor.

“He wants to strike out the economic provisions in our CNA. The CNA would be essentially useless if these provisions are removed. We have been working hard to push for these provisions precisely because our members are in dire need of economic assistance. We are poor but hard-working people, but Fainsan would rather we continue suffering our starvation wages and terrible work conditions. He has no right to demand this; and we will fight tooth and nail against any and all of his attempts to mangle our CNA,” she said. 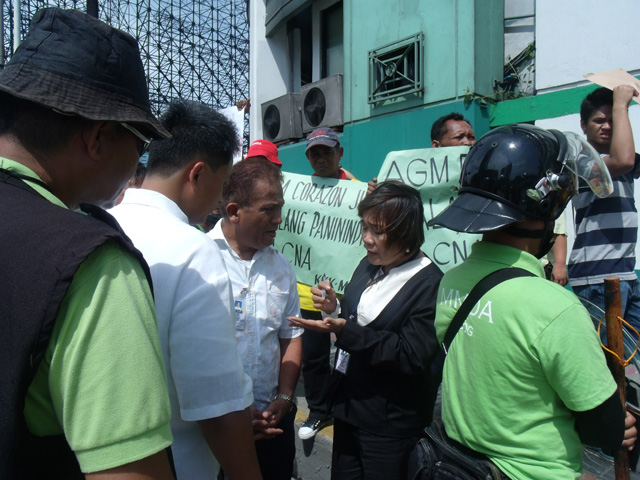 Last July 20, KKK-MMDA members declared “enough is enough” and held a protest in front of the MMDA main office along EDSA. They said they were sick and tired of the administration’s excuses and the delays in the signing of their collective negotiating agreement (CNA). (Photos by Ina Alleco R. Silverio / bulatlat.com)

Article VIII of the KKK’s CNA draft is on economic assistance benefits, and among the demands of the union are a quarterly rice allowance of P1,500 (US$35) to every employee pursuant to the directive issued by the previous Macapagal-Arroyo government in 2008 stating the same for all government employees.

The KKK is calling for an annual Christmas incentive allowance in the form of groceries worth P500 (US$11.62) . It’s also asking as addition to the MMDA’s Program on Awards and Incentive of Service Excellence (PRAISE) and provide a cash incentive of P10,000 (US$236) for retirees whether under the optional or compulsory retirement schemes provided that the retirees has worked in the MMDA for 10 years.

A fight for dignity

KKK Council Officer Nelson Azotea is indignant against the MMDA’s neglect of its employees, saying that for years the agency has not provided streetsweepers with hazard pay or funeral assistance benefits. He said the MMDA gives these to outsource employees who are mobilized to demolish urban poor communities or confiscate the goods of itinerant street vendors.

“Our streetsweepers also risk their lives daily cleaning the streets and clearing the gutters. They work under extreme weather conditions, and some of them figure in serious accidents because of speeding vehicles or out of control buses which hit them while they are sweeping the streets or unloading garbage bins. They receive miserable wages, from P5,000 (US$ 11.62) to P7,000 (US$163) monthly. This is the first time after decades that we are demanding immediate and concrete benefits for the MMDA’s poorest employees,” he said.

In the CNA proposal, the KKK wants the MMDA to allow employees chronic illness and disease leave. Apparently, MMDa employees, particularly the streetsweepers and utility staff are prone to upper respiratory disease, bronchitis, asthma, pulmonary tuberculosis, urinary track diseases and all are work-related. The union also wants the MMDA to execute a memorandum of agreement with accredited hospitals like the East avenue Hospital, the Orthopaedic Hospital and the Makati Hospital to admit all MMDA employees involved in accidents in the conduct of their duties. The MMDA is being tasked to shoulder all expenses.