President Benigno Aquino III’s second State of the Nation Address (Sona) delivered last July 25 may have exceeded 6,000 words, yet his speech was “merely filled with convenient lies and half-truths, useless embellishments and hollow rhetoric,” Bagong Alyansang Makabayan-Southern Tagalog (Bayan-ST) Secretary-General Leo XL Fuentes said. He added that Aquino’s one-hour speech may have been, in reality, addressed to the ruling few, because elsewhere, at least in Southern Tagalog, his populist rhetoric does not even begin to approximate the real conditions of the people.

“A year under Aquino’s leadership, the people never experienced any substantial social change, only endless poverty, unprecedented hunger and continuing human rights violations. It is no wonder that the chronic political and economic crises that beset the country still persist, because his administration’s solution to these are shallow and palliative socioeconomic programs,” he said.

Fuentes added that Aquino’s declining satisfaction ratings are indicative of the people’s growing discontent with his administration. “The people are becoming disillusioned with his cloying repetitions of the ‘straight and righteous path.’ Will the people take to the streets and leave the comforts of their daily lives if Aquino delivered on the promises he made a year ago? We can only expect him to praise the achievements of his administration in his Sona, so the members of various progressive organizations in Southern Tagalog opted to expose the real conditions of the people in the region.”

Under intermittent rains, members of progressive groups trooped to strategic public centers in Lucena City in Quezon, Bacoor in Cavite, Cainta in Rizal, Tanauan in Batangas and San Pedro in Laguna to hold the “People’s Sona,” simultaneous with President Aquino’s address. Bayan-ST reported, however, that there were threats to disrupt their protest as members of the Cavite and Rizal police repeatedly attempted to block protestors en route to their protest action sites, as what happened to 41 farmers held by police in Pala-pala, Cavite on grounds of committing vandalism.

Under Aquino, there’s only more of the same

Before President Aquino’s speech was relayed to the protestors through live audio streaming, regional and provincial leaders from various sectoral organizations gave speeches that underscored several people’s issues that progressives said were “deliberately ignored” in Aquino’s Sona. Some of the issues tackled are the following: 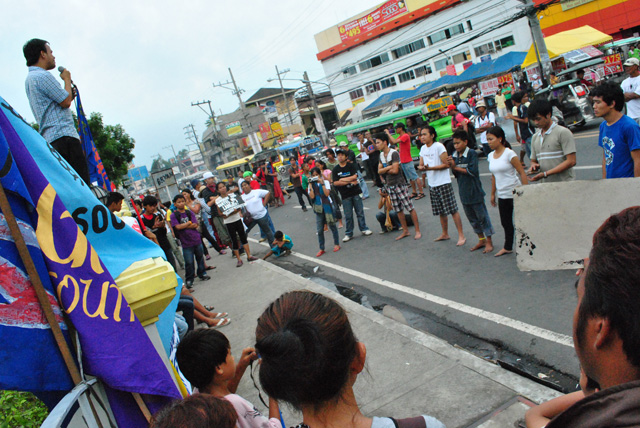 Bayan-ST Secretary-General Leo XL Fuentes lambastes Aquino for “purposively overlooking” the genuine condition of the people of Southern Tagalog in his second State of the Nation Address. (Photo by Jonelle Marin / bulatlat.com)

Landlessness. According to the Katipunan ng mga Samahang Magbubukid sa Timog Katagalugan (Kasama-TK), a total of 394,884 has of land, owned by merely 67 landed clans and 49 real estate and development corporations, are involved in land-grabbing cases in nine provinces of Southern Tagalog, covering 76 municipalities and 168 barangays. Fifty of these land-grabbing cases threaten to displace 156,092 indigents in rural areas.

Urban poor situation. Through Public-Private Partnership (PPP), Aquino’s centerpiece economic program, hundreds of thousands of families were displaced in Southern Tagalog, according to Bayan-ST. In Bacoor, Cavite, up to 100,000 families will face impending demolition to give way to harbor development in the area. Meanwhile, an estimated 400,000 families will be displaced by the Laguna de Bay development project. In the past two months, the houses of around 1,000 families in Calamba City, Laguna were demolished because of alleged land seizure by the Lazaro family.

Workers’ condition and unemployment. There are around 11 M jobless Filipinos today and those with jobs suffer from poor working conditions and low wages, according to the Alyansa ng mga Manggagawa sa Enklabo. The workers group also reported that more than 50 percent of workers in industrial enclaves experience different forms of violence and oppression in the work area. Also, Olalia-KMU said about 80 percent of workers in the region are employed on a contractual basis.

Plight of women. Gabriela-ST lamented the continuing physical and sexual violence endured by women under the Aquino administration, in the absence of comprehensive legislation such as the Divorce Bill and perfunctory implementation of women protection laws. The group said a woman is raped every five hours while 11 women experience physical violence every day. They also condemned the rape of 4 women minors in Sta. Cruz, Laguna by a retired US navy officer, whose case they feared will be whitewashed.

Gabriela-ST also slammed the Aquino administration for resorting to dole outs in busting rampant poverty and cutting back on social spending, particularly health services, which was slashed by some 1.4 B ($32.5 million) this year, forcing public hospitals such as the Laguna Provincial Hospital to venture into eco-enterprises that restrict the people’s access to health care. 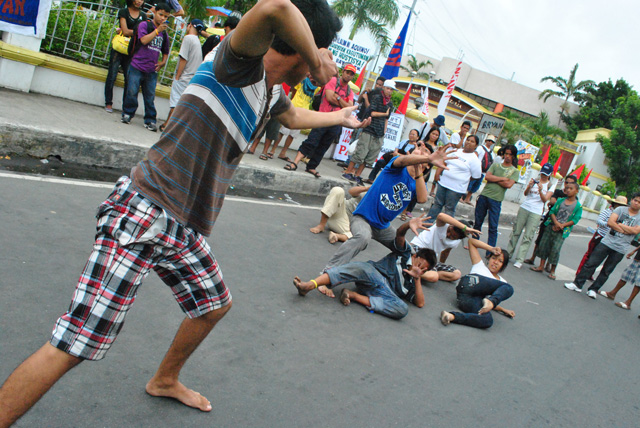 Youth situation. Kabataan Partylist-ST said the Aquino government’s P367 M ($8.5 M) slash in the budget for State Universities and Colleges was felt in various public tertiary schools in the region such as the Laguna State Polytechnic University, Cavite State University, University of Rizal System, Southern Luzon State University and Batangas State University, among others, causing these schools to scout for alternative income generating schemes such as increasing tuition and selling or renting idle assets at the cost of the students’ democratic access to education.

Human rights violations. An average of one member of progressive organizations based in Southern Tagalog is killed every month during Aquino’s one year in power, rights group Karapatan-ST said. There were also two cases of enforced disappearances in the region and a total of 57 political detainees nationwide, including the Calamba 7, a group of protestors who were detained after holding a lightning rally during Aquino’s speech on Rizal commemoration.

Karapatan-ST attributed this renewed spate of political persecution to the government’s counterinsurgency program Oplan Bayanihan, which according to them targets the “neutralization of activists under the guise of community-level outreach and service programs.”

Fuentes also noted that some issues of national concern were not mentioned, not even in passing, in Aquino’s Sona.

“Aquino evaded tackling the issues that matter the most to and have lasting effect on the Filipino people. Not once in his speech did he say anything about the land dispute that hounds Hacienda Luisita in Tarlac or the peace negotiation between the GPH (Government of the Philippines) and the CPP-NPA-NDFP (Communist Party of the Philippines-New People’s Army-National Democratic Front of the Philippines).”

He said the few achievements Aquino boasted in his Sona were in fact the fruits of the people’s collective action.

“He was lying when he said he stopped the planned dredging of the Laguna de Bay because it is the residents of lakeshore municipalities, who were in danger of displacement, who vigorously opposed the project. He cannot even lay claim to penalizing high-ranking corrupt officials such as former president Gloria Macapagal-Arroyo, because the people are the ones who are taking the initiative while he busies himself in chasing after the smaller fish in the government,” he said.