MANILA – The Aquino administration seems to be stuck in the Stone Age.

Or at least it hasn’t caught the internet wave yet.

Kabataan Party-list Rep. Raymond Palatino expressed skepticism over President Benigno Aquino III’s declaration that he was all for “internet for all Filipinos” and for “e-governance.”

Palatino said the President has “misallocated” P1.16 billion budget for telegrams , while allocating not a single peso for the purchase of computers and internet equipment.

In the August 3 budget hearing at the House of Representatives, Department of Science and Technology (DOST) Secretary Mario Montejo said the President has set e-governance, internet for all, and support for the Information and Communication Technology (ICT) industry as the priority areas of the department.

“President Aquino’s ICT programs such as e-governance and internet for all are misleading because of the mismatch in his funding priority. The seemingly modern and technological framework of the DOST is undercut by the misallocated P1.16 billion (US$269 million) budget for telegrams and zero budget for the Capital Outlay of the National Computer Center (NCC) which could be used for the procurement of computers and internet equipment,” Palatino said.

Of the DOST’s proposed 2012 budget of P9.35 billion (US$217 million), P1.16 billion (US$269 million)has been earmarked for its Telegraph Office while zero budget is allocated for the Capital Outlay of the NCC which is the lead government agency for promoting the strategic use of ICT. 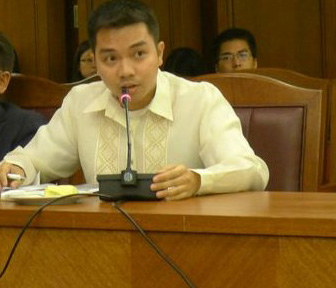 Kabataan Representative Raymond Palatino questions President Aquino’s understanding of the the importance and potential of information and communication technology (ICT) in good governance. He said Aquino’s budget proposal gives priority to funding the Telegraph Office of the Department of Science and Technology (DOST). (Photo courtesy of Kabataan Party-List / bulatlat.com)

“If President Aquino understands the importance and potential of ICT in good governance, I don’t understand why he seems to prioritize the funding of telegrams instead of ensuring people’s access to information technology. I hope the President will review his ICT programs. It would be unfortunate if the benefits of ICT will not be realized due to misdirected funding,” Palatino said.

In a related development, the Agham Scientists for the People group said the massive brain drain phenomenon continues under the Aquino administration.

“Even under the new administration, many science and technology (S&T) professionals still find it hard to secure employment suitable to their skills and expertise. The DOST was able to produce around 1,437 scholar graduates at the end of the 2009-2010 school year, but we have yet to hear of any remarkable development stating where they have all ended up. It is highly unlikely that many of them have been able to secure jobs in the scientific research field given that the industry is very small and almost non-existent in the Philippines. For the last decade, the number of emigrating science workers has ballooned to around two and a half times compared to the figure 11 years ago,” said Agham chairman Dr. Giovanni Tapang.

Tapang noted that last July, the DOST announced that it wants to make internet and communications technology as an enabling tool to help expand and sustain the burgeoning business process outsourcing industry. DOST Secretary Montejo said the DOST has the mandate and the knowledge resources to raise the number of business process outsourcing (BPO) workforce “in a significant way.”
“This emphasis of the government’s S&T agency on the BPO industry has only shown the current mindset of the government with regard science and technology. Instead of strengthening local production of tools and machineries for agriculture and other equally important aspects of the economy, the Aquino government merely continues the tradition of previous administrations by toeing the line of foreign big business and international lending institutions: do away with ambitions of building strong domestic industries and just serve foreign monopolies with cheap English-speaking workforce,” he said.

Free Wi-Fi for the public

Regardless how the country’s S & T industry is limping along, however, Kabataan Rep. Palatino remains a firm believer in Sir Francis Bacon’s declaration that knowledge is power or at least having information is the next best thing.

“The internet has proven to be one of the greatest and most valuable venues where people can exercise their democratic freedoms, from their personal rights as individuals to freely express their sentiments, to the people’s collective rights to air out political opinions and grievances,” he said.

In a report released June this year, the United Nations listed internet access as a basic human right, saying that it is “…one of the most powerful instruments of the 21st century for increasing transparency in the conduct of the powerful, access to information, and for facilitating active citizen participation in building democratic societies.”

Palatino said his measure seeks to push the government into providing democratic access to the world wide web.

“Notwithstanding the issue of the mass accessibility and availability of personal electronic devices that people have to use in order to access public networks, government has to recognize that the internet is an important mechanism in encouraging people’s participation in governance and in democracy. One way to foster this democratic participation is by at least providing Filipinos access to the internet in many, if not all, of our government buildings and public establishments. It will also encourage people to visit and look upon our government institutions as truly public spaces where they can assemble and converge for discussions, talk with government officials, and participate in democratic processes,” he said.

In the proposal, wireless internet connections will be installed and be made available in buildings of all national government offices including its regional and satellite offices, in municipal halls and in provincial capitols, in state universities and colleges, in public parks and plazas, in public hospitals and in public transportation terminals such as airports and public bus stations.

Palatino also made sure to include a provision in his proposal against restrictions, in the form of passwords and other similar mechanisms with regard to access to the free public wi-fi network.

“ Only in cases where there is a clear and present security or technical risk that can’t be remedied through normal technical solutions should administrations or managements of government agencies et al lay down these restrictions and limits. And as want public Wi-Fi to be free, no charges should be laid down against those who access it,” he said.