In the meantime, on one free-standing wall hangs a life-size crucifix festooned with scapulars and rosaries, as well as a red phallus.
Cruz shrugs off the outrage over the phalluses.

“It’s symbolic for patriarchy, a symbol of power. There are those who worship power, who put their faith in men who wield power even if the power is used against women, or against the whole of society. The fight for sexual and gender equality continues, doesn’t it? But the balance continues to be tipped in favor of the phallus. Is this good or bad? You decide,” he said.

(For some, the phalluses could very well represent the leadership of the Catholic Church in the Philippines – a group of grown men deciding on how women in the country do not have the right to control their own reproduction process, much less their sexuality. Currently the Catholic Church is hard at work campaigning against proposals for a reproductive health law. It has also come to a head against calls of the Lesbian, Gay ,Bisexual and Transsexual or LGBT community to allow same-sex marriages in the country — writer)

The former student of the University of Sto. Tomas (UST) is not new to the art scene at all and is in fact well known not only in local art circles, but internationally as well, having opened exhibits in Switzerland, Italy and the United States. He was also recipient of the Ateneo Art Awards in 2007 and awarded the CCP 13 artists awards in 2003.

The man is widely travelled, and has taken time to read up on the cultural history of religious iconography and the origins of religious symbolism.

“Everything around us can be considered as symbols, some are actually only symbols more than anything else. How we understand these symbols, how we use them is what gives them power and meaning,” he said.

Among activist circles, in the meantime, Cruz is known as a performance artist acting out pieces dealing with political issues like the interference of the United States on global affairs; human rights; and militarization. He is also a founding member of the artist group Ugat-Lahi. Ugat-Lahi is credited for the effigies presented and then burned during rallies led by the Bagong Alyansang Makabayan (BAYAN). 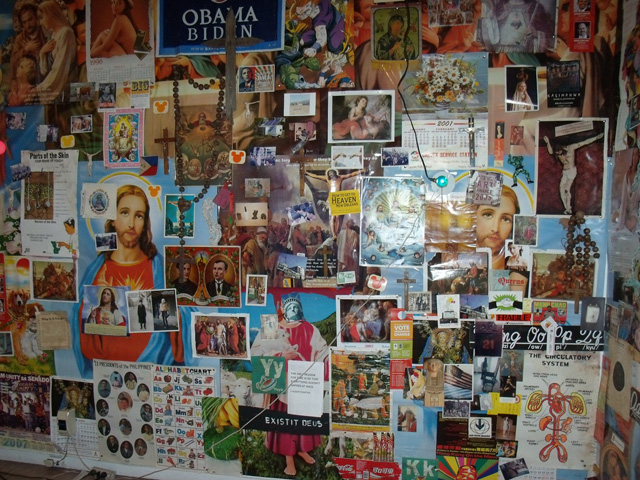 Far from accusations that Cruz is only trying to generate controversy to be noticed, Cruz sheepishly admits that “Poleteismo” is actually the product of house cleaning. Apparently, the man is a pack-rat and for the last two decades he has been collecting various scraps of paper and whatnot with the general intention of some day putting them to use.

“We were cleaning the house and we discovered all this,” he said, pointing to the walls with their thousands of colorful, conflicting images like those from a series of MTV videos from various genres looped together. He and partner, artist and singer Raquel de Loyala usually spend two to three days pasting and putting together the massive collage that has sent religious groups seething.
Close Your Eyes and Think

Cruz frequently tries to shy away from questions that seek his own opinion on his work, but when pressed, he answers even if reluctantly.

“This is how I see the Filipino way of life — colorful, varied, full of conflicting beliefs and values. Can’t you just see these same images pasted on the walls of houses in the urban poor communities? And Filipino society, its racked with economic and political turmoil, and then there’s religion which frequently involves itself in the entire conglomeration of issues and developments,” he said.
Sure enough, if one does as Cruz advises — close your eyes after seeing the images, breathe and think– the walls begin to speak about the Filipino condition.

There’s the carton poster on the alphabet with “A” standing for “Apple” when apples are not grown in the Philippines and “J” is for Jeep and not for “jeepney.”

Then there are the liquor bottles that used to contain expensive alcohol that could very well symbolize the corruption of the country because of the profligacy of its so-called leaders in government.

“I don’t like telling people what I mean when I paint something or what I want to say when I include an image in an installation. I would much rather that people talk about the work and think about they’ve seen,” Cruz said.

If only people would first think instead of being judgmental. In defense of religion and religious beliefs, some quarters have already taken to maliciously attributing Cruz’ controversial work to a “twisted sexuality.”

The artist community has thrown its support behind Cruz and the CPP, saying that ‘Poleteismo’ protected by the provision of freedom of expression of the 1987 Constitution.

The Artists and cultural workers from the Concerned Artists of the Philippines (CAP) in a statement said that they support the CCP, specially its Visual Arts unit headed by Karen Flores, and the organizers of KULO for upholding freedom of expression. 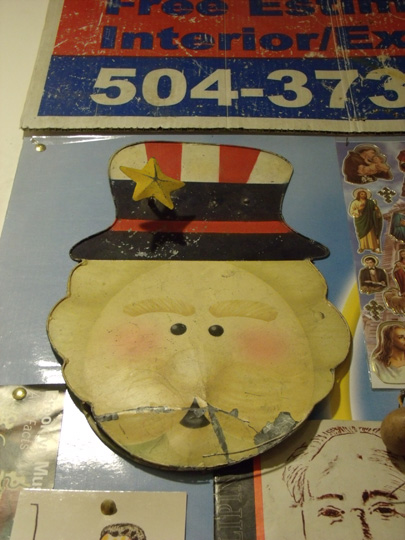 Dr. Bienvenido Lumbera, National Artist for Literature and current Chairperson of CAP said that Article 3 section 4 of the country’s constitution states that “no law shall be passed abridging the freedom of speech, of expression, or of the press, or the right of the people peaceably to assemble and petition the government for redress of grievances.”

“The bishops and the lay leaders who are pressuring the CCP to close the show are within their right to speak against KULO, and they are free to admonish the Catholic faithful regarding what they find objectionable in Mideo’s artwork. We believe, however, that this demand to suppress the show smacks of the religious fascism of the friars of Rizal’s time and certainly unacceptable in the 21st century,” he said.

Lumbera went on to say that CAP welcomes the CCP’s call for a dialogue on the exhibit, believing that criticism of artists’ work is part of the artistic process and contributes to the growth of the artist.

” We caution critics, however, not to resort to intimidation and defamation that threaten the artist’s freedom of expression,” said CAP Secretary-General Prof. Neil Doloricon of the University of the Philippines College of Fine Arts.

“We call on artists and cultural workers from the different fields of art and humanities to stand steadfast against the curtailment of the Constitutional guarantee of free artistic expression that founding CAP Chairperson Lino Brocka persuaded the Convention to insert in the 1987 Constitution. When he advocated support for works “that will hurt…that will not make you rest…For the times are really bad, and given times like this, it is a crime to rest.”