“While landlords receive hefty payments, massive landlessness persists in the countryside. Millions of farmers are displaced due to massive land grabbing and land use conversion. Rural poverty and hunger is on the rise.” Anakpawis Rep. Rafael Mariano

MANILA — Given the Department of Agrarian Reform’s poor performance in land acquisition and distribution, peasant groups questioned the huge allocation for DAR in the proposed 2012 national budget.

DAR will get P17.9-billion ($419.74 million) or 9.82 percent increase from this year’s budget. At least P10.3 billion ($241.53 million) of the proposed budget is allotted for the implementation of the Comprehensive Agrarian Reform Program (Carp) and its extension law.

In its 2010 report, DAR reported its Land Acquisition and Distribution (LAD) accomplishment from 1972 to December 2010 to have already reached 6,617, 296 hectares. Since CARPer’s enactment in 2008, DAR said 154,007 hectares were distributed. But only 292,753 hectares were acquired through compulsory acquisition or only 6.9 percent of the target under LAD, underscoring the worsening circumvention of land distribution.

“A big chunk of DAR’s budget for CARPer will go to landlord compensation” Anakpawis Rep. Rafael Mariano said. “DAR, through the LAD provision of CARP and its extension law, has conveniently became a milking cow of big landlords and maintaining monopoly over large landholdings.” 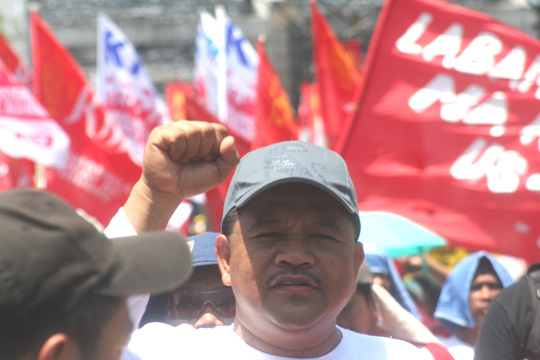 Mariano branded the fund allocation for CARP in the 2012 DAR budget as “wastage of public funds.”

According to the Congressional Policy and Budget Research Department of the House of Representatives, since CARP implementation in 1988, the total allotment released for the implementation of CARP had reached P207 billion ($4.85 billion) and 94.7 percent of this amount was already utilized as of December 2010. Of the total allotment, 55.4 percent went to DAR and 31.7 percent was released to the Land Bank of the Philippines.

“Where did these funds go? Obviously not to farmer-beneficiaries who are in dire need of support services from the government,” Mariano said.

“Under the guise of just compensation, only big landlords and bureaucrats benefited from the budget of CARP,” Danilo Ramos, secretary general of Kilusang Magbubukid ng Pilipinas (KMP).

Citing figures from Ibon Foundation, Ramos said that “from 1972-2008, landlords have received P289 billion ($6.76 billion) in payments for 1,619,513 hectares by virtue of the government’s failed land reform programs.”

“Southern Tagalog has been the laboratory of land-use conversions. Vast hectares of farmlands have been transformed into industrial enclaves, commercial centers and so-called ecotourism projects such as golf courses, courtesy of the provisions of the sham CARP itself,” says Villanueva.

“In fact, a total of 394,884 hectares in Southern Tagalog are still locked in agrarian disputes. This clearly shows that the number of agrarian cases in the region are far bigger and put into question the so-called accomplishment of the DAR,” the peasant leader said.

“The P545.9 million for the bogus CARP in Southern Tagalog is a total wastage of taxpayer’s money,” Villanueva stressed.

“CARPer, just like previous land reform programs implemented by previous governments, maintains its bias toward landlords by giving them ‘just compensation’ in exchange for land distribution as opposed to distributing landholdings for free and all rural wealth justly to farmers who have been tilling and making the land productive,” Mariano said.

“While landlords receive hefty payments, massive landlessness persists in the countryside. Millions of farmers are displaced due to massive land grabbing and land use conversion. Rural poverty and hunger is on the rise,” he added.

“The sham CARP deserves a zero budget,” Ramos said, calling the budget for CARP as a “milking cow” of big landlords and bureaucrats.

Ramos cited Hacienda Luisita which remains at the hands of the Cojuangco-Aquinos in Tarlac, the Hacienda Looc and Hacienda Yulo in Southern Tagalog that remain undistributed and are now “targets of widespread land-grabbing and land-use conversion courtesy of the bogus CARP itself.”

Mariano filed a bill on genuine agrarian reform that, among others, provides for free land distribution for the tillers.