After 11 Ramadan behind prison bars, Basilan 73 cry for justice

“Justice has been too slow and elusive to the Moro victims of Arroyo’s fascist reign. Many of the victims who belong to the poorest sectors of Moro society have been languishing in jail for 10 years now.” – Moro Christian Peoples’ Alliance

MANILA — Myrna, 54; Soraida, 37; and Elsa, 31, were all clad in their traditional Muslim outfit when they marched from Tandang Sora to Sandigang Bayan along Commonwealth Avenue in Quezon City in the protest action during Aquino’s second SONA. It was also one week before the holy month of Ramadan would begin but these women joined the march.

Like many sectoral and indigenous peoples’ garb, the Muslim attire attracted members of the mass media covering the second State-of-the-Nation Address (SONA) of Pres. Benigno Simeon C. Aquino III. Like each of the thousands of protesters, the three Muslim women said they joined the protest to bring to the public attention the plight of their respective husbands, jailed for ten long years now at the Camp Bagong Diwa in Taguig, Metro Manila.

Each has a story to tell the public and the president. Citing the Ramadan, Myrna said she wanted to appeal to the Aquino government to look into the case of the Basilan 73, or the group of Muslim peasants and youth rounded up in a series of government-led crackdown against the Abu Sayaff in July 2001.

“We can still do our daily fasts inside the jail, but it is the release of our detained kin that we have always been yearning for,” Myrna said in broken Tagalog with southern accent.

Known now as the Basilan 73, they are among the alleged ASG members charged with serious illegal detention for allegedly kidnapping 52 students and teachers of Tumahubong Elementary School in Tipo-Tipo, Basilan on March 20, 2000; the ASG attack on Dos Palmas Resort in Palawan that resulted in the kidnapping of its guests including American missionary couple, Martin and Gracia Burnham on May 27, 2001; the Lamitan siege on June 2, 2001; and the attack and beheading of 10 farm workers of Golden Harvest farm in Lamitan, Basilan on June 11, 2001.

Myrna’s husband, Adjuron Patta, now 54, has been diagnosed with hypertension, perhaps due to his long stay inside the prison, or due to his age or faulty diet, or all of the above.

According to the Moro-Christian Peoples’ Alliance which facilitated the medical mission conducted recently among the Basilan 73, Patta’s hypertension might be a symptom of a more serious health condition. Medical doctors may refer Patta’s case to specialists for a more thorough checkup.

Myrna said the health situation might improve outside of prison. She wanted her husband released immediately. She said Adjuron’s release papers were ready when the order for transfer of the group to Special Intensive Care Area (SICA) of the Camp Bagong Diwa began to be implemented in November 2001. Myrna and his lawyers were caught flat-footed when they did not see Adjuron on the day of his release.

They found him several months later because he was transferred to Camp Bagong Diwa. Myrna still holds a copy of the release order to this day. ??Their 18-year-old son can no longer go to college for lack of support. Myrna left him under the care of his grandparents when she traveled to Manila to check on the situation of Adjuron.

“We are hoping that Aquino would fulfill our wish to free Adjuron from prison and let him live with his family. Up to now, we are groping in the dark. In his second year, I hope Aquino could set him free together with the others who have nothing to do with the ASG. It just so happened that we are Moros,” Myrna emphasized.

Soraida and Alih Mandangan got married while he is detained at Camp Bagong Diwa. Her husband, she said, has wasted his youth behind bars. At 28, Alih has been in prison for more than ten years for a case of mistaken identity. According to Soraida, the military was then looking for a certain Alih Malabon, allegedly involved in ASG operations in 2001. Because his name happened to be Alih, he was picked up as well. 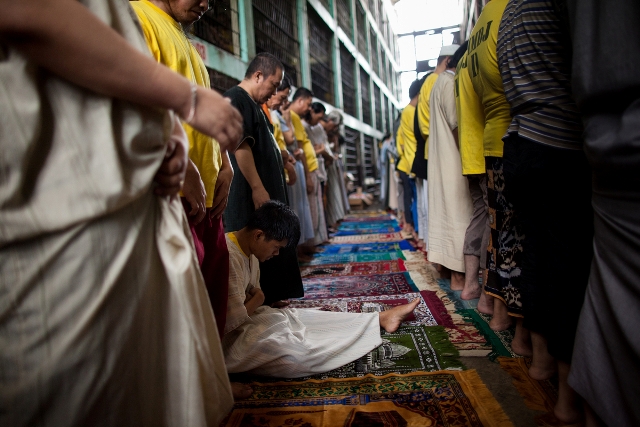 Alih was attending a clan reunion in Mariki, Zamboanga City in 2001 when the crackdown happened. He was arrested with some 200 others who were then brought to Metro Manila and jailed since then.

“What is wrong here is that he was jailed because of a mistake,” Soraida said when asked what she thinks is not good at the Camp Bagong Diwa detention cell. She visits daily except Mondays. She cooks, washes his clothes and buffs the sleeping quarters, to make their married life “normal”. She goes home to Maharlika Village every night.

Love in time of detention?

Yadzri Shuaib, 28, and Elsa, have a two-year old daughter from their four-year marriage. She had to entrust the child to relatives because she decided to go to Abu Dhabi in the Middle East to earn for her daughter a bright future. Earlier she had gone to Lebanon, but it was cut short because of her pregnancy.

While waiting for her flight to serve a new employer, she brings cooked food to sell to other detainees and prisoners in Camp Bagong Diwa. She also sells outside to earn a living. Yadzri was detained for a year in Zamboanga City after he was arrested in 2003 and accused of being a member of the Abu Sayaff Group.

Myrna, Soraida and Elsa are just three women affected by the continuous detention of their husbands who all claim to be innocent of the charges filed against them.

?”One detainee has been found to have been bleeding internally. The unnamed detainee has to be released soon on humanitarian ground,” said Antonio Liongson, national coordinator of MCPA. Basima Majiri, 42, is blind due to severe diabetes that was left untreated in the detention camp.

Idris Tumpilan, 37, has abdominal pains, he hyperventilates and has high pulse rate when doctors saw him. The medical mission recommended his immediate referral to a gastro-enterologist. They also recommended that an endoscopy and blood analysis be done to gauge his condition more thoroughly.

These are just a few of the prisoners needing immediate medical attention and who must be freed on humanitarian grounds. Others are now very old to still be in jail. They have even grown older than their physical age. Many of them have wasted their youth, when they could have been a potent force to effect true development of Muslim Mindanao, said Liongson.

While Alih is trying to make the most of his time even though in jail, the real Alih Malabon was reportedly killed in an encounter with Scene-of-the-crime operatives (SOCO)long ago. Considering that he was mistakenly imprisoned, his relatives and friends are now seeking no other option but for the government to do justice and do measures to right a wrong.

While the crackdown that led to the arrest of more than 200 civilians happened under then President and now Pampanga Rep. Gloria Macapagal-Arroyo, the Aquino administration perpetuates their detention while turning a deaf ear to the pleadings for their immediate release. He is also not ordering a reinvestigation of their cases.

“Justice has been too slow and elusive to the Moro victims of Arroyo’s fascist reign. Many of the victims who belong to the poorest sectors of Moro society have been languishing at Camp Bagong Diwa and Basilan Provincial Jail for ten years now. Worse, they were placed in prison cells along with the real Abu Sayyaf members and leaders,” said MCPA in a statement.

A glimpse in Philippine history and politics

On July 13, 2001, more than 200 Moro men were rounded up in Basilan, Sulu, Tawi-Tawi and the entire Zamboanga Peninsula as a consequence of the State of Lawlessness declared by Gloria Macapagal-Arroyo. This was her administration’s drive to supposedly wipe out the Abu Sayyaf.

An intensive military crackdown ensued with the 103rd Infantry Battalion of the Philippine Army in Basilan rounding up more than 200 Moro youth, farmers, fishermen, tricycle drivers, vendors and religious leaders. They were illegally arrested, detained and tortured to admit that they were the ASG members, supporters and sympathizers listed in the military’s order of battle.

The cases of the Moro detainees worsened when former US President George Bush declared a “war on terror” in response to the September 11 bombing of World Trade Center twin towers in New York and Pentagon Headquarters in Washington, DC in the US.

The Abu Sayyaf was included in the list of US-declared foreign-terrorist organizations and identified as an Al-Qaeda terrorist cell. Hence, crimes committed by the Abu Sayyaf were considered international crimes. This then led to the US government intervening in the case filed against the ASG and helping in cracking down the ASG in the form of military exercises under the Visiting Forces Agreement (VFA) and the Rewards for Justice bounty system.

For these Moro political prisoners, part of the more than 350 that the human rights watchdog Karapatan has documented, there is no better way to do the Ramadan than in the comfort of their own homes with close family members and relatives sharing the peace that each Ramadan aims to achieve.