DLUMAY, Sarangani — We were trekking the Lunkan Range for nearly six hours. Exhausted and thirsty, I was desperate to reach Sitio Dlumay at the soonest possible time. There was hardly an opportunity to crack a joke regarding what we were going through. But while I was bravely walking down a ravine, I noticed a woman, in her early fifties, sitting down along the road, laughing while hitting the ground with her hand.

“What’s so funny?” I thought to myself. Well, if you are also curious why, allow me to take you back to Day 1.

My fellow writer Len phoned me on August 5, asking if I am interested to cover a fact-finding mission in Sarangani. Upon seeing the itinerary of the fact-finding mission, however, I was somehow reluctant to join as it includes an 8-hour trek to reach the community that we would visit. I thought that I might not be physically fit to endure it. Until now, actually, I don’t know why I agreed to go.

I arrived at General Santos City on August 9, along with four other participants. I got to hear more dreadful stories about the 8-hour trek during the orientation. It made me even more anxious. If there was anything that consoled me, it was the fact that I would not go through it alone. The following morning, in a “weapon” (or big truck), our journey to Dlumay began. 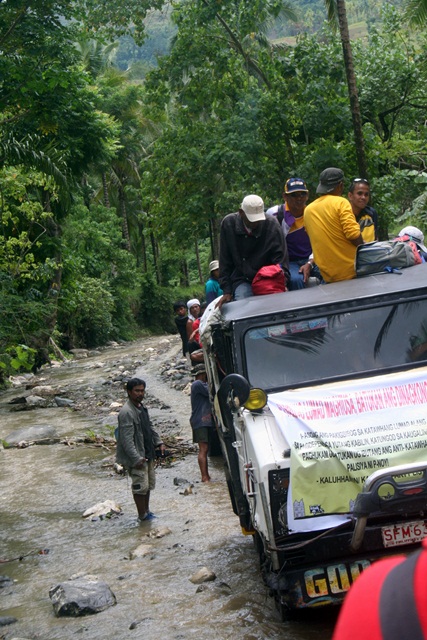 One of the three weapons passing through the Suyan River(Photo by Janess Ann J. Ellao / bulatlat.com)

Along the national highway, we took the trip in stride. We woo-ed and wee-ed every time the weapon would bank in one direction to another. But Maricel Salem, head teacher of Blaan Learning Community Center, or as I fondly call Teacher Lisa, told us that we should brace ourselves as we would be “crossing” the Suyan River in a while.

A few minutes later, I understood why. We did not cross the river. We passed through the Suyan River.

It was far from anything that I had expected. The weapon tilted sideways as it passed on big boulders. It was almost hard to decide who screamed the loudest: the participants or the weapon’s engine. In fact, a few minutes later, I was too scared to photograph our trip, entertaining thoughts that the weapon might tumble down the river or fall sideways.

I am very sure that Sarangani’s “river highway” is a first of its kind. Even other participants, including Kabataan Rep. Raymond Palatino, who had visited other far-flung communities said this is also the first time he has experienced such. Yet, it is not something that the Sarangani province should be proud of.

I could hardly remember how the weapon reached the village proper of Upper Suyan. All I can recall is how thankful I was that we were all safe. Inside a classroom of Milliona Elementary School, I fell asleep while convincing myself that I would survive the trek the following morning.

Good thing that I did. But no one said it would be easy. At around 4:00 a.m. the following morning, we geared for what the day held for us.

The first steep slope was one of the hardest. I had to take off my sandals so that my toes could grip tightly into the mud. The locals had to pull me up in the many instances that I could no longer lift my foot. If not for them, I and other weaklings in the group would have never been able to make it.

We walked, hiked and trekked the Lunkan Mountain Range of Sarangani for more than eight hours to get to Sitio Dlumay, which is on the other side of the mountain. One of the most difficult parts of the trek was when we were a few meters away from the highest point of the Lunkan Range. Our group called it “Intramuros” or the walled city of Manila because it felt like walking between stone walls, climbing a spiral staircase on our way to the top, which the locals call “terminal.”

It took us six hours to get to the terminal. It was hard to resist having your picture taken once you reach the top. It was after all a product of my ora et labora. I also had pictures with a couple of people, who have helped me along the way, for keep’s sake. 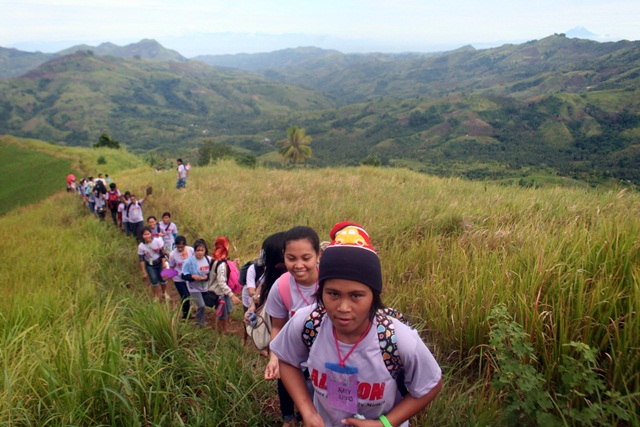 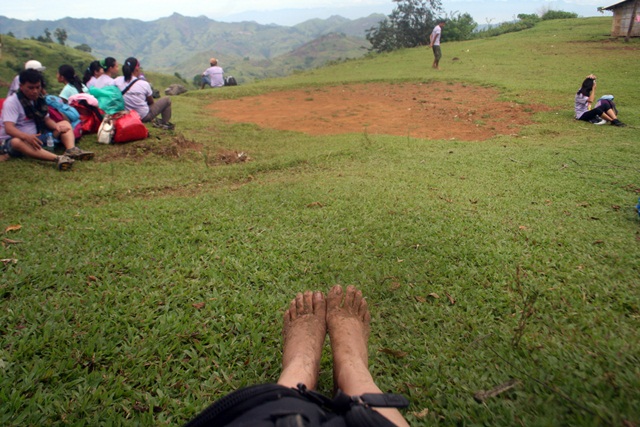 All the difficult parts of the trail were highly compensated with the beautiful mountain ranges of Sarangani. I tried to give justice to the beauty of the Lunkan mountain range through my photos. But somehow there is a big disparity between what I was seeing before my eyes and what was being shown in the camera’s LCD display, though you can also put the blame on my poor photography skills. Many had to stop along the way not just to catch their breaths but also to have their pictures taken.

From the terminal, it would take another two hours to get to the Dlumay community. The problem, however, is that it began to rain. And as the rain trickled, the soil turned into mud, and mud spells disaster. There was a time that I almost fell into a ravine because the trail became too slippery. It was a good thing that Pastor Edwin Egar managed to grab my arm.

In another instance, however, I had to bravely walk down to a ravine because the trail became too slippery. This was where I saw the woman, who seems to be in her early fifties, sitting down, laughing and hitting the ground with her hand. She laughed harder when she saw the foreigner also struggling down the ravine. I was very curious so I asked one of the locals why she was laughing and he told me that the woman could not believe that there were so many people who wanted to visit their community, let alone a “white guy.”

An hour later, I could already see Sitio Dlumay from afar. And as I went nearer, it was hard not to notice that the people living in Sitio Dlumay and in other sitios lived a very simple and humble lifestyle. But later on, when I had the opportunity to immerse with them, I thought of how the word “poverty” has become an understatement to what they are going through. Is this living or merely surviving the harsh world that we live in?

Sitio Dlumay and its surrounding sitios are obviously the forgotten people of Sarangani. No wonder that the woman was laughing that hard upon seeing the “white guy” and the flock of people coming to visit them. 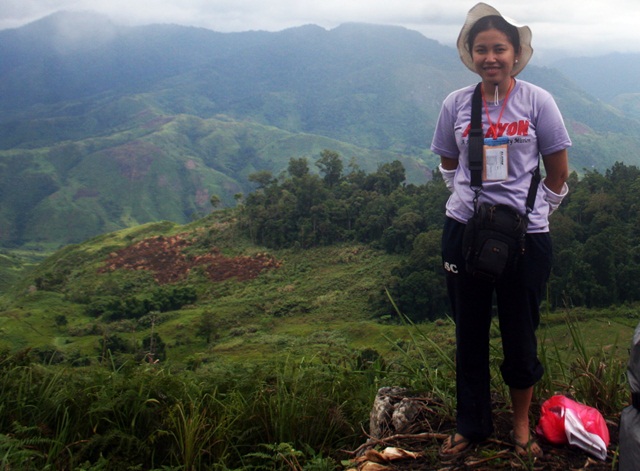 Me at the terminal (Contributed photo / bulatlat.com)

Upon reaching Sitio Dlumay, I was overwhelmed with the warm welcome of the Blaans. We might not be able to talk to each other because I don’t know how to speak their language, their eyes and smiles did all the talking. It was also hard to resist the charms of the children, who, upon seeing their photos, would look and smile at you.

These good people have been isolated from the rest of the Sarangani province, in terms of access to their community. But their isolation is rooted even more deeply from the lack of social services that reach their community. The tough trail to Dlumay highlights the ineptness of the Philippine government to ensure that the welfare of its people is taken cared of. The human rights violations, the military detachment that uses the community as a human shield, and the impoverished conditions of Blaan people deserves another story.

I left the community on the third day with a heavy heart. While taking our last minute pictures with the children, I could feel my eyes welling up. I struggled to keep it to myself but Bro. Arvin of PCPR caught me off-guard when he asked me: “You were affected, right?” And you can guess what happened next.

My admirations for the teachers of the Blaan Community Learning Center soared. The sacrifices they have made – leaving their family behind to dedicate their lives in promoting literacy in Sitio Dlumay – is truly remarkable. On the other hand, my experiences in Alayon mission has changed me in so many ways. I found new friends. I’m sure I would never trade this experience for anything else.

As I took my first few steps away from the community, I wanted to have one last glance at the community. But I was afraid that I might burst into tears again. Then, someone shouted, “Ay, the cause of the traffic!” So I started to walk again. I turned to leave with a promise that I will do everything I can to help the Blaan people, especially the children.