You Are Here: Home → 2011 → August → 25 → Encampment in communities, instilling fear, part of ‘peace and development’ operations?

DLUMAY, Sarangani — (Second of two parts) In an effort to document the human rights violations being perpetrated on the Blaans, Clans organized a peace and solidarity mission to visit Sitio Dlumay. More than 150 reporters and members of NGOs responded to CLANS’ invitation.

The participants left General Santos City on August 10. They spent the night at Millona Elementary School in the Upper Suyan village proper before heading to Sitio Dlumay the following morning. It took them more than eight hours to trek the Sarangani’s Lunkan Range to reach Sitio Dlumay, on the other side of the mountain.

There are about 15 to 25 households in Sitio Dlumay. At the heart of one of the row of houses sat a make-shift military camp. Around ten soldiers in camouflage uniforms could be immediately seen walking around or sleeping on a hammock, with their M16 rifles ready.

When asked why the 73rd IB stationed their camp within the community, Private first class Jake Maniha said they are not there to fight but as a part of the government’s “peace and development” team. He said their purpose was to make sure that no “bad elements” could enter the community. He added that these bad elements, which he described as their “brothers who wandered off the right path,” would never dare engage soldiers in an armed encounter because of the community. “They are good in that way,” he explained.

“This means that they are using the community as a human shield,” Sr. Marife Vargas, MSM of the Rural Missionary of the Philippines, told Bulatlat.com, “With this, they would only bring chaos to a peaceful community. They are risking the lives of innocent civilians.” 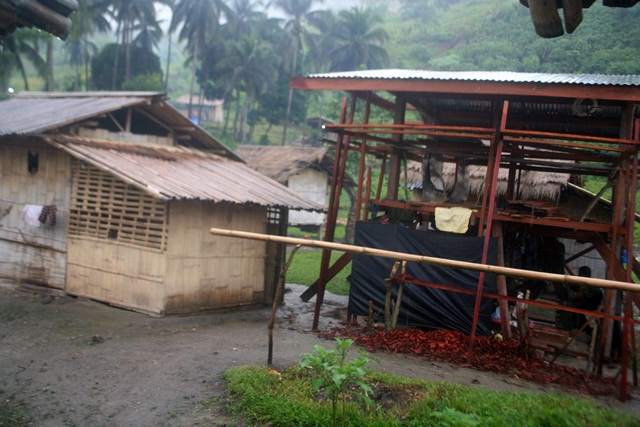 Arlene Alonzo, executive director of Clans, said even Sarangani’s local government fails to see anything wrong about the militarization of Sitio Dlumay and neighboring Sitio Datalnay even as International Humanitarian Law (IHL) and the Comprehensive Agreement on the Respect of Human Rights and International Humanitarian Law (CAHRIHL) clearly state that the “civilian population shall have the right to be protected against the risks and dangers posed by the presence of military camps in urban areas and other populated areas.” Alonzo said local government officials told her “it is the prerogative of the military.”

The mission described the militarization as “synchronized” violations of international humanitarian law.

In a counter-affidavit submitted by the 73rd IB, LTC Adolfo Espuelas Jr. said their mission was to conduct Internal Security Operations “to ensure a physically and psychologically secure environment conducive to economic development,” under Oplan Bayanihan.

Espuelas called the interrogation of teachers as mere “informal inquiry.” It was in the middle of the so-called queries that “Clans got mad on the soldiers and suddenly burst into black propaganda campaign,” he said. Espuelas added that it is not their policy to “threaten, harass or intimidate the people as they conduct the Peace and Development Outreach Program in the communities.”

However, the psychosocial therapy sessions held by the Alayon mission with the children revealed otherwise.
While some children were narrating their experiences with the soldiers, an eight-year old boy blurted out: “Be careful about what you say. The soldiers might get you!”

One of the members of the psychosocial team noted that the children were very alarmed after hearing that. “In itself, it curtails freedom of expression,” Reina Requioma of Salinlahi said.

Familiar with the eight-year-old boy, Salem said, the boy is a kind-hearted and courageous kid. “This is grave and worrisome,” he said.

In a joint statement, Salinlahi Alliance of Children’s Concerns, Children’s Rehabilitation Center and the Association for the Rights of Children in Southeast Asia, said these “inhumane acts are causing terror and trauma to the young minds of these children.” They added that that it would stunt their development.

“I am saddened by the conditions of the Blaan people. I can see how they are being neglected by the government when they need the help most,” Vargas of the Rural Missionary of the Philippines said. “Yet, the government also does not want the likes of Clans to fulfill the responsibilities that they themselves have seemingly forgotten.”

In a statement, Clans said, the teachers were shocked by the sudden militarization of the community when, for the past four years, both the military and the NPAs had been passing by the area and nothing happened. The teachers and members of Clans were never harassed, interrogated nor hurt during those years. “Neither did any of those armed group encamp in the communities.”

Clans said they saw a copy of the Notice of Application for Exploration Permit dated February 19, 2008 by the Tandem Exploration and Mining Corporation. It covers 16,294.5 hectares that includes Upper Suyan village. Residents of Dungan Bahay, on the other hand, have seen Tagalog-speaking people extracting soil from their village in 2008.

“Is this the reason behind these violations? To drive away Clans so that the Blaans will stay illiterate and destitute and therefore incapable of resisting the encroachment of the said mining company?” Clans asked.

Joan Jaime of Kalipunan ng mga Katutubong Mamamayan ng Pilipinas told Bulatlat.com that there is militarization both for counterinsurgency and protecting the so-called development projects. She said that while the military can “go ahead and look for their enemies, the indigenous peoples should be treated as civilians.”

But many times, Jaime said, quelling the efforts of indigenous peoples to defend their ancestral domain is being categorized as part of “counterinsurgency.”

“The government always commits ancestral lands to foreign investors and, of course, the indigenous peoples would fight for it. This has been recorded in our history, even way back during the Spanish colonial period. There are groups, however, who may not have a history of engaging in wars but who have learned to fight because of the need to survive.”

“The situation of Dlumay is reflective of the situations of the many indigenous communities facing large-scale mining,” Kamp said in a statement. Jaime added that their organization has been monitoring 10 regions where there are cases of militarization and corresponding human rights violations in indigenous peoples’ communities.

“So basically, it is a nationwide attack on IPs.” She said that from June 2010 to July 2011, Kamp has monitored eight cases of extra-judicial killings, and four political prisoners (two of whom have been released on bail), among the ranks of indigenous peoples.

Kamp also said in its statement that under the guise of peace and development, communities are being cleared “to give way to so-called development projects and businesses.” The Blaan ancestral land, the group added, is a target for mining operations by Tandem Mining Company and Shamrock Mining Company. This, according to KAMP, is the “clear motive for militarization, vilification and harassments.”

“Militarization aims to clear not just the NPAs but also the people’s organizations who would possibly resist mining, including Clans,” Jaime said.

President Benigno S. Aquino III’s administration, Kamp said, has further relaxed its regulatory policies on mining as it is a key part of the government’s economic plan.

The Alayon Mission, upon seeing the situation in Sitio Dlumay, demanded the immediate pullout of the 73rd IB from Upper Suyan village. It urged all government agencies concerned to conduct an investigation on the reported harassments committed by the soldiers, especially against the children. It called on Congress to review the Internal Security Plan Oplan Bayanihan, which is being used by the military to justify their encampment in a civilian community.

The Alayon Mission called on the local government of Sarangani province to “protect the rights of the residents, especially of the children, to deliver social services to the hinterland communities,” and to sustain support to the Blaan communities in their projects that include the literacy school, sustainable agriculture, health and mini-hydropower plant.

As for Lasib, she said, her only wish is for the Philippine government to let them continue providing education to groups in high need of it such as her fellow Blaan. Clans and its BLSLC, Alonzo said, would continue to expand its projects despite military harassment. Lasib said, “We will continue our service to the children to offer them a better future. We could not turn them into professionals, as we know it, but at least, they would be literate.”