“Our lives as Blaans are not affected no matter who wins the national elections. It is these non-government agencies who have been doing a big chunk of their work to improve our lives. So no one could take that away from us.”

DLUMAY, Sarangani — Francisco Manangka, 35, was born and raised in Sitio Dlumay, a small community in Barangay Upper Suyan, Malapatan, Sarangani. He was introduced to hard work at a very young age. The poverty that has stricken their community did not make it conducive for him to pursue his studies or play with his friends on a sunny afternoon. All his life he worked hard for his family to survive.

“It is very hard to live here. The poverty goes on and on, like it would never stop. When people get sick, you would be lucky if you can still make it to the village proper alive,” Manangka said in Blaan language.

For a living, Manangka plants corn, rice and peanuts in a piece of land he inherited from his father. He raises a few pigs, chickens, and his one and only carabao. He sells most of his produce while keeping some for his family. With five children to feed, Manangka’s meager income as a farmer could hardly suffice for their needs.

He feared that the same cycle awaits the next generation, his children. Manangka said he does not know how to read and write. He could barely count his own money. “My only dream is for my children not to suffer the same fate as I have. I want them to go to school, learn how to read and write and count one, two and three,” he told Bulatlat.com.

“Life is hard for illiterate people like me. I could not even assert if I am being shortchanged, to know if they declare the weight of my produce correctly and if they paid the corresponding amount,” he added. 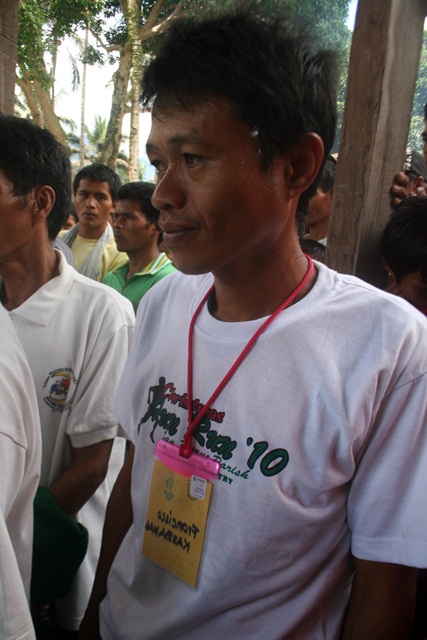 So when the Center for Lumad Advocacy and Services (CLANS) and Sibol ng Agham at Teknolohiya (Sibat) came into the picture, Manangka had high hopes that their life was about to change big time.

Manangka said their community was long-neglected by the government, as the Blaan people could hardly avail of basic social services. In his lifetime, only one doctor, under the banner of the government’s Civic Action Group, visited the people of Sitio Dlumay. Thus, he considers the programs of non-government agencies as a good opportunity that would really uplift their living conditions.

When voted as president of Kasbakas, which is a vernacular word for unity and the very same a local organization that would be receiving the micro-hydroelectric project and consequently the multi-grain miller, Manangka said, he was very glad for the opportunity to serve his fellow Blaans. “I would really like to make this project work,” he said.

Eventually, Clans and its partner organizations and institutions came up with an alternative learning center, recognizing the need to promote literacy among the Blaan people. The Blaan Literacy School and Learning Center was established in 2008, where two of Manangka’s children eventually studied.

All went well until on March 11, 2011, soldiers from the 73rd Infantry Battalion arrived in their community and started to interrogate leaders and teachers of Sitio Dlumay. Among the soldiers were Sgt. Jeff Cabawbaw, Sgt. Roldan, Sgt. Frek and Sgt. Cordero and three members of the Citizen Armed Forces Geographical Unit, which were identified as Kingkong, Gapa and Butchoy.

“The soldiers, Sgts. Frek and Cabawbaw, repeatedly went to our house, telling us that we should not believe in Clans. They said they were merely deceiving us, saying that the teaching style of the teachers are similar to that of the NPAs,” Manangka said in his affidavit. The NPAs or the New People’s Army is the armed wing of the Communist Party of the Philippines.

But Manangka told Bulatlat.com that he does not believe the school is being run by the NPAs or that the teachers would teach their children to arm themselves and fight the government. “My children can now read and write. They know how to count. I am proud of them because someday they would be able to land work somewhere else,” he said, “It is far from anything that they claim.”

Manangka’s fear of the military, he said, was rooted when he was only 18 years old. A soldier then barged into their homes and demanded that Manangka bring out the NPA that he was accused of helping. When he said that there was no one in their house but their family, the soldier pointed his gun at Manangka.

“Since then, I feel scared just by looking at them,” Manangka said.

So when the series of interrogation did not cease, his uneasiness toward the military continued to a point that every time he sees a soldier, “I always think that it would be my end.”

During the interrogation, the soldiers said the NPAs are stealing the funds of the micro-hydro power plant and it is the reason behind the delay of its installation. The interrogation went on for about two hours or until Manangka’s wife Nora became very angry with the soldiers, prompting them to leave their home.

On March 14, at around 7:00 p.m., the soldiers, this time Sgt. Cabawbaw with Frek, went to the Manangka’s home again. “They were very mad, telling me that I should go out and report what I did for that day. I was forced to go out and answer their questions repeatedly even if I was having stomachaches,” he said, “This time, my wife was really angry, shouting and asking them to leave. They were forced to leave again.”

But on March 22, Sgt. Roldgan and a certain Simolde forcibly brought Manangka and eight other leaders to the 73rd IB military camp under the guise of the Malapatan mayor’s invitation. “I did not want to come with them because I have errands to do on our farm. I also do not want to leave my family alone. But I feared for my security and the welfare of my family. They were armed and we were helpless.”

They stayed in the military detachment until the 25th, when the 73rd IB also invited a television news station to visit and interview the Blaan leaders against their will. Later that day, the leaders were brought to Daan Suyan, a village next to their community. But just when the leaders thought they were free from the soldiers, the soldiers returned the following day and started living at Manangka’s residence.

“We were displaced, forced to move to the small hut we have in our farm. I did not want to leave our house because the farm might be too isolated that the rest of the community would have no idea on what might happen to us,” Manangka said, “I felt even worse when my wife had to use our neighbor’s restroom. I feel that they were disrespecting us.”

Sometime in April, Sgt. Roldan left Sitio Dlumay. But another Lt. Makiling arrived. Manangka said that since then, the interrogation have stopped. But one of his biggest concerns as of the moment is how to get the teachers back to Sitio Dlumay.

“Everything that happened has caused fear, worries and anger among the people toward the 73rd IB,” Manangka said, “They brought chaos to our peaceful yet impoverished living.”

Manangka said their community have never benefited from any government project. He added that the government could hardly be felt in their community. “They only come here during elections. They would promise us that they would build us school and give us livelihood. Obviously, it never happened.”

Last elections, Manangka said, all the local government managed to do was give them several feet of black hose for their water system. “That was the first and it may never happen again until before the next elections.”

When asked to bring their concerns to the national government, Manangka said, President Benigno Aquino III remains to be “a mere photograph” of the new administration. “Our lives as Blaans are not affected no matter who wins the national elections. It is these non-government agencies who have been doing a big chunk of their work to improve our lives. So no one could take that away from us.”