Romilyn Ergy Ibañez adds to the growing list of OFWs who were killed or became victims of rape and violence but whose cases remain unsolved and the perpetrators got off scot-free.

MANILA — After a year of mourning for their relative, overseas Filipino worker (OFW) Romilyn Eroy Ibañez who was murdered, the victim’s closest kin are reliving their grief and outrage.

Romilyn was only 22 when she was murdered in Saudi Arabia in September 2010. Her body was brought back to the Philippines only earlier this week. Her family has sought the help of Migrante International and its chapter in the Middle East after they saw how Romilyn’s body was mutilated and burned.

Migrante-Middle East (M-ME) regional coordinator John Leonard Monterona said last Sept. 10, he received an e-mail from Romilyn’s sister saying how shocked she and the rest of their family were after seeing Romilyn’s savaged remains.

In a letter in Filipino, Romilyn’s sister Mira told Monterona that her sister’s body arrived but it was missing an eye and her tongue. It was also discovered that her internal organs were also missing.

“Her body has so many wounds and she looked liked a roasted pig. All the documents we received about her case are all photocopies– no originals,” she said. Mira’s grief is palpable in her letter, which is full of questions about her sister and the horror that befell her. 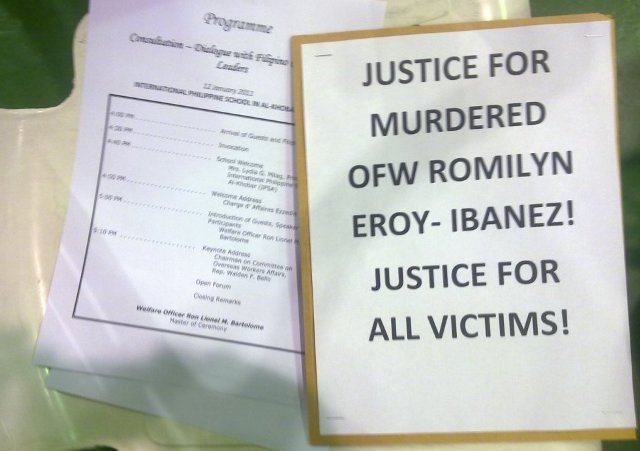 A petition calling for justice for the murdered OFW.(Photo courtesy of OFW Journalism.blogspot / bulatlat.com)

On Sept. 2 last year, Romilyn was rushed to the hospital after a staff of the International Red Crescent reportedly found her in the kitchen of her employer’s house in Al-Khobar in the eastern part of Saudi Arabia. Romilyn was found on the floor drenched in her own blood. In an initial report to the Department of Foreign Affairs (DFA) in Manila, the embassy said Romilyn had knife wounds in her neck, abdomen and wrist as well as acid burns in her mouth, arms and legs.

“Reportedly, an almost empty container of sulfuric acid was taken from the scene,” the DFA said in its report.

The Red Crescent staff then reportedly rushed her to the hospital, but she was pronounced dead by the hospital’s attending physicians on September 8.

The cause of her death, as per the hospital’s physicians who attended her, was acid ingestion. Her body was also found to be bearing several stab wounds.

Romilyn was originally from North Cotabato; she had a degree in education, but she opted to work as an OFW to help her family make ends meet.

Romilyn’s case one year before

When news broke out about Romilyn’s death, then Ambassador to Saudi Antonio Villamor met with Prince Mohammad bin Fahad bin Abdulaziz al Saud, Emir of the Eastern Province on September 29, 2010, to discuss the case. The latter reportedly assured the Philippine official that local authorities were investigating the case and that he himself will see to it that justice will be served.

The DFA for its part reported that it asked the Philippine Overseas Employment Administration (POEA) to suspend the license of the Philippine agency, PRA Solidworks Manpower Resources & Promotion, which recruited Romilyn. A report from the Philippine Overseas Labor Office-Eastern Region Operations (POLO-ERO) also said Romilyn was deployed by the agency to work as a a nursing aide, but Romilyn ended up being a household worker.

Months later, on February 16, the Philippine embassy in Saudi received copies of the investigation and forensic reports from the Saudi Ministry of Foreign Affairs. The embassy, however, did not disclose the reports’ contents.

Monterona said he was told by a source inside the embassy that the investigation and forensic reports concluded that Romilyn committed suicide.

“We completely refuse to believe this because this conclusion totally contradicts the medical report s issued by the hospital’s physicians who attended to Romilyn after she was found. It’s impossible for Romilyn to have both stabbed herself and drank acid,” he said.

By March, there were still no developments in Romilyn’s case. Romilyn’s family decided to withdraw its case for re-investigation into what they believed was the victim’s murder and appealed that Romilyn’s body be sent home.

After discovering that Romilyn’s body was mutilated, Romilyn’s family, with the help of Migrante-Middle East have already begun efforts to prompt the embassy in Saudi Arabia to formally request for a re-investigation and hire the legal services of a local Shariah lawyer.

“I hate to say this: Romilyn’s case won’t be the last unless the Philippine government exert more efforts to protect the welfare of OFWs,” he said.

Immediately after Romilyn’s case came out, Migrante-Middle East circulated a petition calling for justice for OFWs killed under mysterious circumstances or are victims of rape and violence. The following are some of the case the chapter has documented and continues to monitor:

2. Joy Cabansi Sarto, 28, from Echague, Isabela province. She was murdered by her Arab employer on Sept.22, 2009. The case remains unresolved;

3. Lorena (not her real name), 33, from Ilagan, Isabela. She was raped and the crime took place in in Dammam, Saudi Arabia on October 1, 2009. The case remains unresolved;

4. Eugenia Baja, 24, initial reports indicated she committed suicide, but based on the autopsy report her body bore stab wounds and bruises; The case remains unsolved;

5. OFW Clara, then in her mid-20s, from Lagawe, Ifugao. She was gang raped by Arabs in her employer’s house sometime in Feb.2007. The case remains unresolved.

7. OFW Marilou Macam Ating, 37, from Lingayen, Pangasinan. Sketchy reports that reached her family indicated that she died after falling from the fourth floor of her employer’s residence. Family believed there was foul play involved when she was killed on November 24, 2008. The case remains unsolved.

“These cases are only a handful of the many shocking cases proving how OFWs are highly vulnerable to abuse and even murder. That these cases remain unresolved exposes the extent of government neglect: it remains largely hesitant and and reluctant to pursue charges on behalf of OFWs. Again and again we demand that the issue of OFW protection must be raised with host governments as issue of concern and diplomacy,” he said.

Finally, Monterona said it is partially good that the Saudi government itself imposed a ban on the hiring of OFWs as domestic helpers.

“But it has to be said that this decision has nothing to do with the Saudi authorities recognizing the rights, welfare and protection of our OFWs. The ban has more do with the insistence of the Philippine government that Saudi employers strictly abide by the agreement that OFWs working as domestic helpers be given a minimum of $400 monthly as salary,” he said.

Monterona also said the Benigno Aquino III administration has again failed to uphold the interest of OFWs when it did not file a diplomatic protest on the maltreatment of OFWs by their employers in Saudi Arabia. Romilyn was murdered and her case is by no means closed because justice has not been served and her murderers remain unpunished. She did not die by her own hand — she was killed willfully and brutally,” he said.