“We are continuously receiving complaints from OFWs whose relatives were victimized by an extortion gang in the NAIA. These extortionists demand to be shown the AOS, but afterwards went on to ask for money.” – Migrante

MANILA — Instead of being a measure to prevent human trafficking, the Department of Foreign Affairs’ “Affidavit of Support” (AOS) requirement is becoming an instrument of corruption.

Since July 12, 2010, OFWs securing an affidavit of support for their relatives from the Philippine consulate are required to be present even if they filed their visit visa at the UAE Immigration through travel agencies. They are also required to have their affidavit of support in red ribbon. The document has to be notarized at the Philippine Consulate General in Dubai and it costs around P1,000 (US$23.25).

Last year, Migrante-UAE initiated public discussions among Filipino groups in Dubai as part of its campaign to oppose the AOS requirement. In the next few weeks, the group will engage in a petition signing campaign, the results of which it will present to the Philippine consulate in Dubai. It also intends to send copies to Malacañang and the House of Representatives.

According to the DFA, the AOS aims to put an end to human trafficking and illegal deployment of OFWS through unscrupulous recruitment agencies. Nhel Morona, Migrante-UAE Secretary-general said the AOS requirement was “nothing but a form of legalized ‘kotong’ or mulcting.

“It’s a useless document. It won’t stop human traffickers from their illegal activities, but it will breed extortion activities,” he said.

Morona cited reports his group received sometime on May 2011 about a group of passengers who boarded a flight from Manila to Dubai with a stopover in Hong Kong . They were supposedly asked to pay grease money by immigration officials at the Ninoy Aquino International Airport (NAIA) when they discovered that the passengers were all on a visitor’s visa. He also said there was a Filipina nurse who was forced to hand out P25,000 (US$581) allegedly to agents of the Bureau of Immigration (BI) in NAIA so she would be allowed to fly back to Dubai on a visitor’s visa.

In the meantime, a recent report from the Dubai-based Gulf news revealed that an OFW engineer bound to Dubai was also forced to provide P28,000 (roughly equivalent to 2,435 dirhams or US$651) just to be allowed to get on his flight. The engineer reportedly presented an AOS executed by his cousin, which was signed by a Philippine consul in Dubai, but he was still accosted by Philippine airport officials.

“We are continuously receiving complaints from OFWs whose relatives were victimized by an extortion gang in the NAIA. These extortionists demand to be shown the AOS, but afterwards went on to ask for money,” he said. 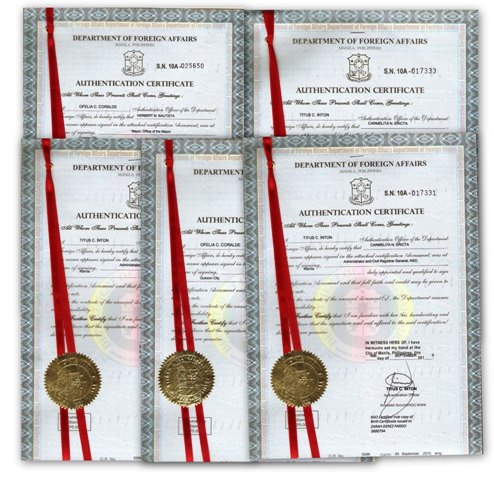 These papers are costing OFWs a lot of money.(Photo by Ina Alleco R. Silverio / bulatlat.com)

This is not the first time that the AOS elicited strong criticism and protests from OFWs. In December last year, the Philippine Embassy in Kuala Lumpur received several calls from Filipino travelers and “sponsors” who complained that the AOS they issued were not honored by Philippine immigration officers, causing them to be off-loaded from their respective flights.

The DFA released a statement saying that immigration officials “do not necessarily require authenticated affidavit of support and/or guarantee. But many Filipino travelers resort to this when they cannot show that they could shoulder the cost of the trip either through their personal capacity or through their sponsor.”

“Nonetheless, having an authenticated affidavit of support does not guarantee being cleared for departure. The affidavit of support still has to be read and assessed by the immigration officer as authentication only guarantees due execution by the affiant and does not guarantee its contents,” the DFA said. Such measures are in compliance with Republic Act (RA) 9208, or the Anti-Trafficking in Persons Act of 2003, it went on.

The DFA has previously explained that the law mandates the Bureau of Immigration (BI) with strict enforcement duties pertaining to the immigration departure formalities of OFWs , the Filipino fiancés/fiancées and spouses of foreign nationals.

The BI supposedly has the right to regulate travel at the Philippine international airports and seaports should BI officers and personnel reasonably detect a trafficking situation. Immigration officials are reportedly backed by RA 9208 and/or other relevant laws including the Revised Penal Code, RA 8042 or the Migrant Workers and Overseas Filipinos Act of 1995, and RA 8239 or the Philippine Passport Act.

Migrante-Middle East regional coordinator John Leonard Monterona for his part said they are already looking into the legal implications of the AOS requirement.

“It violates one’s freedom to travel as guaranteed by the Constitution, the Bill of Rights. Unless the authorities can prove that the AOS is genuinely a measure that furthers concerns regarding public safety, public health or national security, the AOS should be scrapped,” he pointed out.

He also said the AOS is not even required by the newly amended Migrant Workers and Overseas Filipinos Act or Republic Act No.10022.

According to reports, household workers bound for the Middle East spend about P5,800 to P11,300 ($134 to $262) each for medical certification, household worker assessment fee and other related fees such as those for clearance from the National Bureau of Investigations and passport, excluding transportation and food.
In the meantime, OFWs bound for Hong Kong, Taiwan, Brunei, South Korea, Malaysia and Singapore also shoulder compulsory insurance premiums and placement costs, which range from P50,000 to P150,000 ($1,162 to $3,488). With most OFWs on two year contracts, the upfront cost of the compulsory insurance is between P6,500 to P8,800 ($151 to $204).

The Philippine Overseas Employment Agency said employers or recruiters are required to secure a two-year policy coverage for OFWs amounting to a fixed rate of US$144, on top of the premiums. The policy includes benefits of US$15,000 in case of accidental death; US$10,000 in case of natural death; and US$7,500 in case of permanent disablement, including repatriation costs, subsistence allowance benefit, money claims, compassionate visit, medical evacuation and medical repatriation.

The DFA said these costs should not be passed on to OFWs, but in reality, it’s the OFWs who pays for them.
“OFWs are already paying so many fees imposed by the government, but get so little in turn in terms of services. This AOS is another financial imposition on OFWs and it should be done away with,” said Monterona.
Scrap AOS requirement in Macau

Filipino organizations in Macau have been up in arms since the Philippine consulate and the immigration authorities re-imposed the AOS requirement in June 2010.

According to Migrante-Macau coordinator Catalina Yamat, the AOS requirement in Macau has been repeatedly scrapped and reinstated in 2003, 2006, 2009 and 2010. She made the observation that the AOS was reinstated always one year before an election is scheduled to take place.