Workers ask for emergency assistance from SSS, to no avail

MANILA – Felisando Repaso, 53, was hoping he could get some financial assistance from the Social Security System (SSS). His house in Cupang village in Antipolo, Rizal was shattered by the strong winds of typhoon “Pedring.”

A jeepney driver, Repaso admitted he has stopped his contributions to the SSS, saying that what he earns is not even enough to feed his wife and four children.

“We need emergency funds, not loans. Loans would not help us at all,” Repaso told Bulatlat.com in an interview.

Repaso, along with fellow workers under the banner of Kilusang Mayo Uno and members of Anakpawis partylist picketed the main office of the SSS in Quezon City this morning. They called on the agency to grant emergency cash assistance, not loans, to members who are victims of typhoons “Pedring” and “Quiel.”?

“What workers and SSS members need right now is genuine assistance, not an additional debt burden. This is far from mendicancy, since SSS funds come from the contribution of its working members,” Roger Soluta, KMU secretary general, said.

Leaders of KMU and Anakpawis intended to send a letter to SSS president and chief executive officer Emilio de Quiros Jr. but they were told that the latter is out of the country on official business. 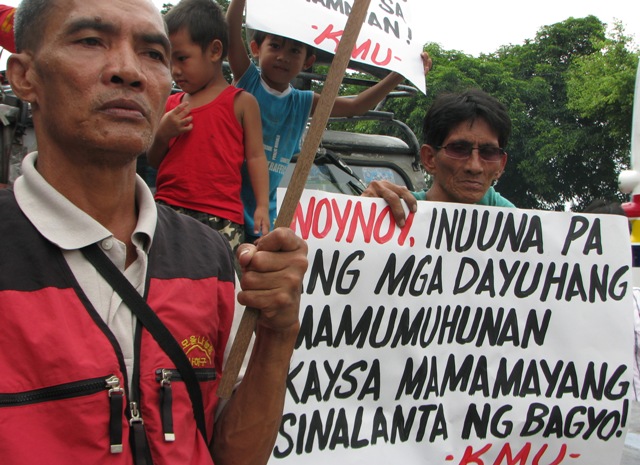 Felisando Repaso’s (extreme left) hopes have been shattered after officials of the Social Security System told him and his fellow workers that the agency could not provide cash assistance to its members (Photo by Ronalyn V. Olea / bulatlat.com)

SSS officials said the agency has no sufficient funds to provide assistance to all its members who are victims of calamities.

In a dialogue with the workers, Marisu Bugante, SSS vice president for public affairs and special events, said the agency has no scheme to provide cash assistance for its members.

Bugante said workers can opt to avail of the salary loan and housing loan for repair and improvements.

Bugante said the maximum amount of salary loan a member could avail of is P24,000 ($549.64). It has a ten percent interest. The housing loan for repair and improvements, meanwhile, has a maximum amount of P300,000 ($6,870) with interest ranging from nine percent to 13 percent.

“If they are qualified, they can avail of these loans,” Bugante told the workers.

Soluta asked if the SSS could write off the interest in loans. “SSS members would be further buried in debt. It will take a long time before they could pay for these loans,” he said.

Cherry Clemente, Anakpawis secretary general, told the SSS officials that the “extraordinary situation should prompt the agency to extend concrete assistance to its members.” 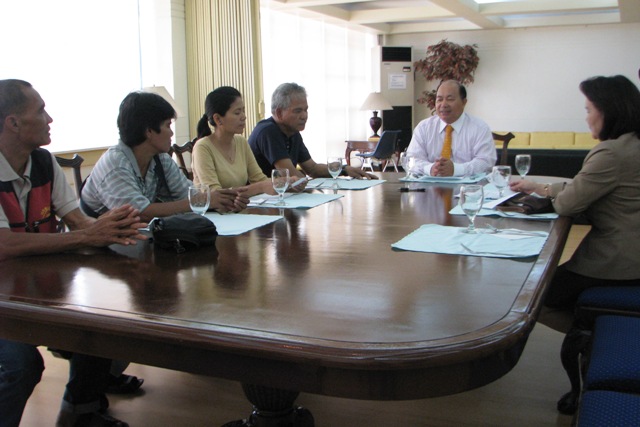 Edgardo Solilapsi, SSS executive vice president, said the agency’s average annual collection of P80 billion ($1.83 billion) is just enough to cover the benefits of members such as pension, disability, maternity and sick leaves. Solilapsi reasoned out that without the investment income outside of the collections, the SSS would not be able to cover operating expenses.

Ma. Luz Generoso of the SSS Loans Program Division said they are also studying the possibility of implementing a moratorium on payment of loans.

Bugante said the agency is still contemplating the allocation of P50 million ($1.14 million) for calamity assistance in the form of relief and/or rescue operations and medical missions.

Bugante said the agency did the same after the typhoon “Ondoy” in 2009. She said they spent P2 million for more than a thousand families in Taguig City. Based on this figure, the P50 million proposed allocation for calamity assistance could only cover around 25,000 families.

“We are still studying if we will course it through other government agencies such as the DSWD or local government units,” Bugante said, adding it would be more cost-efficient.

The SSS official admitted though it is not enough. “With such a little amount, how many thousands could benefit?” she said.

Soluta commented that the victims of typhoons could hardly feel any assistance from government. To which, Solilapsi replied, “The government has a huge responsibility but with little funds.”

Clemente said the government has set the wrong priorities, with the biggest allocation given to debt servicing.

Meanwhile, Repaso, the driver, who joined the dialogue, was gently told he is not qualified to apply for a loan because he did not remit his contributions for eight years. He went home empty-handed.

Clemente said SSS officials are just administrators of workers’ funds. She said workers must benefit from their own funds.