TRENTO, Agusan Del Sur — Her voice rising above the soft hum of radio songs, Amelia Dano could not hide her restlessness. Sitting at the front of a four-wheel drive vehicle, Amelia waited in trepidation as the ten vehicle convoy finally crossed Monkayo town, the last municipality in Compostela Valley province.

One fine Sunday morning, the fleet of families, media and peace advocates entered the province of Agusan del Sur, through the rough road traversing the palm oil plantation and roads littered with logging workers. At the first stop, Amelia reached for her make-up, looked at the mirror and retouched a faintly gaunt face, borne out of weeks of sleepless nights. Soon, her husband, Henry Dano, mayor of Lingig town, Surigao del Sur will be released by the New People’s Army (NPA).

All throughout the trip, Cristina Desamparado and Sherlmalyn Saban who were sitting at the backseat, kept their silence. They too were excited. Their husbands — Corporal Alrey Desamparado and Private First Class Alan Saban — who are the military escorts of Mayor Dano, will also be released — just days after the NPA announced death sentence for the two as “maximum punishment for blood debts and espionage.”

For these three women, second chance is at hand.

Hours later, a visibly happy Mayor Dano, wearing a white camisa de chino, a pair of black jogging pants and slippers, said of the day of his release, October 9 as another birthday celebration. He celebrated his birthday at the forests with the NPA last September 6.

Dano was arrested by the NPA on August 6 right at his home and his release means another chance for him to continue serving the people of Lingig as its first-time mayor.

“I thank my custodian for showing me the true Filipino spirit for the 64 days that we were together,” Mayor Dano said. “If I’m not mistaken, we transferred from 13 different stations, and there I saw the truthfulness of the group. There I saw the true spirit of camaraderie,” he added. 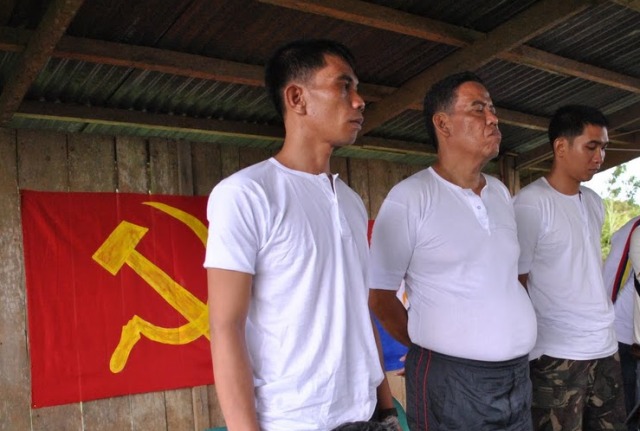 Dano said he and his two military escorts were taken cared of by the NPA. Health check-ups were conducted daily; anti-hypertensive medicines were available should his blood pressure shoot up. In the forest, they were served three full meals a day. Tents were also provided so that they will not be wet from rain and hammocks were given so they can sleep well.

Within the entire duration of his custody, Dano learned a lesson. “That man does not live only for himself but lives for the benefit of others; to sacrifice oneself not only for the family or brothers and sisters, but for the majority.”

While he is happy that he’ll be reunited with his family, the mayor said he is also sad because he will be separated from his custodians.

Dano was turned over by his custodial unit, the NPA’s Conrado Heredia Command, to the independent humanitarian mission, Sowing the Seeds for Peace, a Mindanao movement for a just and lasting peace. Part of his receiving party is Surigao del Sur Governor Johnny Pimentel.

“I thank the CPP-NPA-NDF for the safe release of Mayor Dano,” Pimentel said.

He adds: “It marks another beginning for them. Mayor Dano has been out of the province for 64 days and I know that his constituents in the municipality of Lingig are missing his services.”

Bishop Modesto Villasanta of the Sowing the Seeds for Peace said they are pleased with the NDFP’s political decision to release Dano and for the suspension of the military court proceedings against Desamparado and Saban. “We appreciate the granting of freedom to the NPA detainees in response to our humanitarian appeals,” he said. 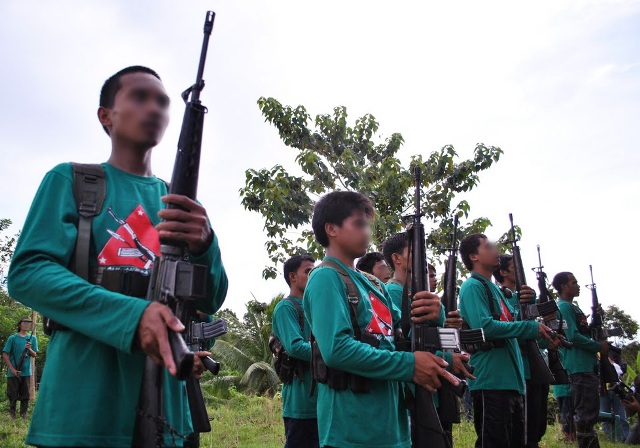 Communist guerillas under the Conrado Heredia Command formally starts the program for the release of the three NPA detainees by singing the Internationale. (davaotoday.com photo by Medel Hernani)

Dano said after his release, he will continue his work as mayor and would inhibit himself from doing activities with the military.

Trial in the revolutionary government

According to Rubi del Mundo, NDFP-Southern Mindanaospokesman, Dano’s PAG, under the 75th Infantry Battalion of the 4th Infantry Division, also functions as a security unit for his mining-related enterprises in Palo Alto village and other areas in Lingig. His PAG, said Del Mundo, harassed peasants and Lumads who opposed the entry of large-scale mining operations in the area. Del Mundo said that on October 10 last year, armed men of the mayor murdered Eduardo Toyogon, a member of a progressive peasant association and also a purok leader of one of the sub-villages in Mahayahay village in Lingig.

“That’s why I apologized to the NPA and to the people’s court who was trying my case,” Dano said, referring to an audio message which the NDF sent to media outlets September 26. Dano owed up to collaborating with the Armed Forces of the Philippines and asked for an opportunity to rectify his errors and change for the benefit of the masses.

Four days later, the Communist Party of the Philippines’s (CPP) Southern Mindanao Party Regional Committee (SMPRC) said it made “a political decision to suspend the judicial proceedings against the municipal mayor as an affirmative response to his issuance of an apology.”

Ka Mel Rivera, SMPRC’s public information officer, said its decision is also for “humanitarian consideration to the appeals made by his family and the representations made by well-meaning groups and individuals.”

“I’m very thankful that they heard my apology and now I’m given temporary freedom to continue my function and to correct the violations that I made,” Dano said.

NDF’s Del Mundo said Dano’s case is conditionally archived to give way to his release. “But in the event that he willfully commits an act or acts that constitute as violation of human rights, international humanitarian law and the laws and policies of the people’s government, he shall be rearrested and put to trial,” said Del Mundo in a statement read by the NPA custodial unit during Dano’s release.

The NDFP-Southern Mindanao said Dano was neither a prisoner of war (POW) nor a kidnap victim. “He is a civilian who was charged in the people’s court, disarmed and arrested by the NPA, and detained to face the bar of revolutionary justice,” Del Mundo said.

In the hills, on October 2, at about 5 p.m., Desamparado and Saban were read the decision of the NPA’s military tribunal. They were sentenced to capital punishment of death for “blood debts and espionage” while operating as intelligence officers under the Philippine Army’s 75th and 36th Infantry Battalions.

According to Rigoberto F. Sanchez, spokesman of the NPA’s Merardo Arce Command Southern Mindanao Regional Operations Command, “(D)ocumentary evidence, investigation results and their own admission have established without any doubt that they are spies.” He added that Desamparado and Saban do not qualify as prisoners of war under the strict application of Article 46, Section 2, Part III of the Geneva Convention of 1948’s Protocol I.

The NPA said Desamparado and Saban were guilty of killing an NPA cadre under Guerilla Front 6 in Bukidnon where they operated as intelligence officers. Their intelligence operations in Lingig, while covering as “military escorts” of Dano, resulted in the arrest of Ka Enchang and two other NPA hors de combat in June. Before their capture, Desamparado and Saban were at the forefront of intense intelligence operations of the 4th Infantry Division targeting specific NPA officers and CPP cadres of Guerilla Front 20 in Southern Mindanao and in Guerilla Front 14 in Northeastern Mindanao.

“Under the prevailing conditions of civil war, the NPA as a party to the armed conflict, stands on justifiable grounds in applying its own military court proceedings against these captured enemy spies in accordance with the Rules on the Investigation and Prosecution of Suspected Enemy Spies of the People’s Democratic Government,” said Sanchez. Saban was a part of the signal intelligence whose expertise includes cellphone tracking. He and Desamparado are both members of the 75th IB intelligence unit.

After hearing his sentence, Desamparado said he did not know what to do then. “Part of me wants to escape while another part wants to grab a rifle from an NPA and shoot him and anybody else. But I managed to hold myself,” he said.

Practically raised in a military camp of his soldier-father, Desamparado grew up believing that NPAs are butchers who kill without a cause. But more than two months under NPA custody and experiencing firsthand the process of trial in the underground movement, his beliefs since childhood were proven wrong. “We were given a pre-trial. In the absence of our lawyers, the NPAs stood as our lawyers,” he said. “NPAs do not kill without a reason. They are not doing things for their own interest but for the interest of the majority,” he added.

On October 6, the NPA granted them conditional release. Sanchez said they did this as an act of humanitarianism. The NPA accorded Desamparado and Saban the status as POW and suspended the military court proceedings against the two.

“The NPA is indeed humane,” said Desamparado. “I owe them a big debt,” he added.

“I thank the NPA for giving us another chance to live,” Saban said. He extends his gratefulness to those he said, who helped them, the “revolutionary government of the people, the NPA and the masses.”

In granting the conditional release, Sanchez said they considered the “voluntary admission and apology” made by Desamparado and Saban that includes the “appeal for a chance to cease their participation in the armed counterrevolutionary operations of the fascist AFP, make amends for their crimes against the people and the revolutionary movement and revert to civilian status.”

The military dismissed the apology as “scripted” and “made under duress.”

When asked about their plans after their release, both Desamparado and Saban said it depends on the decision of the AFP’s court martial though they have been expecting that they will be discharged.

And once they will be discharged from service, “(T)hen I will just live peacefully,” Desamparado said.

“I will find work, anything, just to live,” Saban said.

Desamparado and Saban were turned over by the NPA to the International Committee of the Red Cross (ICRC). While they were made to sign the NDF’s order of release, no papers were handed over to Dano, whom the NDF said was not considered a prisoner of war.

“After weeks of traveling from Davao to Surigao, finally we’re together,” Cristina Desamparado said.

The Desamparados live in General Santos. Since her husband was under the custody of the NPA, she had been traveling from General Santos to Davao and Surigao to follow up the release of her husband. A day before the release, October 8, she and her two children, aged seven and two, went to Davao City from Surigao to prepare for their long-awaited reunion.

The plan was for the Desampados and Sabans to go with Dano’s family in Davao City where their families are waiting. They opted to stay for a day before reporting to their headquarters. But sadly, it did not happen that day.

Men in plainclothes waiting at Monkayo town took Desamparado and Saban and headed directly to the military headquarters in Bislig, Surigao del Sur. The appeals of Governor Pimentel, the wives and peace advocates, fell on deaf ears.

For Amelia, now reunited with her husband-mayor, “I’m very happy, I can’t explain it.” (davaotoday.com/bulatlat.com)