Last week President Obama broke his campaign commitment and put three free trade agreements up for a vote in Congress. Business interests, ecstatic at the prospect, promise they’ll bring us jobs. Experience tells us, however, their promises are worthless.

Nineteen years ago, when the North American Free Trade Agreement (NAFTA) was in Congress, supporters said it too would create jobs and protect labor rights. Before agreeing to new free trade treaties with Colombia, South Korea and Panama, Congress should look at the dismal record.

Promise #1. A typical pro-business study predicted in 1992 that NAFTA would create 130,000 U.S. jobs in two years, double U.S. exports to Mexico, and create 609,000 jobs there. Today Tom Donahue, CEO of the U.S. Chamber of Commerce, repeats the promise, saying the three new treaties also “are about creating jobs.”

According to the Economic Policy Institute, however, between 1993 and 2004 the U.S. trade deficit with Mexico ballooned by $107 billion, which cost 1,015,290 U.S. jobs, 123,000 in California. But although those jobs went south, Mexico lost far more jobs because of the treaty than those relocated from the U.S. 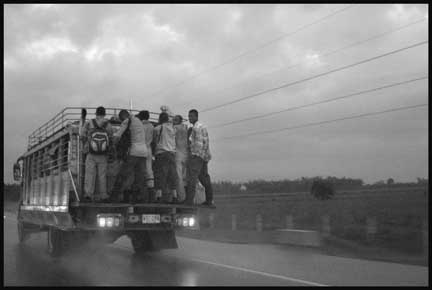 Displaced Colombian farmers on the road looking for work in the sugar cane fields of Cauca. A Free Trade Agreement will increase the number of farmers displaced by grain and agricultural dumping from the U.S. .

Six million people from Mexico came to live and work in the U.S. as a result of this displacement. The Colombian FTA has a provision identical to that in NAFTA, which led to the corn dumping, so those farmers will be uprooted too.

Enrique Athankasiadis, President of Panama’s National Agricultural Organization, says, “We are certain that the FTA will cause great displacement in the Panamanian agriculture sector, on which 40 percent of our nation’spopulation depends. We Panamanians do not want to follow the Mexicans and Central Americans in the flood of immigration to the United States, where many risk their life trying to be able to make a living, Forced displacement and immigration describes Mexico’s experience under NAFTA, which is almost identical to the U.S.-Panama FTA.”

Obama’s FTA with Korea will cost 159,000 U.S. jobs in seven years, according to EPI, especially in electronics in the south Bay. In the last decade alone we’ve lost 6 million high-wage manufacturing jobs. 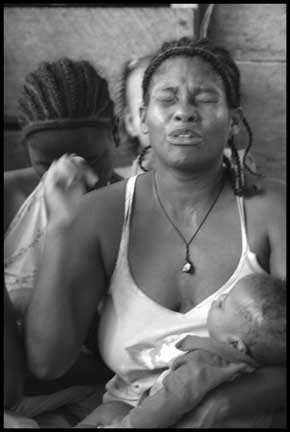 The widow of a rural land rights activist weeps in recounting his assassination by a rightwing paramilitary organization linked to the Colombian government.Land reform advocates fear the Colombian Free Trade Agreement will lead to the displacement of farmers by the dumping of agricultural products from the U.S., and the seizure of their land.

Promise #2. Supporters promised a NAFTA labor side-agreement would protect the right to join unions and raise wages in Mexico.

Just in the past two years, the Mexican government fired 44,000 electrical workers to destroy their union, and helped a giant mining company break a 4-year strike. NAFTA did nothing to prevent these or other violations of labor rights. Mexican wages have declined since the treaty took effect, producing more unemployed workers, more displacement and more forced migration.

This will be the story in Colombia too, where over 2850 trade unionists have been murdered in the last 25 years. Just three weeks ago, Isidro Rivera Barrera, an activist in the Colombian oil workers union, was repairing a washing machine in front of his home in Barrancabermeja when a gunman jumped off the back of a motorcycle and shot him three times at point-blank range. The assassination followed a demonstration in which contract oil workers blocked roads and cut production in Puerto Gaitan for three days, while their Canadian employer accused them of being “armed criminals.”

Colombian unions call the toothless side agreement proposed to protect their labor rights a fig leaf solely “intended to ensure ratification.” Union leaders in South Korea have also been arrested repeatedly and imprisoned. But there are no protections proposed at all for workers in South Korea or Panama. 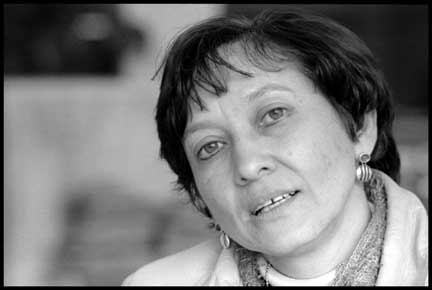 Ligia Alzate, a high school principal in Medellin, Colombia, is an official of the teachers’ union and a vocal opponent of the Colombian Free Trade Agreement.

Higher profits and a “competitive edge” don’t ensure companies will keep jobs here. EPI’s founder Jeff Faux says, “As companies become multinational, whether they produce in America is irrelevant to their investors and top managers … Rather, these agreements provide global corporations with the opportunity to outsource production for the U.S. market.”

Workers and unions in the U.S., Colombia and South Korea all agree. The AFL-CIO’s Rich Trumka says, “We need to be creating jobs-not passing agreements that will offshore more jobs.”
“We do not need a NAFTA-style FTA,” adds the Korean unions, calling it “harmful not only for the Korean workers and working families, but for the workers and working families in the U.S. as well.” Colombian unions “call on the U.S. Congress not to approve the agreement.”

Congress should listen. Free trade treaties that throw more workers on the street, undermine labor rights and lead to forced migration, are political suicide for Democrats especially. Democratic candidates will need and look for workers’ votes next year. Regardless of promises about a stimulus or a new jobs bill, working families will not forget how they voted on these job-killing treaties.