Sidebar: An ‘ordinary man’ who lived an extraordinary life

West Batangas—The New People’s Army (NPA) in Batangas offered a “gun salute” to the memory of the late Gregorio ‘Ka Roger’ Rosal at noontime of October 15.

This is in accordance with a Communist Party of the Philippines (CPP) directive issued last October 9 to the NPA that all its formations nationwide honor the communist movement’s national spokesperson.

Scrambling to outmaneuver government soldiers alerted by a public announcement of the event, a platoon of revolutionaries under NPA-Batangas walked for five nights to look for a safe place to hold a short program.

“They have launched forays into our territories while the Philippine National Police maintained a checkpoint between the Batangas and Cavite boundaries,” he said in Filipino.

After securing the place the NPA guerillas spent most of the morning practicing songs and the gun drills while civilian supporters started bringing in food and drinks.

Finally, at about 10 o’clock in the morning, the revolutionaries started a simple program that featured speeches from various underground sectoral organizations allied under the National Democratic Front of the Philippines (NDFP). 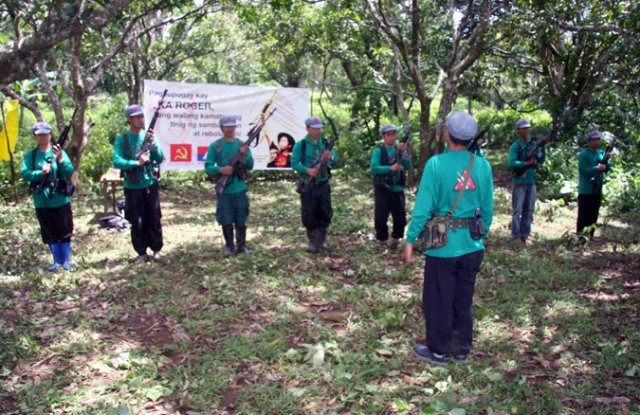 The squad executed the customary gun drills for such an occasion without actually firing their rifles and grenade launchers.

“We are literally surrounded by the enemy and we are very near major highways. We cannot compromise the safety of the masses here present, those living in this area and our media guests by firing our guns,” Mabini explained.

“We are happy we held this program as best we could under our circumstances in honor of the great Batangas native, Ka Roger. He was among those who founded the NPA in this province, aside from being one of earliest members of Kabataang Makabayan (KM, Patriotic Youth), and the re-established CPP in Batangas,” he added.

Rosal was born on April 19, 1947 in Ibaan, Batangas to landless peasant parents. He was a working student—a landowner’s help and a huckster who sold mosquito nets around the province.

His family’s poverty is said to have exposed the young Rosal to the social inequities, which he vowed to fight against by joining the Kabataang Gabay ng Bayan (KGB), a local nationalist youth organization.

Along with Kabataang Gabay ng Bayan comrades, he agreed to transform it into a KM chapter. He joined the CPP shortly after.

Leading a rally against the Batangas Sugar Central in 1973, Rosal was arrested and jailed at Camp Vicente Lim in Laguna.

He escaped with other political detainees in a jailbreak within the year that was dubbed by activists at the time as “The Great Escape of the Papillion Squad” (after the great French escapist Papillion).

Working full time in the underground after his escape Rosal was tasked to establish NPA fronts in Southern Tagalog and Bicol provinces throughout the rest of the 70s and 80s.

He was soon appointed to various leadership positions within the Party hierarchy in the region, including the spokesperson-ship of the NPA’s Melito Glor Command, the revolutionary army’s formation in Southern Tagalog.

As one of the leading Southern Tagalog cadres Rosal was severely criticized and disciplined for failing to stop “Oplan Missing Link,” an anti-infiltration campaign, which the CPP eventually criticized as a hysteria, that killed hundreds of revolutionaries.

He accepted the disciplinary action against him and was one of the CPP leaders who led the underground movement to self-criticize and seek forgiveness from the victims’ relatives.

In 1994 Rosal was appointed to the position he became most famous for—the CPP’s national spokesperson.

As a media savvy revolutionary spokesperson Rosal angered high government and military officials so much that a Philippine Army general commanded the abduction of one of his two daughters to make him surrender.

Rosal went to the media instead and the resulting public outcry forced the Corazon Aquino government to return the girl to the care of her grandmother.

The Philippine government offered millions of pesos as prize money to anyone to can contribute to Rosal’s arrest or death.

Rosal admitted to almost being captured by the military on several occasions, however. He was ordered by the CPP’s central committee in 2006 to cease using communication gadgets that could be triangulated. He was rarely heard from since.

The NPA in Rosal’s home province said they are proud that Rosal was never captured again.

“But we are most proud of his contributions to the national democratic movement the most. He is definitely one of our greatest heroes,” Ka Joel (Comrade Joel), a 20-year old red fighter, said.

“Thousands of youth and students like me are influenced by the shining examples of Ka Roger, especially those who, like him, came from humble backgrounds,” the former college student said.

Asked about his reaction to Government of the Philippines chief negotiator Alex Padilla’s comment that the youth are too preoccupied with Facebook, the popular social networking site, Ka Joel said, “Peasant youths like me have no money to spend on computers. We have very little; we only have the revolution to address the many social injustices in the Philippines.”

In its message to Party members, NPA fighters and supporters in the region, the regional committee of the CPP in Southern Tagalog said Rosal may have died but his great contributions to the communist revolution will forever be remembered.

“(It was) Ka Roger’s undying voice that fused the voice of the oppressed and exploited Filipino people into one great revolutionary force,” it said.

“…(W)e pay Ka Roger our highest tribute by transcending our grief into revolutionary fortitude and rally the broad masses of our people towards a resolute revolutionary until victory” it added.

The entire CPP said that Saturday’s nationwide gun salute to honor Rosal was its way of ushering him into its “Hall of Heroes”.

“Today, (the people) engrave Ka Roger’s name onto the granite wall, next to those of such great working class heroes as Andres Bonifacio, Macario Sakay, Crisanto Evangelista, Amado V. Hernandez, Felixberto Olalia, Crispin Beltran and many others,” a CPP statement said.