“Father Pops told us, Jesus Christ sacrificed his life for the people. What about us humans? Can’t we sacrifice our lives for our fellowmen and women, too?”

ARAKAN, North Cotabato — The coffin where the body of Fr. Fausto “Father Pops” Tentorio lay was bedecked with flowers. As the vigil continued day and night, so was the outpouring from ordinary folks who stayed for the daily mass and tribute. They paid respects to the missionary who spent much of his life serving the poor in Mindanao.

Father Pops’ scholars — from elementary to college – were also present. Most of them, if not all, stayed the whole duration of his wake. “Father Pops kept telling us, don’t base everything on the book and in the four corners of the classroom. You have to go outside and see actual events. The society—that is our book, our classroom,” recounted Rey Rabadon, 20, a resident of Barangay Malibatuan in Arakan.

And as 15,000 people – most of whom he helped and touched their lives — from Davao City, from the provinces, from Manila and Italy, witnessed his burial on October 25, Father Pops’ scholars promised to themselves, to continue and pursue the ideals and legacy of Father Pops. 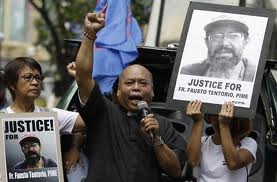 “Father’s death will not stop me from moving forward. It will not weaken me,” said Rabadon, “I know that with Father Pops’ help, there are people who are willing to help me and those who are interested to go to school.”

Rabadon, a Bisaya, is currently in his third year, taking Bachelor of Science in Forestry at the Cotabato Foundation College of Science and Technology. He has been Father Pops’ scholar since primary school. Two of his siblings were Father Pops’ scholars until they got married. One graduated high school while the other one finished only third year in secondary school.

Orphans since 2003, after both their parents drowned in the river after a heavy rain, Father Pops practically became their surrogate father.

“Father Pops took care of us. He supported us all throughout. And if he can’t go to us personally, he assigned his staff to deliver his support,” said Rabadon. “Everything that we need in school, he gave it to us since we became scholars until the time of his death,” he added.

For Isabel Indao, “(E)ven if he’s already gone, I promise to finish my education. He is my inspiration.”

Indao, 14, a resident of White Colaman in Kitaotao, Bukidnon is a Manobo. She’s one of Father Pops’ about 3,000 lumad (indigenous people) and peasant scholars from North Cotabato, Bukidnon and Davao del Norte. Currently, she’s a second year high school student of Notre Dame in Arakan. She’s been the missionary’s scholar since primary school.

“After secondary school, if he sees that you’re interested to pursue college, he will make you a scholar,” Indao said.

Indao is one of Father Pops’ special scholars who gets financial assistance and rice subsidy. Everything they need in school, including notebooks and uniforms, plus school fees and requirements are covered by Father Pops’ educational programs and scholarships.

Like Rabadon, Indao’s not the only missionary’s scholar in her family. “My older sibling was also a scholar but only until third year high school. She got married,” she said. “Father Pops saw that I was very interested to pursue and finish my studies. That’s why he made me his scholar,” she added.

To be an educator, is what she wants to be someday. “So that I can help my fellowmen and women gain knowledge,” she said.

“He will always tell us, don’t be absent if you don’t have any valid or big reason to do so,” she said.

Father Pops headed about 80 daycare centers in the areas of Arakan, Tulunan, Antipas, Makilala and M’lang, all in North Cotabato. Indao’s mother is a teacher in one of these daycare centers. Father Pops also supported 10 Ata-Manobo schools in Talaingod, Davao del Norte.

The missionary challenged his scholars to go out and see how people were exploited by the big land owners.

“Father Pops told us, Jesus Christ sacrificed his life for the people. What about us humans? Can’t we sacrifice our lives for our fellowmen and women, too?” he said.

“Now, with his death, I can tell that Father Pops’ words were true. Because he sacrificed his life, not only for the youth, but for the people,” he said.

“Father Pops wanted to see everybody have a decent life. He wanted every family to eat three times a day,” Indao said.

Indao said Father Pops has been going to their area when she was still in her mother’s womb. She grew up knowing Father Pops, the man who ignored the muddy earth and distance just to see the condition of her family and other lumad-peasant families.

“He kept visiting to check on our condition,” she said. “He really wanted to help the poor, especially the lumads,” she said.

Indao shared that Father Pops shouldered all the medical expenses, including medicines and hospital bills, when her older sibling got very sick.

“He had many contributions for our community, from the water facility to daycare center. Even before his death, he planned to put up a hanging bridge over the river in our sitio (sub-village), so it would be easier for the students to travel from their houses to school and vice versa,” she shared.