“It angers us that after 25 years, no one has been punished for the death of an important labor leader in the country’s history. Olalia is a victim of the injustice that he fought against in his entire life.” – KMU

Rolando, fondly called “Ka Lando” by his colleagues in the labor movement, and his driver Leonor Alay-ay were taken by armed men on the night of November 12, 1986 along Julia Vargas Avenue in Pasig. The next day, their bodies were found. Both of them were hogtied and their mouths stuffed with newspapers. Their bodies bore bruises and stab wounds all over, and both had gunshot wounds in the head.

At that time, Rolando Rico, 22, vowed to get justice for his father. He never thought that it might take a lifetime for the case to be resolved.

Until now, no one has been arrested for the crime. Suspects have yet to be arraigned. The trial has not even begun. “This is burdensome. It is very tiring already,” Rolando Rico, now himself a lawyer, told Bulatlat.com when asked about the case during the activity organized by Kilusang Mayo Uno (KMU) to commemorate Ka Lando’s 25th death anniversary, Nov. 13.

Rolando Rico, along with lawyers Romeo T. Capulong and Marie Yuviengco of the Public Interest Law Center (PILC), handles the murder charges against 13 suspects, all of whom were members of the Rebolusyonaryong Alyansang Makabansa (RAM), considered as right-wing elements of the Armed Forces of the Philippines (AFP).

Rolando Rico joined members of KMU and the National Federation of Labor Unions (Naflu) to the site where Ka Lando and Alay-ay were found, now called Olalia Road in sitio Olalia, barangay Dela Paz of this town.

Months after the incident, three suspects – Gilberto Galicia, Franco Espartero and Filomeno Maligaya – were charged in separate occasions but the cases were all dismissed for alleged lack of evidence. 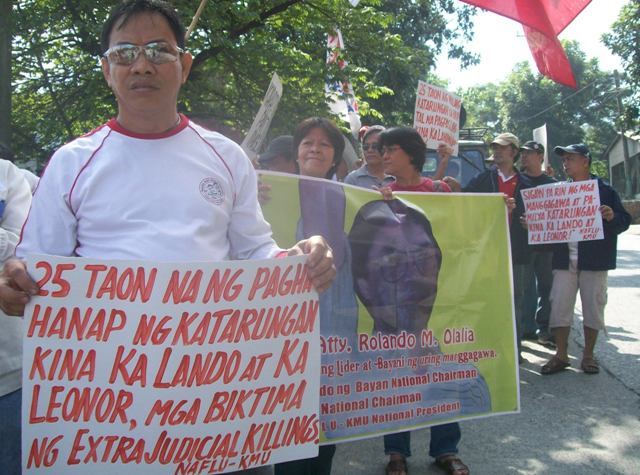 Many years later, eyewitness Medardo Baretto surfaced. Another witness Eduardo Bueno stepped forward. Their testimonies became the basis for the filing of murder charges against several RAM members on January 12, 1998.

The Department of Justice (DOJ) panel filed a criminal complaint on March 23, 1998 against the suspects. On August 31, 1998, the Regional Trial Court of Antipolo Branch 71 issued a warrant of arrest for the suspects but none has been apprehended up to now.

Two of the accused, Kapunan and Legaspi, filed separate motions to dismiss the charges against them. They argued that Proclamation No. 347 granted by President Fidel Ramos to rebel soldiers “extinguished their criminal liability.” Kapunan said political assassinations, such as the Olalia-Alay-ay double murder case, could have been part of simulated events intended to create an unstable situation favorable for a coup.
Kapunan and Legaspi’s defense of amnesty reached all the way to the Supreme Court. The high court issued a ruling on April 29, 2009, dismissing the petition of the two RAM members. 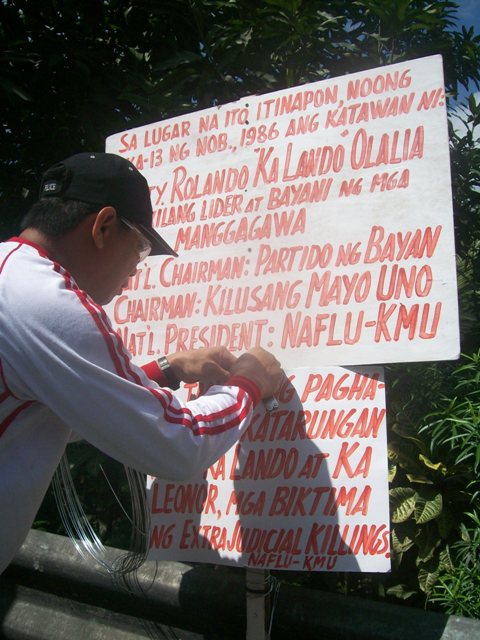 A worker puts up a marker on the site where the bodies of Rolando Olalia and Leonor Alay-ay were found 25 years ago.(Photo by Ronalyn V. Olea / bulatlat.com)

The high court said there was prima facie evidence against Kapunan and Legaspi.

“After 21 years, the Supreme Court ruling said that we can proceed with the case,” Rolando Rico said. “Two years ago, the defense filed a motion before the Antipolo RTC stating almost the same argument, that they are covered by the amnesty.”

“No one seems to want to handle the case,” Rolando Rico said. He said the judge who initially got the case inhibited himself. “It’ has been a year and the case has not been raffled.”

“It pains us that the masterminds behind the killings are in power,” said Antonio Pascual, Naflu secretary general, in a speech.

Barreto, one of the eyewitnesses, implicated Sen. Gregorio Honasan and Sen. Juan Ponce Enrile in the killing. Barreto said the killing of Ka Lando was part of a destabilization plot carried out by RAM against then President Corazon Aquino. Honasan and Enrile denied any involvement.

“There are circumstances to link these people with the murder,” Rolando Rico said. He said witnesses testified that the safehouse in Cubao and the resthouse in Batangas used by the perpetrators are owned by Enrile.

“It angers us that after 25 years, no one has been punished for the death of an important labor leader in the country’s history. Olalia is a victim of the injustice that he fought against in his entire life,” Roger Soluta, KMU secretary general, said.

Before leaving the site, workers put up a makeshift wooden marker. The old marker is already shattered.

“This is the kind of justice we have. We might need to wait for another 25 years,” Rolando Rico said.