“The eyes of the whole world are on the Philippines because of this crime and especially because until now, there is no justice and the killings, enforced disappearances and other human rights violations continue.” – Nestor Burgos, National Union of Journalists of the Philippines

The Ampatuan massacre claimed the lives of 57 individuals, including 32 journalists and media practitioners. One remains missing to this day. Suspects are members of the influential Ampatuan clan in Maguindanao. 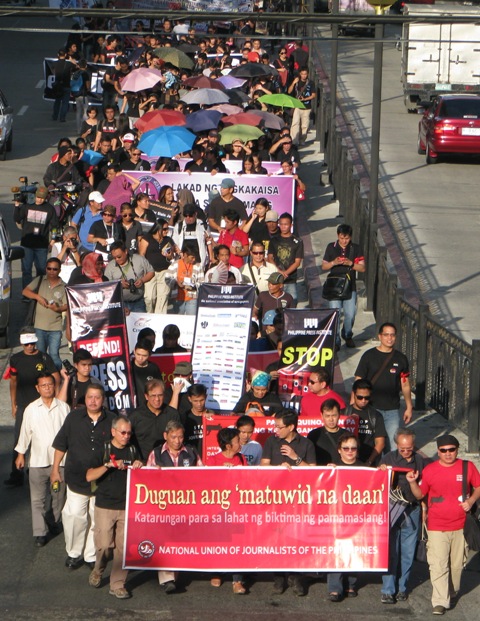 Wearing black, protesters converged in front of the University of Santo Tomas in España boulevard in Manila. They marched toward the Chino Roces (formerly Mendiola) bridge, stopping for a short program at the Nicanor Reyes street. Leaders carried a banner that read: “Duguan ang daang matuwid.” (Bloody is the righteous path) President Benigno S. Aquino III repeatedly used the phrase “daang matuwid” to refer to the path his administration is taking.

“The eyes of the whole world are on the Philippines because of this crime and especially because until now, there is no justice and the killings, enforced disappearances and other human rights violations continue,” Burgos said.

Along the way, media practitioners and journalism students made “a trail of impunity,” outlining human bodies on the asphalted road.

According to the Freedom Fund for Filipino Journalists (FFFJ), ten journalists have been killed since the Ampatuan massacre, six of whom were murdered under the new Aquino administration.

The FFFJ also said a number of community journalists have also been threatened, sued for libel on the flimsiest grounds, barred from attending interviews and press conferences, and physically assaulted. The group cited the recent burning of a Catholic Church-owned radio station in Occidental Mindoro. “All are indicative of a state of mind among those who want to silence the press that could, in the present circumstances, lead to murder,” the FFFJ said.

Meanwhile, the Alliance Against Impunity in Mindanao recorded 71 cases of extrajudicial killings since November 23 last year, noting that the number has surpassed human rights statistics in the first two years of the Arroyo government. Fifty-five have been killed under the Aquino administration, according to human rights group Karapatan.

“The journalists and media advocacy groups knew a year ago, and know it even more now, that unless the Massacre trial is credibly concluded, with the killers and masterminds convicted and sentenced to the prison terms they so richly deserve, not only will the killing of journalists and those of human rights workers, political activists, environmental advocates, judges, lawyers, students, farmers and workers continue; the killings will even escalate,” the Center for Media Freedom and Responsibility (CMFR) said.

After two years, only two of the principal suspects have so far been arraigned. Of the 196 suspects, more than a hundred remain at large. The trial is locked up in bail hearings, with 48 suspects filing petitions for bail.

“I have already forgiven them. But justice should prevail over the crimes they committed. I hope such brutal killing would not victimize others. I think if justice is not achieved and until they are convicted, they would do the same thing all over again,” Mrs. Edita Tiamzon, widow of UNTV driver Daniel Tiamzon, one of the victims, told Bulatlat.com in an earlier interview.

The CMFR said the Ampatuan massacre is “a test of the will and capacity of the Philippine State not only to assure the safety of its citizens, but also of its ability to provide them justice.”

In his speech during the rally, Luis Teodoro, CMFR deputy director and former dean of the University of the Philippines College of Mass Communications, said Aquino must realize that if the Ampatuan trial is not credibly concluded, the already weak Philippine state would further weaken.

The FFFJ said that judging from his inaction, “Aquino seems to be as unconcerned over the killing of journalists in the Philippines as his predecessor Mrs. Gloria Macapagal Arroyo.” 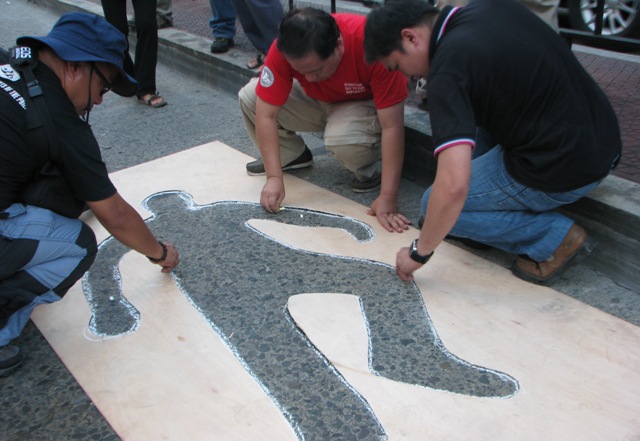 Journalists draw a trail of impunity during the second anniversary of the Ampatuan massacre.(Photo by Ronalyn V. Olea / bulatlat.com)

Citing a remark from an Assistant Secretary from the Presidential Communication Operations Office (PCOO) that “we (the government) can’t really put an end to impunity” during a round table discussion on the Ampatuan Massacre and the Culture of Impunity last November 14, the FFFJ asked, “Is it perhaps that self-fulfilling prophecy, which has already declared the administration’s surrender even before the battle has begun, that’s driving the Aquino administration’s inability and unwillingness to take the steps necessary to dismantle the culture of impunity so as to stop the killings that since 1986 have widowed and orphaned hundreds of Filipinos?”

The group revealed that except for increasing the budget of the Witness Protection Program, the Aquino administration has taken almost none of the steps agreed upon in the August 2010 meeting between media advocacy and journalists’ organizations and his communication group and the Department of Justice as necessary to stop the killings. Among these steps were Malacañang support for changes in the rules of court to speed up the judicial process, and the inclusion of media representatives in the formation of Quick Response Teams to immediately investigate killings of journalists and assure the preservation of evidence in the crime site.

In a statement, the UP-CMC noted that Aquino has rejected the dismantling of private armies. The academic institution said in some 100 other places in the country, warlords have also privatized government security forces.

In his speech, Jose Cabrera of the Integrated Bar of the Philippines (IBP) reiterated the call to disband private armies.

“The Aquino government has never learned from the Ampatuan massacre. It continues to promote paramilitary recruitment in communities and has not uprooted state-sponsored death squads. This shows that there is no daang matuwid, but rather a bloody trail of human rights violations,” Bishop Felixberto Calang, convenor of the Alliance Against Impunity in Mindanao, said.

“Mr. Aquino’s silence on the most recent incidents of journalists’ murders is equally unforgivable. And yet a statement from him each time a journalist is murdered declaring his impatience over the failure of the police to prevent it, and immediate police action in furtherance of the filing of the appropriate cases as a consequence, could help make would be killers hesitate by suggesting that things have changed and they could be prosecuted,” the UP-CMC said.

At the foot of the Chino Roces bridge, widows of the Ampatuan massacre victims led the lighting of candles. Journalists made a portion of the bridge “the scene of the crime.” Representatives of media outfits and organizations pledged to continue the struggle for press freedom. also filed separate civil cases against Arroyo for human rights violations.