“The deficient funds for health and education provide an alarming picture of how this national budget treats the people. The budget is unhealthy and ignorant in its utter disregard of these two basic social needs,” Palatino said.

In the approved 2012 national budget now awaiting the President’s signature for final approval, the health sector through the Department of Health (DoH) will get a budget of $979.96 million. The education sector, meanwhile, will receive $4.65 million under the Department of Education (DepEd) plus $506.13 million for State Universities and Colleges (SUCs).

“Granting that there are still added funds from other particulars like the Miscellaneous Personnel Benefits Funds (MPBF), Department of the Interior and Local Government (DILG) and the Commission on Higher Education (CHED), the budget for health and education will still be grossly insufficient to substantially address the needs of an estimated 94.01 million Filipinos most of whom are poor,” Palatino said.

Palatino revealed as follows the bloated and questionable budget items which he said should be slashed to augment the funds for health, education and other social services: 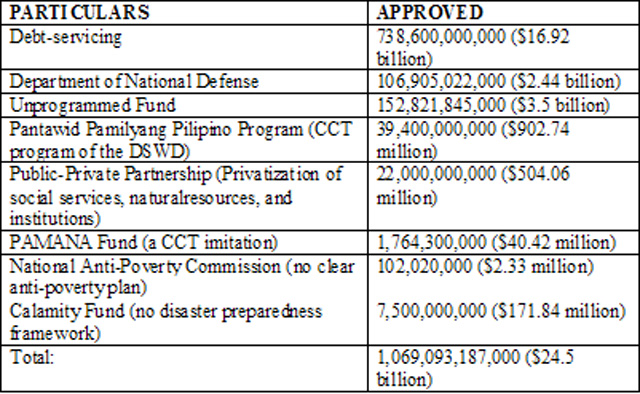 Palatino said that the much-needed increase of $1.15 billion for health, $549.89 million for SUCs and $2.65 million for basic education should be realigned from the total P24.49 million questionable budget items.

The youth solon added that the said proposed increases for education and health are part of the amendments that he, together with other lawmakers, have been pushing in Congress to make the national budget serve the fundamental needs of the people.

“There is also something deeply questionable about the budget process. Its approval is rushed to the detriment of rational and pro-people amendments that should have been enacted,” Palatino said.

As the final approval of the budget is in the hands of President Aquino, Palatino urged the President to enact crucial amendments to the budget and renounce the budget tradition of former President Gloria Macapagal-Arroyo which advocated government neglect of social services.

“President Aquino rode on the anti-Arroyo sentiment of the people with his promises of change. But it seems his administration is committing a terrible repetition of the budget tradition of the Arroyo regime. President Aquino must be warned that  government neglect of social services is a ‘Daang Matuwid’  that leads straight to the distrust and dissatisfaction of the people,” Palatino said.