You Are Here: Home → 2011 → December → 7 → Protesters vow to push through with occupy Mendiola protests despite being violently dispersed

“Mendiola is not only a street. That is why Chino Roces’s monument was built here because it is a symbol of the people’s struggle.” – Vencer Crisostomo, Anakbayan

MANILA – Youth, students, government employees and other sectors were violently prevented from setting foot on Chino Roces Bridge (former Mendiola Bridge) in what was planned to be Day One of Occupy Mendiola on Dec. 6, Tuesday. Different groups that support the camp-out condemned the violent dispersal.

After marching from España, the groups were blocked by the Manila Police at Claro M. Recto avenue. When the protesters attempted to go through the police barricade, the police used water cannons and truncheons to push them back.

“Why are you blocking us? We will just have our campout in Mendiola,” Vencer Crisostomo, national chairman of Anakbayan told the police. 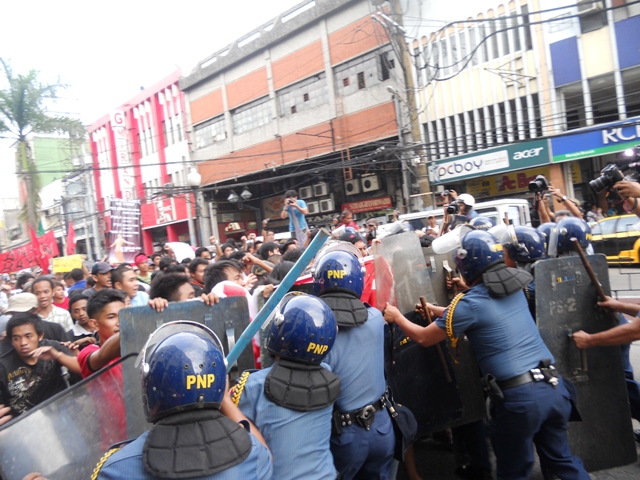 The Mendiola campout was supposedly inspired by the Arab Spring upheavals, strikes in Europe and the Occupy Movements in the US. The protesters lead by youth groups were supposed to stay at historic Mendiola Bridge up to International Human Rights Day on Dec. 10.

“It is time to send a message to those in power: We will no longer put up with lies, corruption, abuse, exploitation and injustice. Something has to be done. Let us stand up and make the statement that we want genuine change.” read the statement posted at the Camp Out website.

“Police should be arresting thieves. And the thief is in St. Lukes Hospital. You should be there arresting Arroyo and put her to jail and not here suppressing us,” Rommel Aguilar, PUP student regent, said. 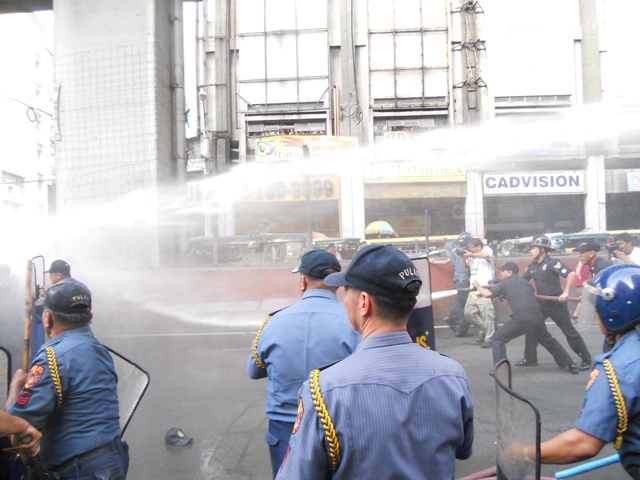 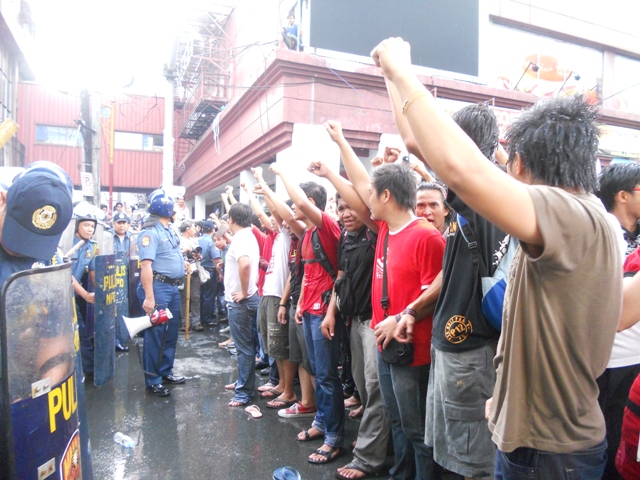 The groups still held their program at Recto avenue. They were given up to 5:30 p.m. by the police. But the groups did not abide. “They (police) are giving us until 5:30. Do we agree to that?” Crisostomo asked the protesters, who replied with a resounding no. The police tried to intimidate the protesters by preparing the water cannon and firing up the engine of the fire truck but it did not stop the protesters from continuing with their program.

“Mendiola is not only a street. That is why Chino Roces’s monument was built here because it is a symbol of the people’s struggle,” Crisostomo said addressing the police.

He added, “Today we are not only fighting for a higher budget on education, social services, health, for overseas Filipino workers (OFWs) and housing. We are here today to initiate change! Down with the rotten system!” Crisostomo shouted.

A unity of declaration signed by the different groups read, “We can no longer stand a twisted social set-up that robs the majority of our people of a decent life and basic social services. We can no longer stand a social system that produces immense wealth for foreign interests and for a few as the people, who toil all their lives, are increasingly pushed deeper into hunger, poverty and injustice. 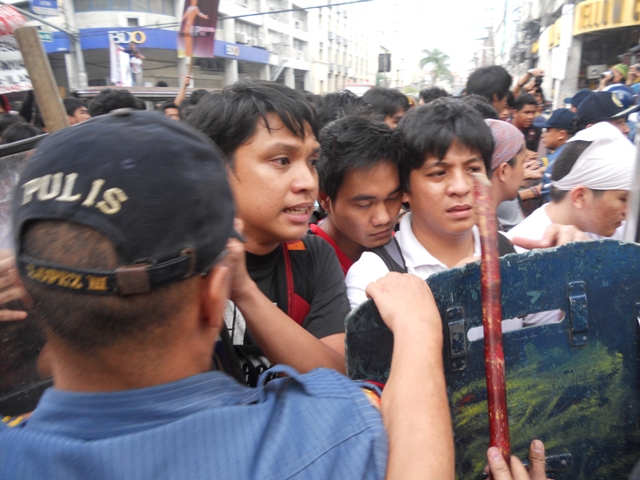 The groups also lambasted the government’s subservience to United States. Ivy Vanessa Demain, spokeswoman of Kilos na Laban sa Budget Cuts said the global financial crisis that hit US and Europe is passed on the people many times over. “If the US government utilized its resources to bail-out banks with billions of dollars, the Philippine government does the same being the former’s lapdog. The annual foreign debt servicing that eats up to 40 percent of our national budget is the lifejacket being hung on to by the US to save its drowning economy. This is an organized crime legitimized by whoever heads the state. Ever since the Marcos regime we have been bailing-out the US. They can’t survive without us.”

According to the Kabataan Rep. Raymond Palatino, the 2012 national budget allots meager funds for social services and has bloated questionable funds for debt-servicing, unprogrammed funds, military and band-aid programs. The progressive lawmaker who also joined the campout protests also urged the youth to take part in the series of actions calling for systemic change.

Palatino explained that in the 2012 national budget recently approved by the bicameral conference committee and now awaiting the signature of President Benigno S. Aquino III, Filipinos are being denied of their right to humane living by providing insufficient funds for basic social needs.

With the government-projected population of 97.5 million Filipinos in 2012, Palatino said, the national budget would fail to address the needs for education, health, food security and housing: 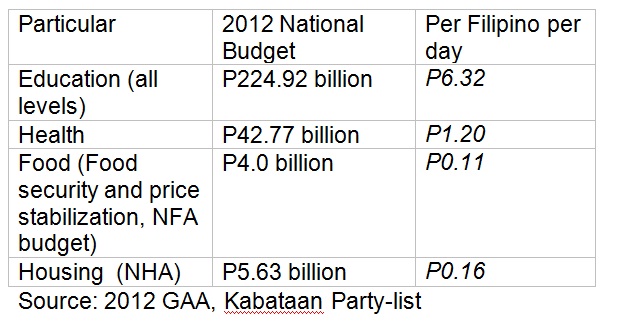 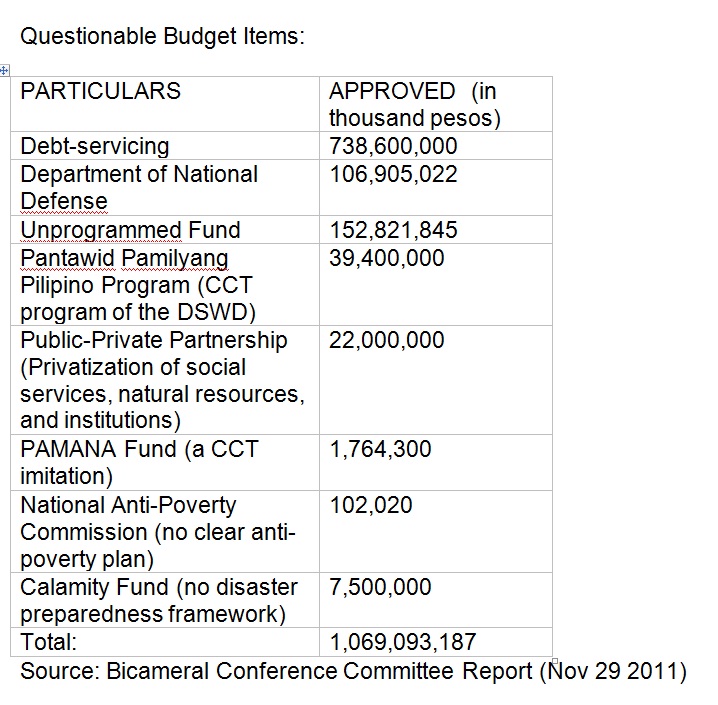 “We are fed up with imperialism, feudalism and bureaucrat capitalism! The few are still in power and the majority are still in dire poverty,” said Ferdinand Gaite, national chairman of Confederation for Unity, Recognition and Advancement of Government Employees (Courage), a national confederation of unions of government employees.

He told the police who blocked the protesters that what they (protesters) are fighting for the benefit of the people including the police. “There is what they call duty pay among the police and the military, this is included in their gross salary to augment their low salary of only P14,000 ($325),” said Gaite.

They may have failed in setting up their campout in Mendiola but the youth and students continued what they started. The groups had their campout at Plaza Miranda instead. A force from the labor sector will join them on their Day 2 of campout protests.

“We may be blocked by the police but this mobilization is still a victory,” Crisostomo said.

He added, “We have victory because we walked-out from our classes and workplaces and marched here in Recto. This marks our first day. The fascism of the state only shows that our protest action is right, thus, they are hindering us from showing to the people that we will fight for our rights and welfare. We will return and occupy Mendiola.”

In a statement sent to Bulatlat. At 6:00 am of Dec. 7 the protesters conducted a morning exercise routine with calls to “invert the triangle structure of society.” Organizations also held socio-political discussions.

“The policemen and the government they serve should remember that Mendiola is historical because it is a site of the people’s resistance against a fascist regime. Chino Roces, whose statue is a landmark in Mendiola, was in fact a figure of the resistance. And this occupation will be done under the same premise. This premise they must respect and they must step aside for the occupation,” said Crisostomo.