You Are Here: Home → 2012 → January → 12 → In pursuit of justice, more groups support impeachment of Corona

In pursuit of justice, more groups support impeachment of Corona

Mrs. Edita Burgos, mother of missing activist Jonas, and other victims of the Arroyo administration believe that the removal of Chief Justice Renato Corona is a step forward in holding Arroyo accountable.

Speaking in a press conference during the launch of Gloria Panagutin! Movement, Mrs. Burgos said the impeachment trial of Corona is important especially for the victims of human rights violations. “We cannot obtain justice under the present system. They are the ones protecting the accused. During Arroyo’s term, many were disappeared and killed,” Mrs. Burgos said. Her son Jonas was abducted by suspected state agents on April 28, 2007 in a mall in Quezon City.

In the case of Jonas, the high court dropped former president Gloria Macapagal-Arroyo as one of the respondents in Mrs. Burgos’s petition seeking the reversal of the Court of Appeals’ decision absolving police and military officials implicated in the disappearance of her son.

Mrs. Burgos deemed that the removal of Corona is a step forward in holding Arroyo accountable.

Corona was impeached in December last year by the House of Representatives as 188 lawmakers signed the impeachment complaint.

Like many relatives of victims of enforced disappearances and extrajudicial killings, Mrs. Burgos said Arroyo should be held accountable for human rights violations as the former commander-in-chief of the Armed Forces.

Two bishops – Bishop Elmer Bolocon of the United Church of Christ of the Philippines (UCCP) and Bishop Solito Toquero of the United Methodist Church – also wanted Arroyo to be held liable for human rights violations, including those committed against members of their churches.

“We need genuine justice. With Corona at the Supreme Court, this would not be possible,” Bolocon said.

Bolocon said that during his term as UCCP general secretary from 2005 to 2006, nineteen of their pastors and members were killed. The UCCP filed last year a civil case against Arroyo for the violations, citing the principle of command responsibility.

“We want justice and that would only be possible if the one who would lead the Supreme Court is just,” Bolocon said.

For his part, Toquero said impeaching Corona is part of the cleansing process of the country.

Fr. Joe Dizon, convenor of the Gloria Panagutin! Movement said Corona is there at the Supreme Court to protect Arroyo. 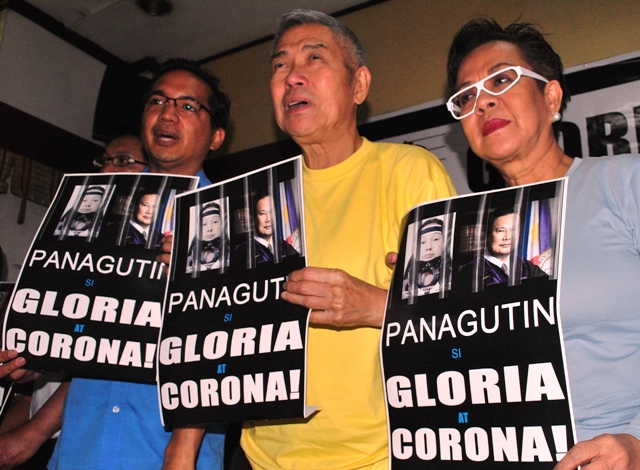 “We are expressing support for the impeachment of Corona because this is part of our fight to make Arroyo accountable. Arroyo cannot escape responsibility for all the crimes she did during her nine-year reign,” Dizon said, adding that hospital arrest is not enough. “For the country to move on, Arroyo must be sent to jail.”
Award-winning director and actor Bibeth Orteza, spokeswoman of Pagbabago! and one of the conveners of the newly-formed alliance said: “We must finish what we have started. There are many other cases where Arroyo should be made accountable. Puno na ang salop, dapat nang kalusin,” Orteza said, using a famous line of the late actor Fernando Poe Jr., the closest contender of Arroyo in the 2004 elections.

Joel Pimentel, spokesman of the Filipinos for Peace, Justice and Progress Movement (FPJM), said the struggle for justice has just begun. “Corona is just one of Arroyo’s cohorts. There is a long battle ahead,” he said.

The Gloria Panagutin! Movement called on the Aquino administration to file more cases against the Arroyos.
Arroyo is under hospital arrest at the Veterans Memorial Medical Center for charges of electoral sabotage. The plunder charge filed by progressive groups against Arroyo and other respondents in connection with the anomalous national broadband network deal with ZTE of China has been downgraded by the Ombudsman to graft and corruption.

Vigilance of the public

“The impeachment trial is a people’s trial. The issue here is betrayal of public trust. It is important that the people will be involved in this trial,” Casiño said.

Renato Reyes Jr., secretary general of Bagong Alyansang Makabayan (Bayan) called on the public to monitor the performance of public prosecutors. “Just like our experience in the Estrada impeachment, senator-judges are not insulated from politics. It is certain that there are those who will favor Corona and Arroyo. Let us subject all of them to public scrutiny,” Reyes said.

In January 2001, the foiled impeachment trial of former president Joseph Estrada prompted thousands of take the streets and protest, resulting in his ouster.

Reyes said the public support for the trial is essential in ensuring that the trial would reach its logical conclusion, the conviction of Corona.

Reyes also pointed out that the public should be vigilant against attempts by the Aquino administration to use the impeachment trial to control the SC.

Terry Ridon of the Kabataan Partylist deemed the same. “The end of the trial should make Arroyo accountable. We do not want an Aquino court to replace the Arroyo court.”

The Gloria Panagutin! Movement will hold a protest action at the Senate grounds on Monday in support of the impeachment trial.