Youths march a dragon to drive away ‘bad luck’ of price, tuition hikes 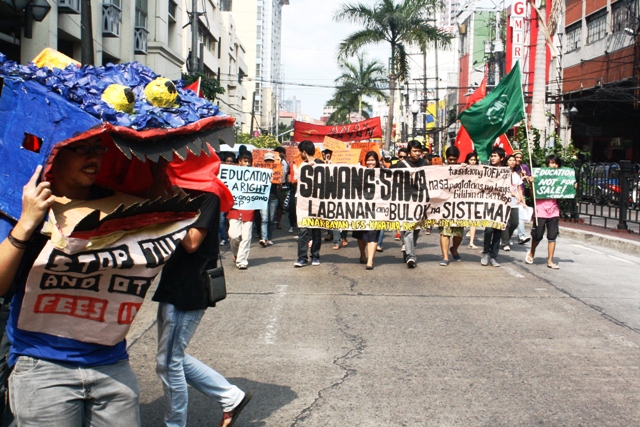 MANILA – Hoping that a dragon can indeed drive away bad luck, Filipino youths and students greeted the Chinese New Year with their own version of a marching “paper dragon,” praying that it could somehow help them drive away the “bad luck” represented by recurring Tuition and Other Fee Increases (TOFI), oil price hikes and continuous price hikes of other basic needs and services.

It was the first protest action held by the progressive youth groups this year.

“The new year greeted us early with oil price hikes, and of other bad news such as the implementation of K+12 and the closure of several college courses. We can expect no improvements from the government, on any aspect, this year,” said Vencer Crisostomo, national president of Anakbayan.

Youth leaders stated “proofs” that nothing by way of a relief, more so economic progress, seems forthcoming from the Aquino government this year or in the years after this.

“The recent demolition in Corazon De Jesus, a village in San Juan, is strong proof that the government is too incompetent to address poverty, even at exerting some effort at least,” Crisostomo said. 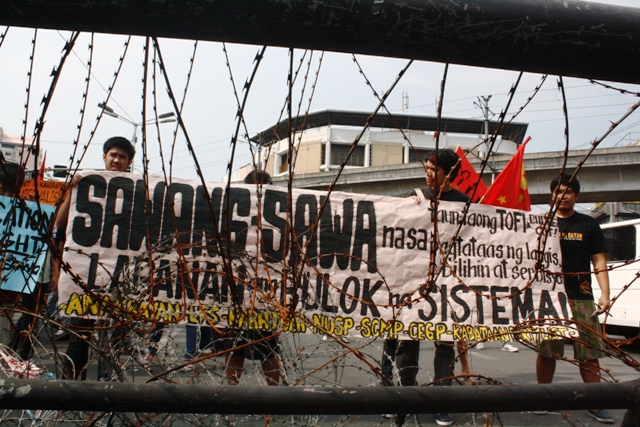 “It is clear to us that the Aquino government is showing no intention of promptly solving the economic crisis,” said Pauline Gidget Estella, national deputy general of the College Editors Guild of the Philippines (CEGP). “The Aquino government could not address the dilemma of ever present poverty in the midst of an unprecedented rise in price levels. What the administration has been doing is silencing the people through fascist acts and trying to appease their thirst for genuine change through populist-posturing policies,” she added.

Youth leaders challenged the Aquino government to adopt instead some reforms that can truly bring in changes in the economy. The Aquino government can start with policies that “will truly cater to the people’s needs and not of the multinational corporations,” said Gemma Canalig, spokesperson of the League of Filipino Students.