MANILA – During rallies and other political gatherings, National Artist for Literature Bienvenido Lumbera usually performs his poems. For a change, on his 80th birthday, the literary giant just listened and savored the verses sang and recited for him.

In the evening of April 11, loved ones and dearest friends celebrated Lumbera’s birthday in the garden of the Executive House of the University of the Philippines (UP) Diliman campus.

First to perform were members of the UP Singing Ambassadors with their versions of Filipino folk songs. The award-winning chorale later rendered a song written by Lumbera himself, with music by another National Artist Lucio San Pedro.

Jesse Santiago’s performance, a witty composition about getting old, elicited laughter from the audience.

Dessa Rizalina Ilagan serenaded Lumbera with her version of Ugoy ng Duyan and Lukso ng Dugo, a theme song of the movie Sigwa, a political film written by her father Bonifacio Ilagan. 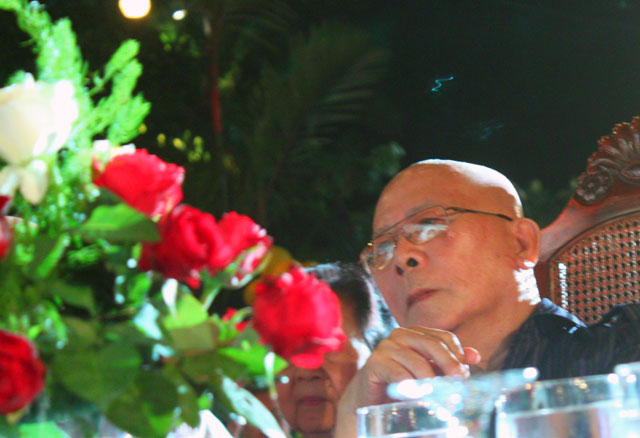 National Artist for Literature Bienvenido Lumbera listens to the songs and poems dedicated to him.(Photo by Ronalyn V. Olea / bulatlat.com)

“He is a pillar of Philippine literature, especially the literature of involvement,” Maranan said in Filipino.

Dr. Ed Clemente, one of the Board of Directors of the Center for People Empowerment and Governance (CenPeg), recalled that he first met Lumbera when he watched a play written by Lumbera during martial law. “The play was about the Philippine revolution but everybody who watched it knew it was also against the Marcos dictatorship,” Clemente said.

Gloc-9 said he met Lumbera during one of his autograph signing sessions at the Eastwood. “It is heartwarming and very humbling to have met Tatay Bien,” Gloc-9 said.

The highlight of all the performances was the poem recited and written by Lumbera’s two grandsons.


Lumbera’s wife Cynthia or Shayne to close friends said the gathering is a dream-come-true for Lumbera who had wanted to celebrate his 80th birthday with his closest friends and colleagues from Paksa, Indiana University, UP and from the national democratic movement.

Smiling, Lumbera thanked his family and his guests.