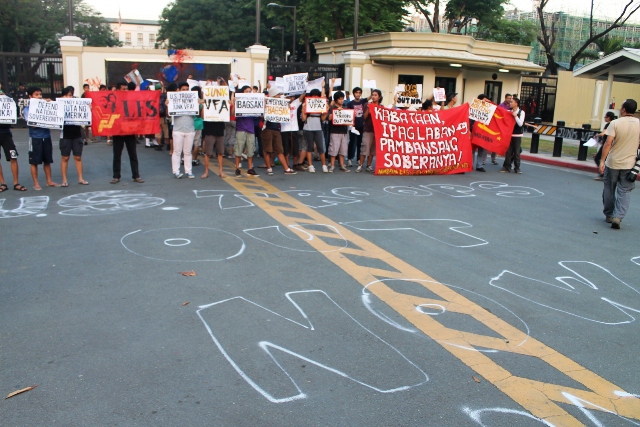 MANILA – As thousands of US troops start one of their largest Balikatan (US joint military) exercises in the Philippines today, youth-students and other activists groups held various protest actions.

“That’s the only time the youth has a free shot at the US embassy,” said Charisse Bañez, secretary general of Anakbayan. Without much police interference, the youth were able to express their disgust at the latest round of US-RP Balikatan exercises. 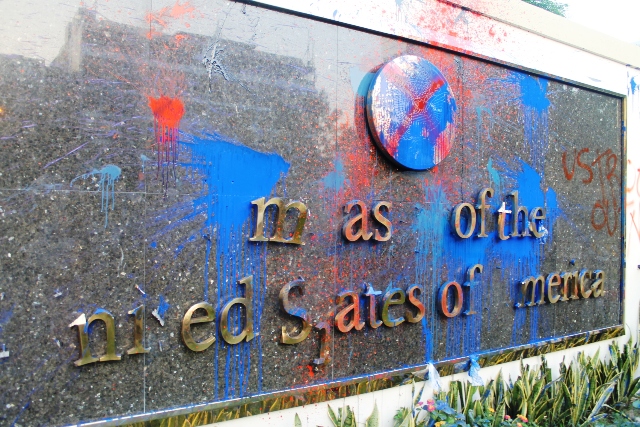 Calling for “an end to US military intervention” and condemning the “continuing history of US oppression and colonialism,” they lobbed paint-bombs at the seal of the US embassy. They reportedly used one of the guard’s equipment to further deface the US embassy seal.

The flash rally kicked off the protest caravans set today in time for the start of US-RP Balikatan exercises. 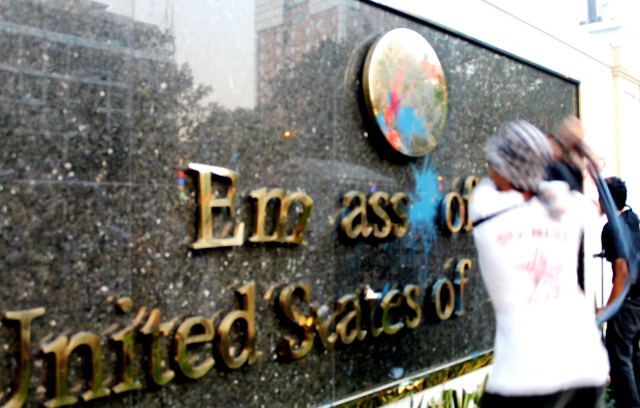 “The Balikatan is a symbol of continuing US imperialist dominance and control. The US government, for so long, has trampled on our sovereignty, raped our women and murdered our people. Their economic policies have brought poverty and misery to our nation,” said Charisse Bañez.

The youth activists assailed President Benigno “Noynoy” Aquino III for being a US “puppet and fanboy” and for inviting further US military intervention and increased US presence.

“He is thumping his chest, yakyaking, overacting and shouting sovereignty regarding China but he is subservient and meek as a lamb when it comes to the US troops’ invasion,” said Bañez.

Anakbayan said Aquino and US is “complicating and hyping” the conflict with China to serve as pretext for US troops’ “invasion” of the country. 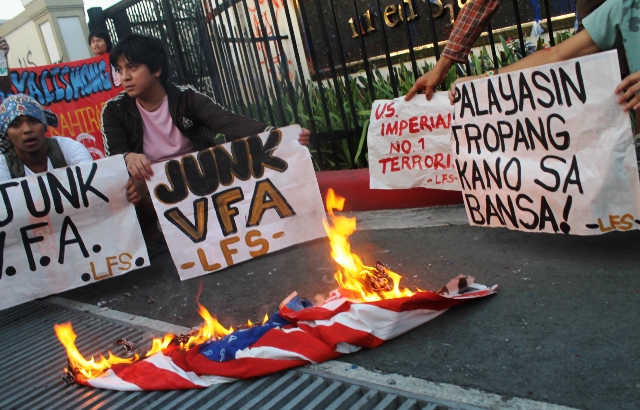 More than 6,000 US soldiers are expected to participate in this year’s US-RP Balikatan, marking an increase of troops and an expansion in scope of US military exercises.

Meanwhile, members of various peoples’ organizations converged near the Quezon City Hall. They held a brief program condemning the increased US military presence, and then they began a protest caravan against Balikatan. The caravan left Quezon City before 9 a.m. and headed to the sites of Balikatan exercises in Pampanga and Tarlac.