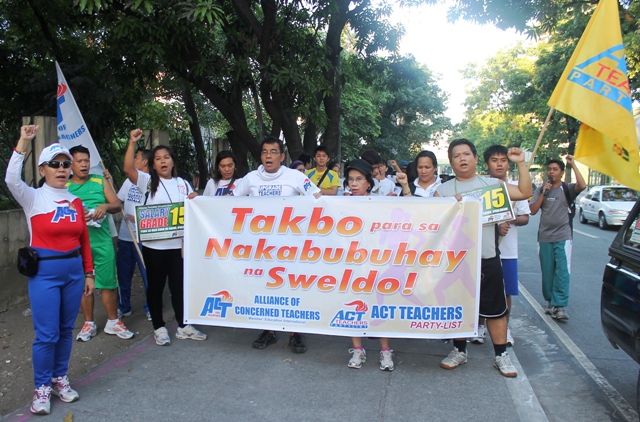 MANILA – They are overworked but underpaid. Public school teachers under the Alliance of Concerned Teachers (ACT) and its progressive party-list ACT Teachers Party joined a run, last Sunday April 29 in Quezon City, to call for a salary increase.
The teachers are demanding for an upgrade of the salary grade level of Teacher 1 to salary grade 15, for instructor 1 of state universities and colleges to salary grade 16, and an additional P6, 000 ($139) to the minimum pay of employees.

The teachers ran from Edsa corner Quezon Ave. to Quezon Memorial Circle carrying placards and streamers calling for an increase in their wages. 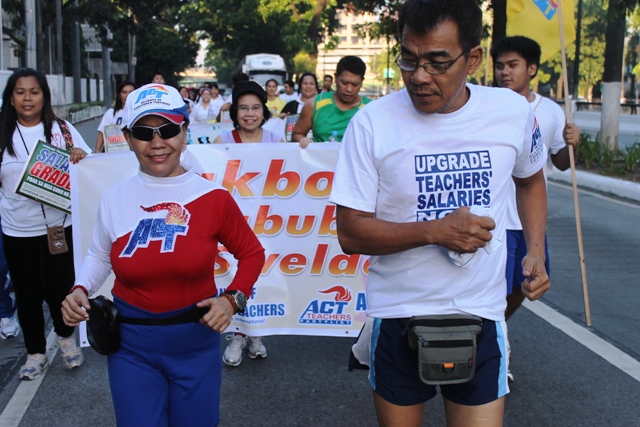 Rep. Antonio Tinio filed House Bill 2142 or The Public School Teachers’ Salary Upgrading Act in Congress in 2010. The bill mandates an increase in the entry-level salary grade of teachers from salary grade 11 to 15. From the current minimum pay of P15, 649 ($362) the bill seeks to increase it to P24,887 ($576)to ensure a decent standard of living for teachers and their families.

According to ACT, there are 180 Congressmen who have already signed and supported the salary upgrading bill. The teachers are hopeful that the Congress will pass the house bill.

Meanwhile, Tinio welcomed the support of Commission on Elections (Comelec) chairman Sixto Brillantes, Jr. for teachers’ rights and welfare. In a dialogue set up by ACT, Brillantes expressed his support to the teachers’ proposal for higher compensation and adequate protection of teachers who will be deputized by Comelec in the national polls next year.

Brillante said he had seen firsthand the sacrifices of teachers during elections and that he understands the need to compensate them fairly. “We will not object to whatever you [teachers] will ask for.” 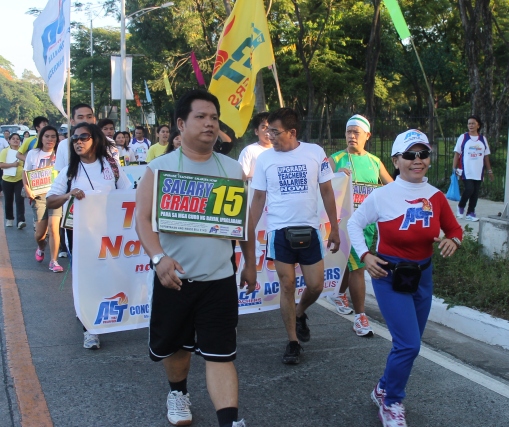 Tinio and ACT seeks higher pay for teachers who sit in the boards of election inspectors (BEIs) and support personnel (P5,000 and 1,5000, respectively for the entire three-day service). They also proposed a P3,000 ($69)honorarium for principals deputized as precinct supervisors.

Teachers vow to continuously fight for their salary, rights and welfare. “Together we will win this struggle. As we have won initial victories, we will again continue to fight for greater education budget and benefits and our other legitimate demands such as greater election service compensation and protection until the Congress and Malacañang are obliged to heed our demands. ”