You Are Here: Home → 2012 → May → 24 → Family questions circumstances surrounding death of OFW in Singapore

Manila-The family of a 23-year old overseas Filipino worker (OFW) who fell to her death in Singapore last May 12 is pleading to authorities to help them find justice. The parents of Apple Gamale refuse to accept the explanations of the Singapore police that their daughter jumped from a building because she was severely depressed.

Gamale’s body arrived at the Davao International Airport early this week and was immediately taken to the Gamale residence in Ilangay, Lupon Davao Oriental. 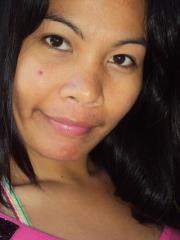 According to a report from the Davao City office of Migrante International, Gamale arrived in Singapore only last May 4 this year and began working for her new employer on May 9. On May 13, her family received a call from the Singapore police informing them that the young woman was killed after jumping from the balcony of the employer’s sixth floor condominium unit the previous day. The Philippine Embassy in Singapore, in the meantime, said that Gamale had been suffering from severe homesickness and depression and this was what prompted her to leap to her death. Her body was reportedly found on the fourth floor’s balcony.

The regional coordinator of Migrante International in Davao City Lanie Oñada said the Aquino government and its agencies involved in OFW employment and welfare should investigate the circumstances surrounding Gamale’s death. She said both the group and Gamale’s family find the Philippine Embassy in Singapore’s explanation questionable and unacceptable.

In her Facebook page, Gamale’s last posts previous to her arrival in Singapore carried a happy, excited and enthusiastic tone. It was evident that she was looking forward to going to Singapore. The last photos she posted featured her hanging out with friends in what was presumably a send-off party. 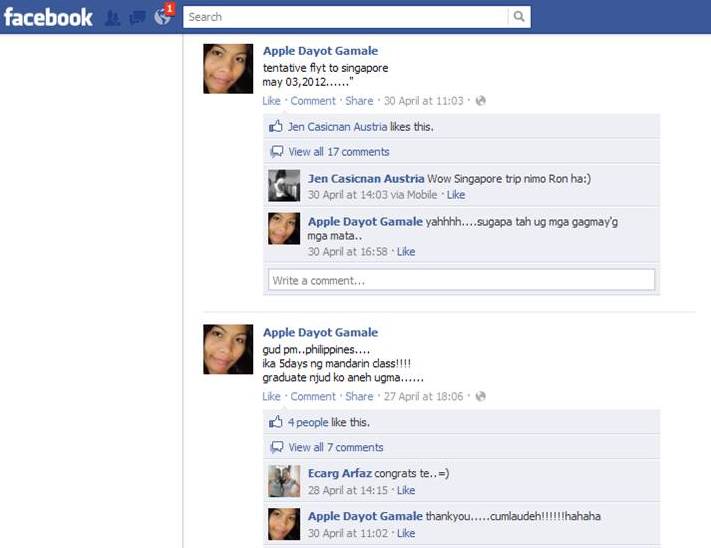 “The family has also sought the assistance of the National Bureau of Investigation (NBI). The NBI should autopsy the body and determine the true cause of death. According to her family, Apple was not prone to suicide and would not have done anything to hurt herself much less kill herself out of depression,” Oñada said.

The Migrante coordinator said that based on the initial data the family has succeeded in securing and the Singaporean police’s own descriptions, there is the possibility that Gamale did not commit suicide. She said tit was only the Philippine Embassy that released a statement that her death was a result of suicide.

“There is the strong possibility that the embassy said that to wash itself of its responsibility to conduct further investigations into the case.”

She said the embassy should always monitor the situation and protect OFWs to prevent death cases.

In interviews with local Davao media, Gamale’s cousin Lorena Mejos decried how they were not even given a copy of the Singaporean police report. She said they were not shown pictures of the actual scene where Gamale was killed.

“She only got there on May 4, but a few days later she’s already dead? It’s impossible to accept,” she said.

Migrante International Garry Martinez, in a previous interview with Bulatlat.com, said it is the responsibility of the Philippine government to look into the cases of OFWS who were killed under mysterious circumstances. 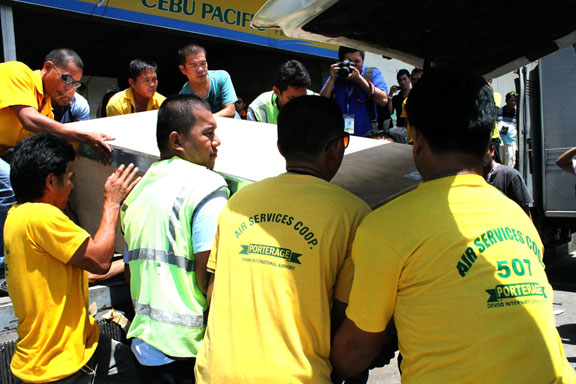 “The government continues to push Filipinos to leave and find work abroad because it relies heavily on their remittances to help keep the local economy afloat. The least that it can do is to help OFWs when they suffer emergencies or help their families when something tragic befalls them abroad. So many OFWs have died from so-called ‘suicides,’ but the reports on the deaths are either very sketchy or the details are highly improbable,” he said.

Martinez said often, embassies and consulates dismiss the cases of killed OFWs as caused by accidents or suicides when there are signs that that these were actually caused by foul play.

“In the end the embassies and consulates say that they simply don’t have the resources to launch full-scale investigations into the deaths, never mind that foul play is involved in the cases. The families of the OFWs who are killed are left shocked and refusing to believe that their loved ones took their own lives out of desperation or sadness. We have handled so many cases like this. The families insist and rightly so that the reports on their loved ones’ death often conflicted with actual autopsy findings and starkly went against everything they knew about the victims – many of the victims were women, with families, and determined to work abroad to earn money for their children. It was, as their families insist, so unlikely that they killed themselves when they had so much to live for,” he said. 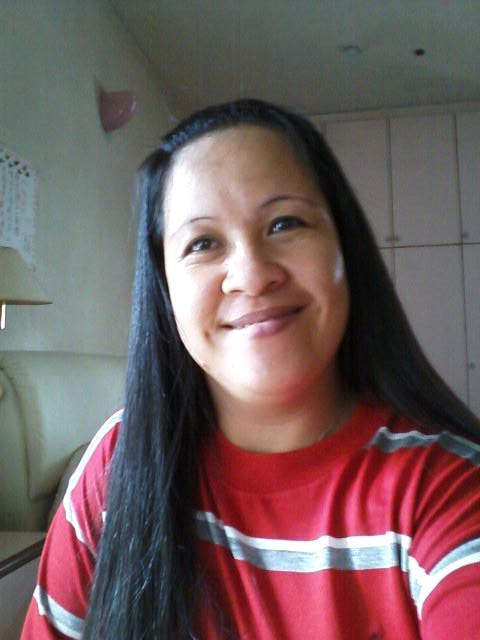 Earlier in March, a supposed case of murder-suicide case involving another OFW in Singapore was publicized. The Department of Foreign Affairs (DFA) said that a 33-year-old Filipina migrant worker and a 22-year-old man from Bangladesh, who was said to be her boyfriend, were found dead in a hotel in Singapore . The OFW was identified as Rezzilyn Lodia Vinegas and the male victim as Mohammad Sumon Lutfar. Both had slash wounds on their limbs and neck.

Vinegas originally hailed from Tagudin, Ilocos Sur. She left behind three children from a previous relationship. In various reports and interviews with family members, many threw doubt on the declaration of Singaporean authorities that she killed herself or killed her boyfriend. Her last updates on Facebook page featured many photos of her with her boyfriend and both appeared happy.

In media reports, Foreign Affairs Spokesperson Raul Hernandez said an autopsy was conducted, and that the Philippine Embassy in Singapore helped in the police investigations.