“The next day, they blockaded the entrance with drums, container vans, so that people and the construction materials they brought won’t be able to pass.”

ISLA PUTING BATO, Manila — “My neighbors were shouting ‘fire! fire!.’ I asked, ‘Where is it?’ because I had just come home. They said it was at the corner. When we looked, the fire was already big. My children became agitated. They said, ‘Mama, hurry, let’s go.’ I could only think of my children. My eldest, in her agitation, carried her shoes away. My youngest took the dog. My second child, maybe because she was so nervous, was in shock, so I just dragged her. When we arrived at the end of the street, I went back. I tried to save even just a little of what I was selling, but I couldn’t because the fire was already beside our house. In the end, we couldn’t save anything, not even one, not even our clothes, only ourselves.”

This was the story told by Isabel Solayao, 37, a resident of Isla Puting Bato, to Bulatlat.com two weeks after a fire razed their homes. More than 1500 families were affected by the blaze which began at around 4 p.m. until 6:00 in the evening.

The fire started at a house near the entrance to Isla Puting Bato. There was only one way for the residents to flee: to the end of the Isla. Some residents scaled the wall while others jumped into the sea for safety. 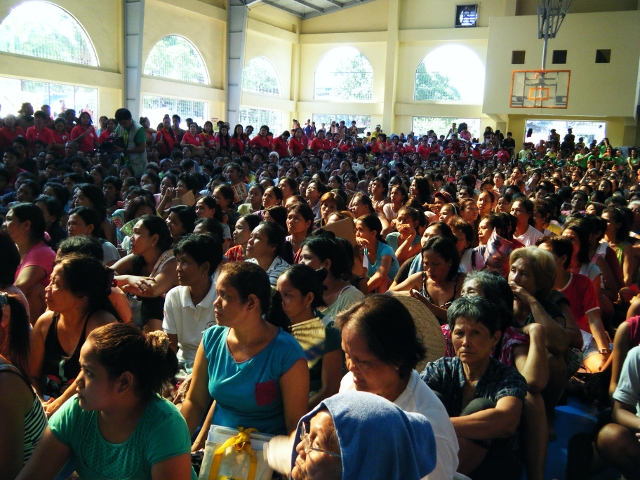 “Even when the firefighters came, the fire was not put out quickly,” Luzviminda Solayao, 55, a relative of Isabel, said. “They said they did not have enough water. The hose they were bringing was also small. But you should, of course, know that when there’s a fire, you should have plenty of water because you need to rescue the lives of the victims.”

The cause of the fire remains unclear. There are rumors that it was caused by a gas tank exploding or illegal electrical connections or a child playing with matches. But some residents believe otherwise – contending that the fire was not accidental and that the perpetrators might have been paid.

“What they’re telling us is that there was a couple who fought,” Isabel said. “The husband allegedly poured gasoline on his wife. But the wife was able to run to the barangay hall. So the man burned down their house. Purportedly they did not really own the house; they were only renting it.”

The couple has not been sighted after the event.

For two weeks now, affected residents are housed at the Delpan Sports Complex and in a nearby school. But the living conditions are at their worst, which is why some residents like Isabel and Luzviminda chose to go back to the Isla, to their burnt homes.

“We stayed in Delpan for two days,” Isabel said. “We went back to our homes because it was really hard to live there. First of all, there were so many of us. We can’t stay in a place with that many people. Second, you can’t sleep well because there was barely any room to move. Third, the children were getting sore eyes; they also started to cough… Maybe it was because of the dust, the dirt. That is why we decided to go back; at least we have somewhere to sleep on even if it’s just cement.”

“I also brought the children back because it was too crowded,” Luzviminda said. Initially, only Isabel and her husband opted to stay in the Isla instead of staying in the evacuation center. “You can’t even move there. The people were also getting sick, the children especially. The CR (comfort room) is also not enough for that many people. Just think of it, you have 1000 families housed there.”

The Philippine Ports Authority (PPA), however, have refused to let residents with their construction materials return to the Isla, saying it is government property and also citing safety issues.

“[After the fire] The next day, they blockaded the entrance with drums, container vans, so that people and the construction materials they brought won’t be able to pass,” Isabel said. “What we do is we buy materials one by one, but we are still being reprimanded.”

Still, in the ruins of the houses in Isla Puting Bato, determined residents have found ways to slip in unnoticed, slowly rebuilding what was destroyed. Galvanized roofs, however, could not be slipped in so they will have to rely on plywood and cement for now.

Some residents have also not been able to go back because of their financial condition.

“Only a few of us came back,” Isabel said. “Because some do not have the money to buy even some tarpaulin to shelter themselves.”

Luzvminda, on the other hand, has not been able to rebuild her house yet. 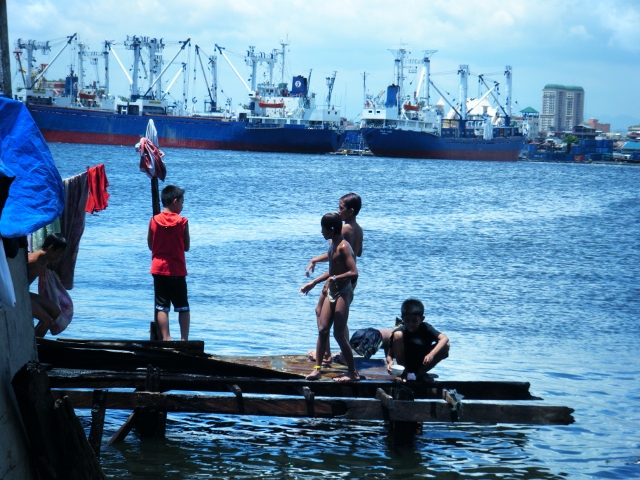 “We still haven’t rebuilt it because we don’t have money to buy materials,” she said. “My husband does not have work. My children’s wages are only enough to buy food for us. We only have plastics for now.”

With her husband currently unemployed, Luzviminda, along with some other women, work as peelers of garlic in nearby Divisoria. They are paid five pesos for every kilo of garlic they peel.

Isabel, on the other hand, tends a small store in their house.

“I have a small store so that I would have my own money because all my children are going to school,” she said. “Because life today is hard, my husband gets only a small amount of money, so I have to help him.”

Her husband works as a kuliglig driver. Kuliglig is a tricycle powered by a improvised motorized bicycle.

Isla Puting Bato has long since been a disputed property. In 1986, the houses in the area had already been demolished. Displaced residents were relocated to Bulacan and Dagat-Dagatan. Some of them, however, like Isabel’s parents, decided to go back to the Isla because their livelihood was there. Her parents were fishermen, much like the residents who recently lost their homes.

The government is once again offering relocation to the residents. Vice President Jejomar Binay, who had visited Delpan Sports Complex last May 25, told them that those who wish to return to their respective provinces need only to ask for the assistance of the Department of Social Welfare and Development.

But Luzviminda and her co-members of Ahon Isla, a group dedicated to defending the urban poor’s rights at Isla Puting Bato, are doubtful of the offers.

“We will really refuse because we have to fight for our rights here because this is where our livelihood is and our children are near the hospital,” she said. “We can also walk to Divisoria. Even if the jeepney fare is only eight pesos, we still feel the need to save it. We walk to Divisoria. That is why we are pained that we are being driven out of here. Most of the residents here are firm that we will fight for our right to stay here for as long as it is needed. I got married here, and so did my children. Our livelihood is also here: fishermen, kuliglig [drivers], sidecar boys, those who peel the skin off garlic even if we are only paid five pesos… We need to fight. We really don’t want to leave Isla Puting Bato.” 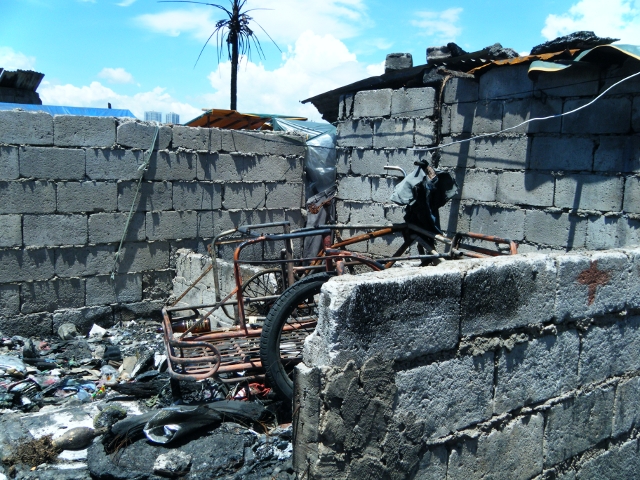 “They are telling us to complete the requirements so that we will be relocated quickly,” Isabel said. “So we asked them if our children will be able to study in the relocation sites. Unlike here, even though we only earn a little, we can still send our children to school. This is where we work. In the places where they are relocating us, what will our livelihood be?”

Last May 25, two batches of Isla Puting Bato residents were sent to inspect the relocation sites being offered by the National Housing Authority.

The reasons for driving them out, however, are unclear.

“The Philippine Port Authority (PPA) can’t give us an answer when we ask them why our houses are being demolished,” Isabel said. “They can’t give us a proper answer.”

Additionally, no consultations between the PPA and the residents have been held.

“The local government does not seem to have any plan for us,” Luzviminda added. “But the people who want to demolish our houses – from the PPA – said they don’t have the budget [for the demolition], which is why we are confused at what happened. Maybe because they didn’t have money, they just decided to burn down the place.”

“This is the worst kind of demolition.” Fernando Hicap, national chairman of the Pambansang Lakas ng Kilusang Mamamalakaya ng Pilipinas (PAMALAKAYA), said in a meeting among residents of Isla Puting Bato. “There is no regard at all for human life.”

The recent fire in Isla Puting Bato, if set on purpose, is allegedly also part of the Aquino administration’s public-private partnership projects. Casinos and shopping malls, which are targeted to be funded by foreign investors, are said to be some of the infrastructures they are planning to build there.

“They can’t steal anything from us,” Anakpawis Partylist Representative Rafael Mariano said in the same meeting. “Why should we let them steal our rights?”

He also likened the urban poor’s situation to those of farmers. “If you take away the land they cultivate, it would be difficult to regain their lives.”

“They are taking away the future of our families and giving them to a select few,” Hicap also said. “This is our challenge: if we are truly fishermen, we should fight for our rights.”