LOPEZ, Quezon – From February to April this year, soldiers of the 85th Infantry Battalion of the Philippine Army (IBPA) transformed the San Francisco Culong Elementary School into their sleeping quarters. Sometimes, the soldiers, holding their high-powered rifles, would enter the classrooms.

In the villages visited by the Save Bondoc Peninsula Movement, a network of Church-based groups, human rights advocates and people’s organizations, military presence has become an ordinary occurrence.

According to the Children’s Rehabilitation Center (CRC), children in these areas had become victims of different forms of violence. The CRC and Salinlahi Alliance for Children’s Concerns facilitated psychosocial activities during the eight-day mercy mission and peace caravan of the Save Bondoc Peninsula Movement held June 25 to July 2.

“Some of the children were crying while they narrate their stories,” Jacqueline Ruiz, CRC executive director, said during the public forum, July 2. “At the mere sight of soldiers, many of the children expressed fear and anxiety.”

Children said they were afraid to go to school because of the military presence, Ruiz said.

More than 200 children aged five to 16 years old participated in the activities held in San Andres and Lopez towns in Quezon province, south of Manila.

Primarily through play and workshops, the facilitators encouraged children to express their feelings. 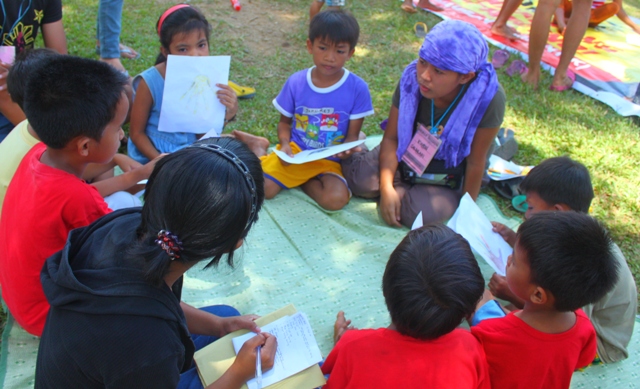 The CRC reported that some of those interviewed exhibited anger toward the soldiers. “These children were direct victims. One said soldiers stole their boat. Another said the soldiers took their rice and some related that the soldiers harassed their parents,” the CRC said in its report. 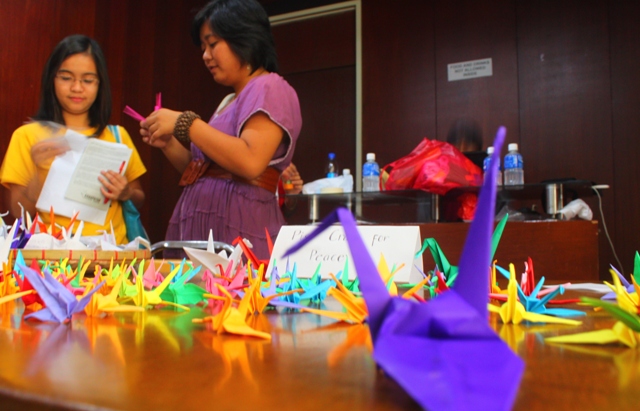 Some of the peace cranes created by children.(Photo by Ronalyn V. Olea/ bulatlat.com)

Some of the children said soldiers encouraged them to play with guns. These children were able to identify the type of guns and bullets they were able to get hold of.

Sometimes, the soldiers would invite children to what they call as their rest house located a few meters away from the local elementary school in San Francisco village, Lopez. Children are made to watch movies depicting violence. One said he saw a film containing scenes of soldiers being beheaded by Muslims.

Some of the children were ordered by soldiers to fetch water and buy cigarettes and liquor. Those in coastal village of Talisay in San Andres town said they were invited by soldiers to swim with them.

“These incidents once again prove that Oplan Bayanihan does not spare the children,” Ruiz said, referring to Aquino administration’s counterinsurgency program.

In other parts of the country, the CRC and the Human Rights Watch documented similar cases of use of schools for military purposes.

A 1992 domestic law prohibits the use of schools for military purposes.

According to CRC, under the Aquino administration, five children had been killed mostly due to strafing and indiscriminate firing.

“The women and children suffer the most in the government’s ruthless counterinsurgency operations,” Orly Marcellana, Save Bondoc Peninsula Movement spokesman, said. “If they are going after the NPAs, then they should go after the NPAs and spare the innocent civilians from their mindless war against the belligerent group.”

During the psychosocial sessions, the children made cranes for peace. Written on the folded papers was the children’s collective wish — “Pull out military troops.” The CRC aims to collect one million peace cranes until December 10, International Human Rights Day.