Radio workers union hailed the strike as pivotal to the resolution of the labor dispute saying that the “weight of workers’ strike (is) a valid and only option to defend the workers” interest, especially with the current “rampant wage freeze and wage hike moratorium among the yellow traditional labor unions.”

In the CBA, the Radio Mindanao Network (RMN) management agreed to grant the workers for the 2nd and 3rd year of the CBA a $0.47 to $0.93 wage hike, or an increase of $24 monthly for this year and $36 monthly for next year, according to Rey Fabe, RMN Davao Employees Union (RDEU) president.

Last year in November, after threatening to hold a strike, the union was able to clinch a deal with the management who granted the workers a lumpsum appropriation of $232.

RDEU, an affiliate of the militant National Federation of Labor Unions and Kilusang Mayo Uno (NAFLU-KMU), hailed the strike as pivotal to the resolution of the labor dispute saying that the “weight of workers’ strike (is) a valid and only option to defend the workers” interest, especially with the current “rampant wage freeze and wage hike moratorium among the yellow traditional labor unions.”

In a statement, the RDEU-NAFLU-KMU said: “The workers strike demonstrated that only through the concerted action of workers can it overcome the limitation and inutility of the Philippine Labor Code and the Aquino government. Delaying tactics and other provisions in the conduct of Collective Bargaining negotiations have only favored the capitalist RMN and denied the workers its right to higher wages and benefits. The RDEU showed that it cannot be cowed and that it cannot wait for the mercy of the RMN management. It only has to rely on its own strength to protect its interest.” 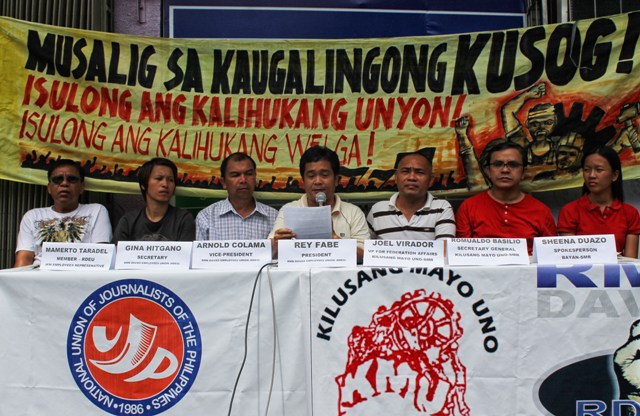 IN UNION, THERE IS STRENGTH. Radio workers in Davao City hold a press conference Thursday as they declare victory on their struggle for their rights and benefits. (Photo by Ace R. Morandante / Davao Today)

“At first, I was afraid that my colleagues would give up in the middle of the strike. But, I was proven wrong. Unity was the key amidst the management’s oppression. Even it was the first time we held a strike, slept in the streets and endured many sacrifices, we won,” remarked Gina Hitgano, RDEU Secretary.

For his part, “We also gained political gains like to invoke the last-in-first-out should any retrenchment occur. The union was also afforded a “close-shop” privilege, which means that all current employees and future new rank and file employees are automatic union members.”

“We thank all our colleagues for not giving up. We are truly one,” said Arnold Colama, RDEU Vice-president.­­

For his part, National Union of Journalists in the Philippines officer Jeffrey Tupas, said “It shows that we can win a battle like that. It is inspiring as it was a wake-up call for journalists who are silent about their own experience of injustice–that something good can be achieved if only they rise above the situation. This brings me to the idea that there is really a necessity for journalists to come together and push for an industry-wide union for media.”

Journalist Germelina Lacorte also posted on her facebook status: “Long Live the RDEU! the RDEU’s triumph should serve as inspiration to all media workers living under the condition of exploitation and economic oppression, making them susceptible to corrupt interest groups whoever they maybe. May the RDEU’s triumph advance us further in our struggle for a just and humane society!”

Addressing to media friends who attended press conference at the strike camp Thurdsday, Fabe said “If you were not here, we cannot air our sentiments. Now we are urging all media workers to organize their own unions, face the big broadcasting and print companies and fights for media welfare and rights as workers.”

The RMN management meanwhile issued a memorandum to defer radio broadcast till Monday. The IFM station stopped airing since the start of the strike last July 10, while the top-rating DXDC ceased broadcast five days before the resumption of airing earlier today July 19.

“Regular broadcast operations shall commence officially by Monday, July 23, 2012 (so that) all personnel and staff be accorded sufficient time within which to obtain (their) much needed rest,” said the management’s memorandum as read by Fabe. (John Rizle Saligumba/davaotoday.com)