MANILA – They braved the heavy downpour and then the extreme heat to air their grievances.

Some 1,000 protesters from Southern Tagalog, under the banner of the local chapter of Bagong Alyansang Makabayan (Bayan) and Save Bondoc Peninsula Movement held a three-day Lakbayan (people’s march) from San Pedro, Laguna to Quezon City, culminating in the protest along Commonwealth avenue on July 23.

Protesters decried the land grabbing and militarization in the countryside.

United Luisita Workers’ Union (Ulwu) chairman Lito Bais said, “It has been three months since the Supreme Court’s final decision to distribute Hacienda Luisita and all we see are the obvious political maneuvers by the President’s family and the DAR [Department of Agrarian Reform] to circumvent the Supreme Court decision.”

The Supreme Court issued its final ruling April 24 ordering the distribution of more than 6,000 hectares of land in the hacienda controlled by the Cojuangco-Aquinos. The high court ordered the DAR to implement the decision.

Ulwu criticized the DAR for “the highly questionable verification and screening process.”

Reports said the DAR has interviewed 8,400 farmworkers when the tentative list of beneficiaries includes only a total of 6,296 farmers who signed the stock distribution option in 1989. In just two villages, the DAR already interviewed 6,000 farmworkers and the verification process is not yet finished.

Ulwu and Kilusang Magbubukid ng Pilipinas (KMP) said the DAR’s actions “are all in accordance with the Cojuangcos move to bloat the number of beneficiaries, further reduce the size of land for distribution, sow confusion and disunity among farmworkers, and eventually put their dummies and loyalists as so-called beneficiaries.”

The night before Aquino delivered his SONA, members of KMP and AMGL held a vigil protest in front of the DAR office in Quezon City.

The groups slammed the agency for “sleeping” on the petition to revoke the conversion order of the 500-hectare land at the Balete village inside Hacienda Luisita. The petition was filed by Alyansa ng Magbubukid sa Asyenda Luisita on January 5 and has not been acted upon.

The Rizal Commercial Banking Corporation (RCBC) is claiming ownership of the 184-hectare land at Balete village. The dispute resulted to a series of violent confrontations between the farmers and RCBC security guards and policemen. The RCBC also filed criminal charges against leaders and members of Ambala.

“DAR is totally acting on Aquino’s dictate, instead of weighing the basis of our petition, it has been conspiring with the Cojuangco-Aquinos to undermine the decision of the Supreme Court,” Joseph Canlas, AMGL chairman said.

“The continuing deception in Hacienda Luisita concretely shows the true state of the nation and the Filipino peasantry,” KMP spokesman Antonio Flores said. “No amount of political cosmetics can change the fact that Aquino continues to be Luisita’s anti-peasant haciendero.”

AMGL also demanded the immediate distribution of lands such as the 3,100 hectares in Fort Magsaysay Military Reservation (FMMR) in Nueva Ecija, 400 hectares in Bayambang, Pangasinan; rice lands in southeastern Pampanga, Tarlac, Nueva Ecija; ancestral lands of Ayta, Dumagat, Bugkalot and Igorot communities in Pampanga, Zambales, Aurora and Nueva Ecija. Lands cultivated by indigenous people’s communities are usual sites of mining in the region such as in Zambales and Aurora. 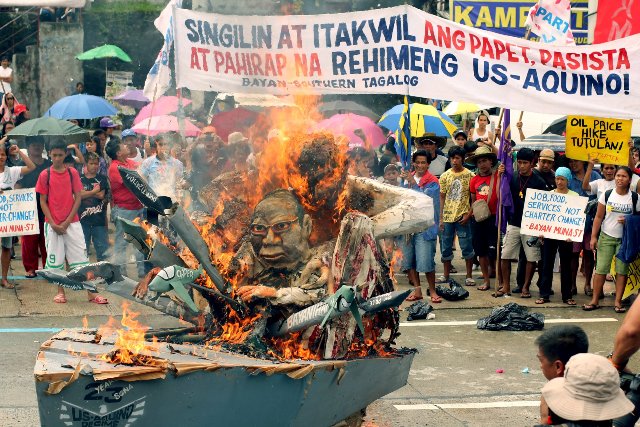 “The gravity of the human rights violations committed by the military and state forces indicates the poor performance of the Aquino administration for the past two years,” said Orly Marcellana, spokesman of the SBPM. Marcellana cited as an example the intensified militarization in Southern Quezon and Bondoc Peninsula, which resulted to an escalating number of human right violations. To date, eight battalions of Philippine Army, Philippine National Police and Citizens Armed Force Geographical Unit are deployed in 22 towns of South Quezon alone.

“Aquino has targeted activists and progressive leaders through his Oplan Bayanihan, when he should be going after Ret. Major General Jovito Palparan who is still at large today despite a warrant of arrest and prosecuting former president Gloria Macapagal Arroyo,” Marcellana said.

Palparan, implicated in the enforced disappearance of University of the Philippines (UP) students Karen Empeño and Sherlyn Cadapan, remain at large almost seven months since a local court in Bulacan issued a warrant of arrest against him and three others for kidnapping and serious illegal detention.

Palparan is also the alleged mastermind in the murder of scores of Southern Luzon activists, including Eden Marcellana and Eddie Gumanoy.

The Southern Tagalog contingent also staged protest actions in front of the United States Embassy in Manila and at the foot of Chino Roces (formerly Mendiola) bridge before linking with Central Luzon farmers at DAR office on the night of July 22.