If you’ve ever had a conversation about the minimum wage with friends and family, you invariably hear an argument about how raising it would hurt small businesses.

The National Employment Law Project looked at Census data from 2009–11 and found that 66 percent of low-wage workers are employed by large businesses with over 100 employees. Moreover, it found that the fifty largest employers of low-wage workers have all recovered from the recession and are in strong financial positions:

Also, the study found that at these fifty firms, executive compensation averaged $9.4 million, and they have returned $174.8 billion to shareholders in dividends or share buybacks in the past five years.

Low-wage workers are concentrated in the service industry, and dominate the following sectors: 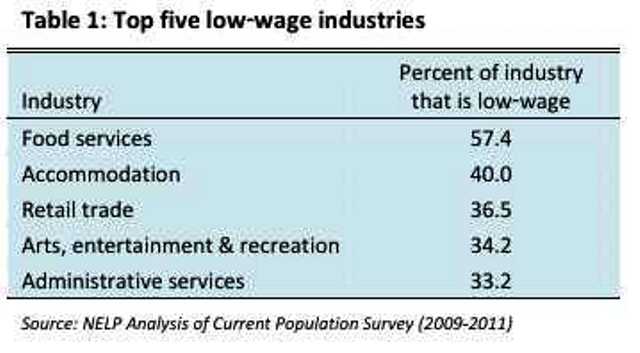 You can guess from looking at that list who the biggest abusers of low-wage labor are. Walmart, for example, employs 1.4 million Americans, and a vast majority of them at wages under $10 per hour. The highest-paid executive, however, earned over $18.4 million last year. Other key offenders are Yum! Brands (Taco Bell, Pizza Hut, KFC), McDonald’s, Target, Sears, Doctor’s Associates Inc (Subway), TJMaxx and Burger King.

Amazingly, one in four American jobs pays less than $10 per hour (26 percent), according to the study. And it’s not just those workers who suffer—big businesses that pay collectively pay millions of workers low wages set a basement for the rest of the wage scale and depress earnings above $10, too.

As we noted last month, some Congressional Democrats have joined forces with Ralph Nader to pass a bill that would raise the minimum wage to $10 per hour immediately, and then index it to the Consumer Price Index after one year.

But they are unlikely to find many allies on the other side of the aisle. This week, Representative Sean Duffy, a Tea Party star, was taped getting in a Jetta and driving away from a constituent asking him for help in raising the minimum wage.

Another, Representative Bill Young of Florida, somewhat oddly told a constituent asking about the minimum wage to “get a job” before walking away.