While many of the members of the Congress have their attire haute couture and not a few designed by the country’s top fashion (read: expensive) designers like Pitoy Moreno , nationalist lawmakers like Ilagan opted to stay grounded just like the people she vowed to serve.

This is how Gabriela Women’s Party described the gown of Representative Luz Ilagan, a true-blue Davaoeña, during President Aquino’s third State of the Nation Address on Monday.

While many of the members of the Congress have their attire haute couture and not a few designed by the country’s top fashion (read: expensive) designers like Pitoy Moreno, nationalist lawmakers like Ilagan opted to stay grounded just like the people she vowed to serve.

“No glitter. A simple straightforward design lifted from the peasant Filipiniana that does not detach itself from the frugal and humble lifestyle of the majority of our Filipino women,” Ilagan said in a statement.

Ilagan’s pink and green checkered gown, patterned after the traditional peasant woman garb or patadyong, is printed with GWPs call for women’s access to healthcare in Tagalog. Her gown’s fabric is from Iloilo, and cut designed and sewn by the Davao-based Limited Fashion House.

“It’s a LuzViMinda gown,” Ilagan told davaotoday.com, explaining that the print in Tagalog stands for Luzon, the Iloilo fabric stands for Visayas and where it’s sewn stands for Mindanao. The gown’s name also refers to her first name.

Ilagan’s peasant patadyong is accentuated by the alampay and tapis printed with Labka, an acronym for Libre, Angkop, Batayan at Kagyat na Serbisyong Kalusugan (Free, Sufficient, Basic and Immediate Medical Services) — a very important thing the Aquino administration lacks because of its “profit-oriented, US-dictated healthcare agenda.”

GWP said women and children’s health has gone from bad to worse with maternal mortality rates increasing to 221 deaths for every 100,000 live births. It added, women and children continue to die of easily preventable and curable illnesses.

Ilagan said the implementation of the Private-Public Partnerships with the corporatization of government-owned hospitals and the phase-out of charity wards while distributing PhilHealth cards will “drag women and their families to a deplorable state of un-health.”

In PNoy’s first Sona, Casiño’s barong reflected the call for a stop to the continuing extrajudicial killings of activists while last year, it called for the passage of the freedom of information bill. 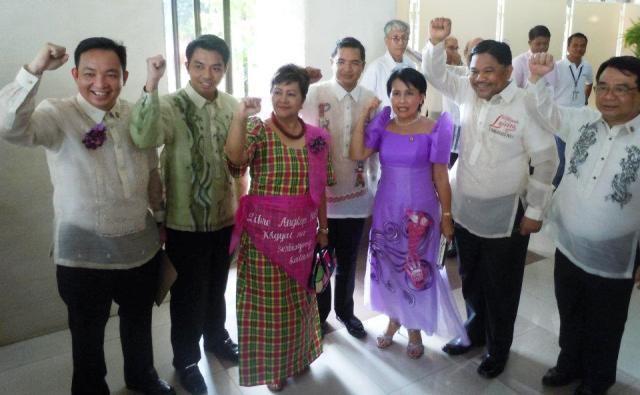 Following the April 24 Supreme Court final ruling, the more than 6,000-hectare Cojuangco-owned Hacienda Luisita was due for distribution to 6,296 farmer-beneficiaries. Until now, it has not been implemented.

“I believe fashion and art should not only cater to the whims and caprices of the rich but can also be a means to express the aspirations of the common folk,” Casiño said in a statement. (Marilou Aguirre-Tuburan/davaotoday.com)