“The government should allocate resources and funds needed for local disaster response systems to properly act. There should be consistent monitoring and updating of areas which are vulnerable to widespread flooding or flash floods (especially in low-lying areas or communities near large dams and rivers) and landslides (especially in geohazard zones and deforested areas).” – Kalikasan Party

Not waiting for the Benigno Aquino III government to get a move on, people’s organizations allied with the patriotic alliance Bagong Alyansang Makabayan (Bayan) and progressive party-list groups under the Makabayan Coalition have already begun efforts to assist thousands of Filipinos severely affected by the strong rains and floods that hit Luzon last August 6 and 7.

As of latest reports, 11 people have been killed in the last two days directly as a result of the floods while one million have been affected.

Migrante International, Gabriela, Anakpawis party-list, Kabataan were among the first to immediately call for aid in the form of food items, water and medicine for the affected residents of various cities and municipalities all over Luzon. Human rights groups Karapatan, Selda, Desaparecidos, Tanggol Bayi, Hustisya and the Ecumenical Mission for Justice and Peace (PEACE) also issued appeals for relief goods. The Citizens Disaster Response Center (CDRC) frequently posted photos and updates on the extent of the flooding and the severity of the impact on its website and Facebook account.

Groups like Kalikasan People’s Network for the Environment (Kalikasan-PNE) and the All-UP Workers Union based in the University of the Philippines (UP) in Diliman sponsored soup kitchens and provided residents in Montalban and Marikina areas with hot chicken and vegetable soup.

For its part, Anakpawis said its relief operations “Tulong Anakpawis” seeks to focus on helping the poorest of the poor among the affected residents.
“Most of the victims are workers and indigent folk in various communities,” said Fernando Hicap, the group’s vice chairman. According to initial reports and requests the group monitored, tens of thousands of families in Camanava, Paranaque, Taguig, Marikina, Manila, Quezon City, Laguna, Cavite and Rizal await immediate assistance in various evacuation centers.

“We have received reports that many families affected by this disaster were already under threat of losing their homes even before the floods. Some of them were recent fire victims, or have been relocated to flood-prone sites after they were evicted from their communities” Hicap said.

Actress Angel Locsin and local football athlete James Yonghusband assisted Gabriela and Gabriela Women’s Party (GWP) in their efforts to distribute food and clothes to affected residents in Brgy. San Antonio and Brgy. Bagong Silangan, both in Quezon City via the “Lingap Gabriela” relief mission. Also there to give a compassionate hand was theater luminary Monique Wilson.

The KMU and allied labor education and research institutions also launched “Task Force Obrero,” giving priority to affected communities of workers and their families. The Kilusang Magbubukid ng Pilipinas (KMP) has “Sagip Kanayunan 2012,” which focuses on helping peasant communities ravaged by the typhoons. It has so far launched missions in Rizal, Bulacan, Tarlac, Laguna and Isabela. 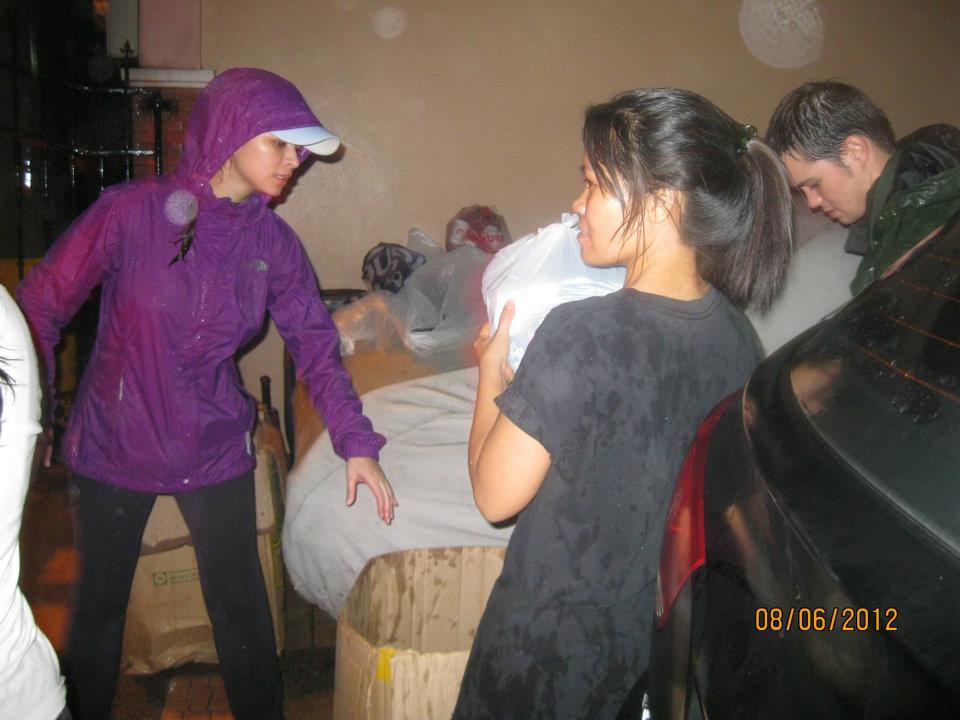 All the aforementioned people’s organizations have declared their offices to be open to donations in cash and kind. They have also posted bank account numbers on their respective websites and Facebook accounts where the public can leave their donations.

Their efforts to provide immediate emergency help, notwithstanding however, people’s organizations still decried how the main responsibility to help affected residents still remains with the government.

In Cabuyao, Laguna, the trade union center Pagkakaisa ng Manggagawa sa Timog Katagalugan-Kilusang Mayo Uno (Pamantik-KMU) said the Aquino administration’s response to help and protect Filipinos was very delayed. The group noted that the last three weeks had seen Luzon being battered by continuous rainfall and floods caused by recent typhoons Ferdie and Gener, but the government did not put any mechanisms in place to prevent the effects from reaching disaster levels. 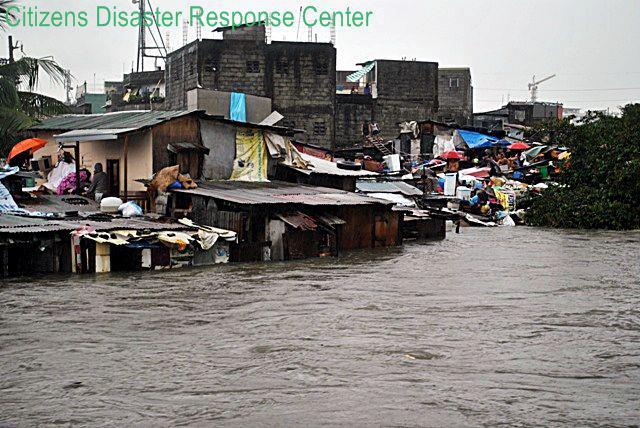 House in Quezon City have been inundated due to the heavy rains.(Photo courtesy of Citizens Disaster Response Center / bulatlat.com)

By the evening of August 6, various cities, major roads, commercial and residential areas within the National Capital Region were submerged. In the Southern Tagalog region, lakeside areas and numerous towns in San Mateo and Rodriguez Rizal, Cavite, Batangas, and Laguna such as San Pedro, Sta. Rosa, Cabuyao, Calamba and Sta. Cruz are also flooded, affecting thousands of families. The television networks have done extensive coverage to show how hundreds were forced to seek safety atop their houses, stranded on roofs.

Cause-oriented groups have also brought up the matter of the Aquino administration’s controversial decision to cancel flood control projects launched by the preceding government in areas in Luzon that were devastated by flooding from typhoons in 2011.

Last October 11, Quezon Rep. Danilo Suarez filed a resolution calling for investigations regarding the effect of the cancellation of the post-Ondoy and-Pepeng short term infrastructure rehabilitation projects (Popstrip) on the flood control program of the government.

The resolution noted that “months before the onset of the rainy season, the Aquino government through the Department of Public Works and Highway (DPWH) cancelled several flood control projects.”

Suarez in his resolution cited a DPWH press release dated July 28, 2010 wherein DPWH Secretary Rogelio Singson cancelled 19 approved negotiated projects worth P934.1 million ($22.2 million) under the Popstrip. The 19 were originally among 139 other projects or 42 contract packages financed in loans by the Japan International Cooperation Agency (JICA) for the urgent rehabilitation of flood control facilities worth P1.9 billion ($47.6 million).

Free alerts as warning system against calamities
Bayan Muna Rep. Teddy Casiño has also appealed to the government and various non-government organizations to coordinate with each other for stepped up relief and rehabilitation efforts in the affected areas. The lawmaker urged Malacañang to certify as urgent House Bill 5660 or the Free Mobile Alerts Act, which would mandate mobile phone companies to provide free text alerts to citizens in calamity-stricken areas. He said HB 5660, if enacted, would cure existing problems in the government’s early warning system during calamities and the hit or miss suspension of work and classes.

The bill requires government agencies to facilitate the issue of free mobile alerts, with telecom firms serving as tools for public information. In the event of an impending tropical storm, typhoon, floods, tsunami, or other calamities, mobile phone service providers are mandated to send out alerts at regular intervals as required by National Disaster Risk Reduction Management Council (NDRRMC) and Philippine Atmospheric, Geophysical and Astronomical Services Administration (PAGASA), Philippine Institute of Volcanology and Seismology (PHIVOLCS) and other relevant agencies.

“With the bill approved, it will be clear that it is both the government and the telecom companies’ duty to send out free mobile alerts at the earliest time possible,” Casiño said.

The lawmaker envisions the alerts to consist of up-to-date information from relevant agencies that will be sent directly to the mobile phone subscribers located near and within the affected areas. They should include contact information of local government units and other agencies required to respond to the situation. The alerts may contain other significant information, such as, but not limited to, evacuation areas, relief sites and pick-up points.

“The alerts should be free and included as part of the service providers’ auxiliary service. The alerts may be in the form of SMS (text messages), MMS, or email, as needed and appropriate. Also included in the bill are penalties for not sending out the alerts or sending out false information,” he explained.

“The government should allocate resources and funds needed for local disaster response systems to properly act. There should be consistent monitoring and updating of areas which are vulnerable to widespread flooding or flash floods (especially in low-lying areas or communities near large dams and rivers) and landslides (especially in geohazard zones and deforested areas). All support must be given to ensure prompt and proper warning, evacuation and rescue of communities in danger, especially among the urban and rural poor,” the group said.