You Are Here: Home → 2012 → November → 9 → Makabayan endorses five Senatorial candidates from other parties

MANILA – They belong to different political parties but they share common advocacies. This is the basis of the Makabayang Koalisyon ng Mamamayan (Makabayan) for endorsing five Senatorial candidates, Satur Ocampo, president of Makabayan said. “This manifests our confidence in the leadership qualities of the six, their personal integrity, and their pro-people stand on significant public issues.”

Almost all of the mentioned candidates were present during the press conference called by Makabayan last Thursday November 8 to accept the endorsement, except for Pimentel who was represented by his sister Gwen Pimentel. Pimentel was said to be presiding over a committee hearing on political dynasties.

“As we announced at our 2nd National Convention last September 7, our sole official candidate will be reinforced by other senatorial candidates that Makabayan will endorse or adopt based on a history of cooperative relationship with each of them on people’s issues and advocacies,” Ocampo said. 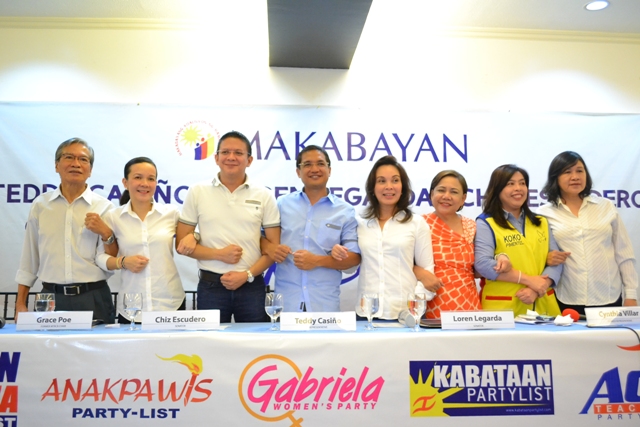 Ocampo said each of their chosen guest candidates has shared, or agreed to support, in varying degrees, certain Makabayan advocacies. Generally, these issues involve actions towards:

· Lowering the prices of oil products, water, power and other basic commodities and services by introducing reforms on taxation and pricing policies;

· Pushing for genuine agrarian reform; pro-people mining policies and environmental protection; equitable minimum wage and salary adjustments in the public and private sectors, subsidy for farmers and fisherfolk, and incentives for micro and small-medium enterprises;

· Increasing budgetary allocations for essential social services such as education, health and housing and reviewing the automatic appropriation for foreign-debt servicing to channel more public funds for social services and job-creation;

· Asserting national sovereignty and the people’s interest by thoroughly reviewing to rectify unequal bilateral treaties and agreements with the IMF-WB-WTO (International Monetary Fund-World Bank-World Trade Organization) triad and the Visiting Forces Agreement and upholding our territorial and exclusive economic zone claims in the West Philippine Sea;

· Working for the passage of the Freedom of Information and Whistleblowers Act, and opposing special treatment in handling criminal cases against Gloria Arroyo and other former officials;

· Seeking an end to extrajudicial killings and enforced disappearances of activists and journalists; amnesty to all political prisoners similar with military rebels;

· Repealing or amending the Cybercrime law and decriminalizing libel; and

· Urging the immediate release of detained National Democratic Front of the Philippines consultants and other JASIG-protected (Joint Agreement on Safety and Immunity Guarantees) persons and pushing for the resumption of peace talks between the GPH and the NDFP.

“We will take these issues to the people during the campaign – and, after victory, into the Senate — where the “6 champions” will endeavor to translate most of them into legislation,” Ocampo said.

The endorsed candidates, on the other hand, expressed gratitude for the progressive bloc’s endorsement.

“I thank the leaders and members of Makabayan for their endorsement. The organizations under Makabayan and I have long been partners in our aim for a better society as seen in our respective works to improve the lives of the poor, workers, women, children, teachers, OFWs, and our indigenous people,” Legarda said.

“Thank you to Makabayan Coalition for the endorsement. Let us unite for the welfare of our nation,” Villar said in her Facebook account.