Bai Bigkay Biyaon, a woman tribe leader ready to die for her land

MANILA – Even without speaking, Bai Bigkay Biyaon exudes an air of authority.

The 67-year-old woman is regarded as a datu (head) of the Ata Manobo tribe in Natulinan subvillage, Palm Hill village, Talaingod, Davao del Norte. She has chosen not to marry to look after the welfare of her tribe members.

The Ata Manobo tribe was living peacefully. Their livelihood depends on their land, which is planted with rice, vegetables, corn, coconut and other crops. When St. Augustine and Russel Mining Company and the soldiers came to their village, their world turned upside down.

On October 22 this year, soldiers of the 60th Infantry Battalion of the Philippine Army arrived in their community without consent. When asked why they are there, the soldiers said they are there to protect the exploration activities of the St. Augustine and Russel Mining Company from any possible attack from the New People’s Army (NPA). Since September, the mining company started building roads and other earthwork activities. 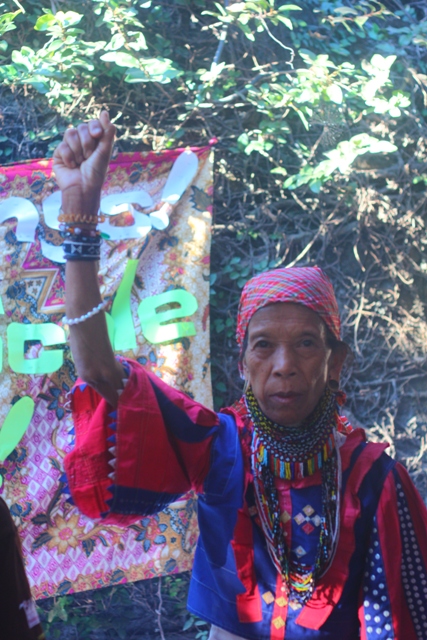 “The soldiers are protecting the interest of big mining companies,” Bai Bigkay said in the local dialect.

She lamented that the mining company and the soldiers did not get their consent. “They did not coordinate with us, even with the local village officials,” she said.

Bai Bigkay said soldiers have ruined their culture and their day-to-day activities.

The soldiers, in full battle gear, have been entering schools. For fear of the military, many students have stopped attending classes. Only 30 pupils have been going to the Natulinan Elementary School and only ten have continued to attend classes at the secondary school.

Since the soldiers arrived, some members of the Ata Manobo tribe have learned gambling and drinking alcohol. Some soldiers, she said, are smoking marijuana.
Bai Bigkay fears that their youth would emulate such bad practices. But more than anything else, Bai Bigkay wants the military and the mining company out for the preservation of their ancestral domain.

“We will not surrender our customary land to mining companies,” Bai Bigkay said.

“The land is ours. The land is not a piece of paper that the mining company could just fold and take away from us,” she said.

Bai Bigkay has heard the horrible stories of other indigenous peoples in Mindanao who were driven away by mining companies. She would not let the same thing happen to her tribe.

“We will not allow them to grab our land; we would die defending our land,” Bai Bigkay said.