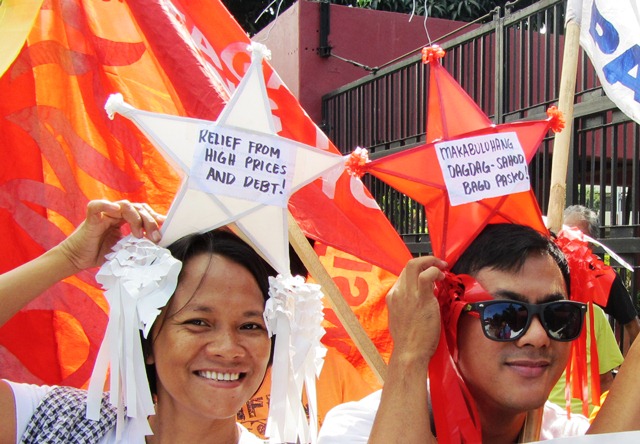 MANILA – Workers led by the Kilusang Mayo Uno (KMU) trooped to the gates of the House of Representatives this Tuesday to ask the lawmakers for “one of the best Yuletide gifts” it can probably give workers this Christmas – passing the now decade-long P125 ($2.98) across-the-board wage hike bill.

“This has got to be one of the worst Christmases for the country’s workers,” said Roger Soluta, KMU secretary-general. For years now, he said, workers have to contend with more and more depressed real wages. Add to that, “a wage cut is underway.” The Aquino government’s experiment with two-tier wage system was started early this year. In more than 10 regions where wage orders calling for two-tier wage rates were already issued, the government seeks to replace the already derided as low minimum wages prevailing in the country with an even lower amount called floor wages. 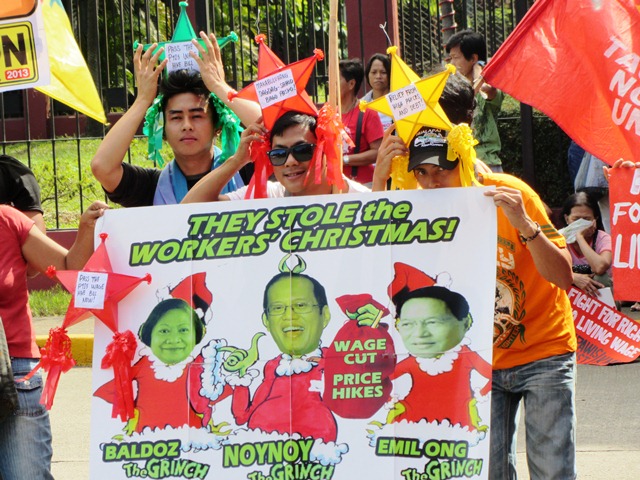 The Grinch is a fictional character best known for stealing and hoarding for himself other peoples’ Christmas gifts. He is the main character in a children’s book How the Grinch Stole Christmas!, which has also been turned into a movie starring Jim Carrey. Toward the story’s end the Grinch has had a change of heart – he returns the gifts to their rightful owners and joins the people in celebrating Christmas. And from then on his Christmas becomes a happy occasion. 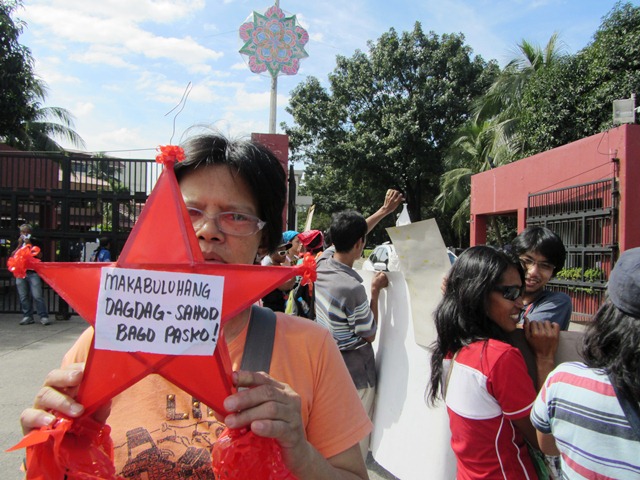 In the workers’ picket protest in front of the House of Representatives this Tuesday, some workers marched carrying Christmas lanterns with messages to the government.

“If the country’s legislators really want a better Christmas for workers, they will approve the P125 ($2.98) Wage Hike Bill immediately. That will be a step forward towards giving workers some relief from rising prices and growing indebtedness,” Soluta said. 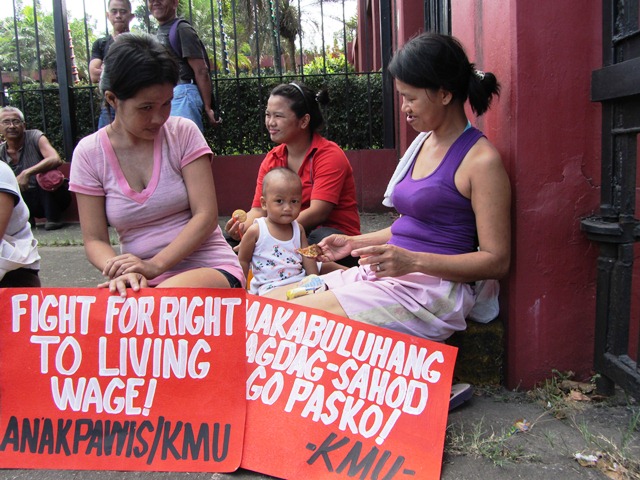 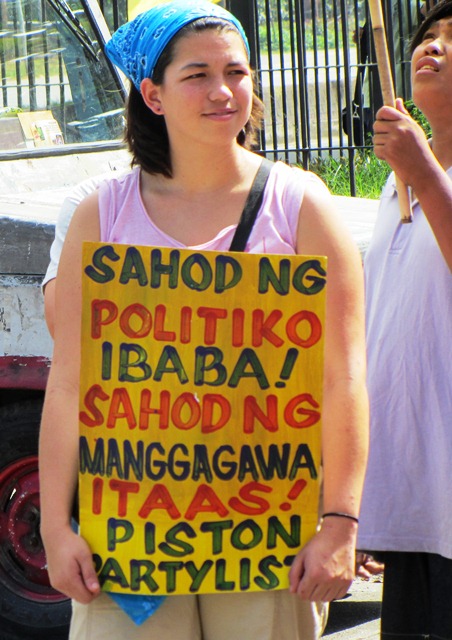 Despite claims of economic growth, hunger in the Philippines has even worsened under the Aquino government. The Social Weather Stations’ third-quarter survey shows hunger incidences increased to 21 per cent and unemployment to 29.4 per cent. 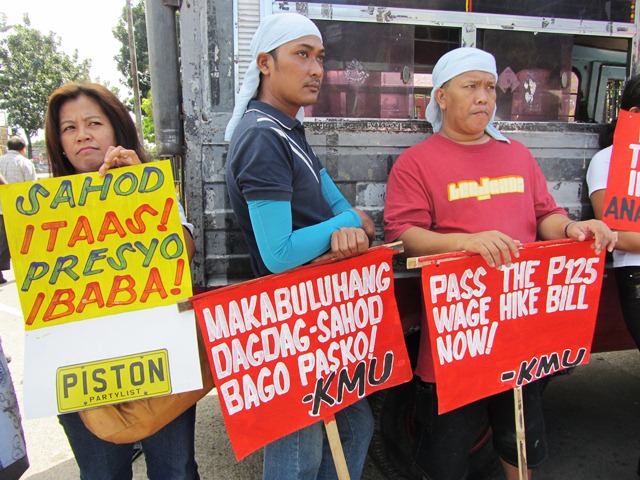 The House committee on labor and and employment had conducted two consultations in Mindanao and Visayas regarding a legislated wage hike. It came from that consultations convinced that, as Rep. Ong himself said early this year, a wage hike looks justified indeed. Rep. Ong announced that the House COLE can do away with a Luzon-wide consultation as it could already prepare a committee report on the bill for transmittal to plenary for deliberations.

But last month, Ong said the Luzon-wide consultation is still necessary. Yet, he failed to arrange for one despite the prodding of labor groups. 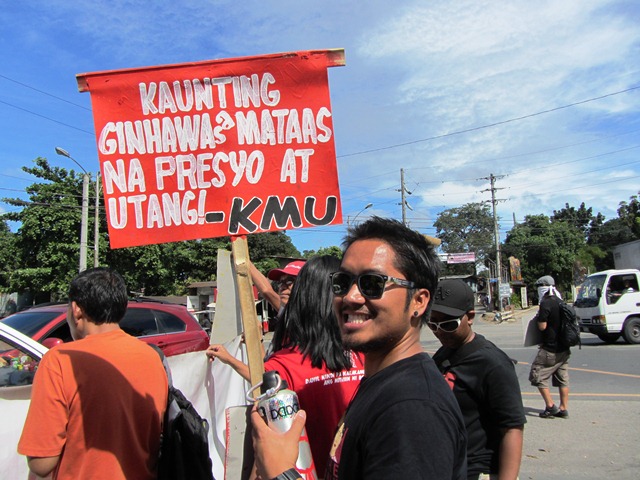 “We know that congressmen will be busy with their electoral campaigns next year,” the KMU said, noting that historically, lawmakers are “productive” only until month of December before an election year. The KMU said that “If the lawmakers wanted to give Filipino workers relief from high prices and years-long dive of their real wages, this month is the time left for the 15th Congress to pass this most important piece of legislation.” 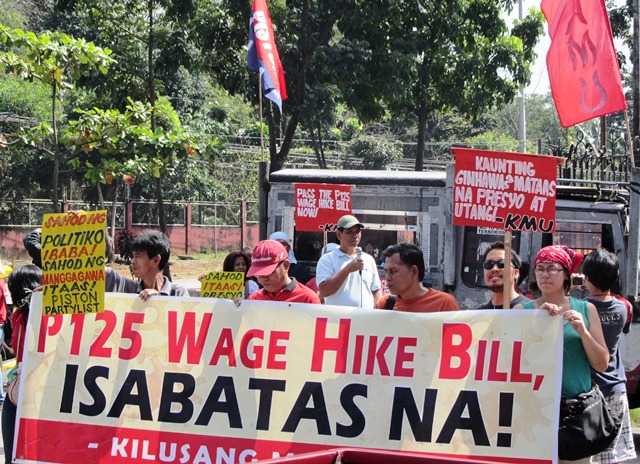 (Text and Photos by MARYA SALAMAT)