State of press freedom: Attacks and threats in 2012

By MELANIE PINLAC
Center for Media Freedom and Responsibility

The failure of the Benigno Aquino III administration to stop the killing of journalists and to speed up the prosecution of cases in court has disappointed journalists, press freedom defenders—and those who have been demanding justice for their slain kin.

Compared to 2011, the number of journalists/media workers killed for their work this year has decreased. CMFR recorded a total of nine killings; four are currently categorized as work related. However, the decrease in the number of work-related killings is hardly worth celebrating in the context of the fact that none of the killings since Aquino came to power have been resolved.

The most recent work-related killing was that of radio broadcaster Julius Cauzo in Cabanatuan City, Nueva Ecija. Cauzo was a commentator for dwJJ 684, a radio station owned by the family of the Cabanatuan City mayor. He was also vice president of the Nueva Ecija Press Club.

Before he was killed, Cauzo had been advocating approval of Cabanatuan’s classification as a highly urbanized city (HUC). Pres. Aquino declared Cabanatuan an HUC in July 2012. The declaration reportedly led to a heated altercation among local politicians. The Commission on Elections (COMELEC) was supposed to hold a plebiscite last Dec. 1, but has postponed it until after the 2013 elections.

A gunman riding on a motorcycle shot Cauzo, who was then on his way to work. Passers-by found him sprawled along Cabanatuan’s Flowerlane street. Cauzo sustained three gunshot wounds in the back. The suspects remain unidentified.

Like in other cases, the motorcycle used by the gunman had no plate number.

Among the work-related murder cases in 2012, only the murder of village chairman and blocktimer Aldion Layao (dxRP, Davao City, April 8 ) has reached the court. The speedy filing of Layao’s case was partly due to his political connections and his widow’s unrelenting effort to seek evidence and testimony to support the prosecution.

Two unidentified men riding in tandem on a motorcycle attacked Layao who was driving home with his cousin and nephew last April 8. The alleged gunman, former barangay tanod Petronilo Demicillo, has been charged at the Davao City Regional Trial Court (RTC) as of April 25. 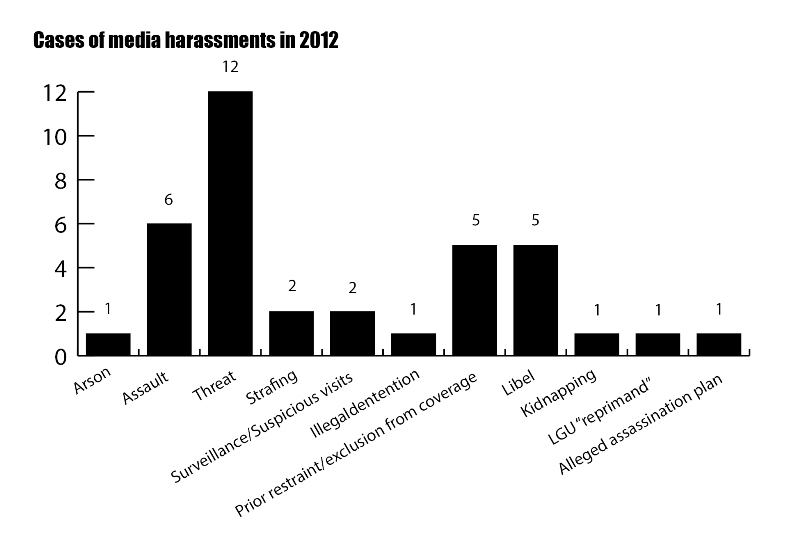 Other cases in 2012 are those of Rommel Palma of dxMC-Bombo Radyo, Koronadal City, April 30; and of Nestor Libaton of dxHM, Davao Oriental, May 8.

The slow pace of the trial of the suspected perpetrators and masterminds of journalist killings continued in 2012, with no conviction during the year. CMFR records show that there have been no convictions in any work-related case since 2009, when Joy Anticamara was convicted of homicide for killing broadcaster Armando “Rachman” Pace. The 2012 decisions on media murders—in the cases of Roger Mariano and Fernando Batul—were acquittals.

Branch 221 of the Quezon City RTC is still hearing the bail petitions of, so far, 58 accused perpetrators including those of five primary accused who are all Ampatuans, in the November 2009 Massacre. A positive development is the arraignment of Zaldy Ampatuan this Dec.12. Zaldy pleaded “not guilty” to 57 counts of murder. The court has yet to consolidate the 58th case—that of Reynaldo Momay—with the first 57 cases.

The murder of broadcaster and environmentalist Gerardo Ortega—the one case during the Aquino administration in which there has been the most progress—is now facing a legal obstacle. The Court of Appeals declared last Nov. 23 that the Justice secretary had erred in ordering a re-investigation of the alleged involvement of former Palawan governor Mario Joel Reyes, Coron town mayor Mario Reyes Jr., and three others in the Ortega slay. Joel Reyes allegedly masterminded the killing of Ortega. The Reyes brothers, a former provincial administrator, and two security personnel are facing murder charges together with the hired gunmen at the RTC Palawan Branch 52.

The case of the killers of broadcaster Romeo Olea has been classified as a cold case, with the police saying they have no leads.

Olea was killed on June 13, 2011 by an unidentified man in Iriga City, Camarines Norte. Olea hosted a public affairs program at dwEB-FM. He was the second dwEB-FM broadcaster killed under the Aquino administration, following Miguel Belen who was killed in July 2010.

The culture of impunity in the cases of media killing is clearly encouraging continuing violence against journalists and media workers in the Philippines. The number of cases of media harassment has also remained high.

Six journalists/media workers were physically assaulted in 2012. These incidents include the case of The Daily Tribune reporter Fernan Angeles. Angeles was covering the Malacañang beat at the time of the incident. The alleged motive was his reporting on the illegal drug trade in Pasig and nearby provinces.

Unidentified men mauled and shot Angeles near his home in Balatiw, Pasig City last March 11. A case has been filed against some suspects at the Pasig RTC. 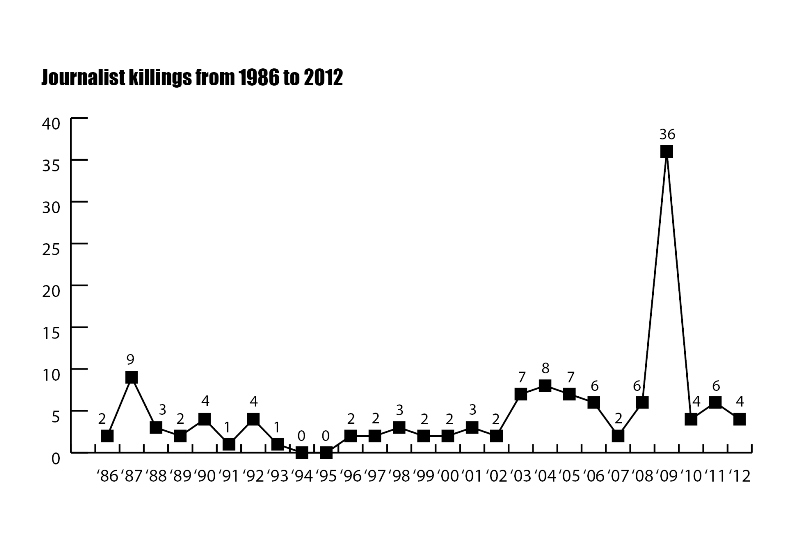 Most of the journalists and media workers killed or assaulted in the Philippines have been from the provincial press. But the Angeles shooting incident was the second work-related case in Metro Manila during Aquino Presidency. The first case in the capital was that of broadcast journalist Marlina “Len” Flores Sumera who was shot and killed in Malabon, a municipality of Metro Manila, March 2011.

Even the victims’ kin have been threatened for actively seeking justice. In October, unidentified men tried to locate the mother of an Ampatuan Massacre victim. Earlier this year, the media also received reports of an assassination plot on the widow of broadcaster Dennis Cuesta.

There were some “victories” this year. But these were paper victories.

A Makati court convicted the gunman in the March 2009 shooting of former chief of reporters and anchor for dxCC-Radio Mindanao Network (RMN) Nilo Labares. However, gunman Bermardo Aguilar had jumped bail and is allegedly freely roaming.

Another “victory” was the 2011 declaration released in 2012 by the United Nations Human Rights Committee (UNHRC) that the Philippine libel law is incompatible with the International Covenant on Civil and Political Rights (ICCPR). The UNHRC said the penalty of imprisonment for libel in the Philippines is “excessive”. But the Philippine government nevertheless passed a Cybercrime Prevention law that strengthens the use of criminal libel against free expression by raising the penalties for libel committed online from six months to four years to four years to 10.

And yet the declaration was the most significant development in the Philippine campaign to decriminalize libel. The UNHRC was responding to broadcaster Alexander “Lex” Adonis’s petition demanding compensation for the two years he spent in prison for his conviction in absentia in a libel complaint filed by then Davao City 1st District and House Speaker Prospero Nograles.

Nograles filed libel complaints against Adonis, then Bombo Radyo station manager Dan Vicente, and the Manila-based tabloid Abante Tonite for publishing reports that Nograles had run naked from a hotel room after the husband of his alleged mistress caught them in bed.

The by now apparent lack of political will to stop the killings and to enhance free expression—in fact the hostility of the Aquino administration to press freedom– has preserved the culture of impunity and perhaps even strengthened it.

In 2010, press freedom advocacy groups and journalists’ associations welcomed the Aquino presidency in the hope that his administration would implement several suggestions on speeding up the investigation of the killings and the prosecution of the killers. They also held him to his campaign promise to support a Freedom of Information (FOI) Act. Two years have passed since then with neither the suggestions being implemented, nor an FOI Act that would enhance rather than restrict access to government-held information in place. (CMFR/ Reposted by