Lucia Francisco: Going against the tide

It is typical for a lower middle class family to strive hard to keep the family afloat and eventually, through the children, get them out of the brink of poverty and hardships. But when Lucy and her family were already at that point, she took a sudden turn in her life.

MANILA — It is typical for a lower middle class family to strive hard to keep the family afloat and eventually, through the children, get them out of the brink of poverty and hardships. The family of Lucia Francisco or Lucy, currently the third nominee of Gabriela Women’s Party in the 2013 party-list elections, is no different.

Lucy, now 55 years old, is the second of six siblings. Her father Elias, who died in 1990, was an electrician at the Panay Electric Company. Her mother is a full time housewife. Their parents struggled hard to put them through school. Lucy was able to finish her studies to become an Associate in Medical Secretarial Science at the Iloilo Doctors College in 1976 through an educational grant obtained by her father. While working in the administration department of the Iloilo Doctors College, she supported herself to pursue further studies, taking up night classes at the University of Iloilo and finished her Bachelor of Science in Commerce degree in 1981.

Her sister is a teacher at the La Paz Elementary School. Her brothers were also able to finish school. The eldest used to work as lineman at the PLDT and is now a contractor for the said company; her other brother is an engineer at Transco; and her youngest brother died of a lung disease.

“It was easy for me to understand the conditions of poor women because we also live in an urban poor community,” Lucy said in Filipino.

But it was not easy for her family to understand her decision. She used to earn a substantial income working with the Iloilo Doctors College then with Fosters Plan, International. Although an NGO, Plan is a global organization with international headquarters in the UK. When she joined Samakana and Gabriela, she had to forego that salary and be a fulltime organizer. It took her family 10 years before they accepted her decision and her mother, brothers and sister are now supportive of the cause she embraced. 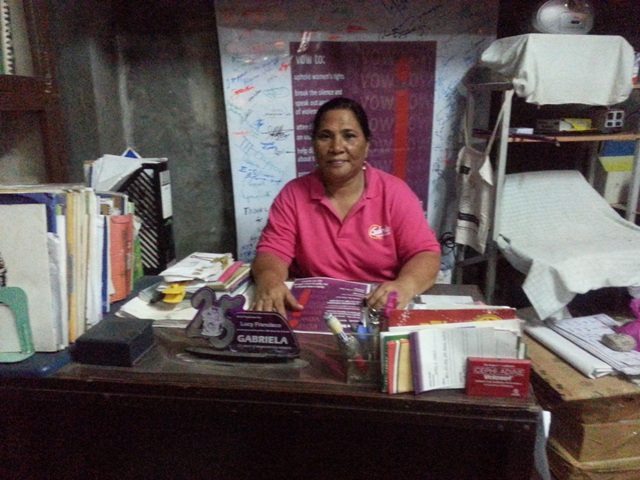 When Lucy joined Gabriela she was asked to start organizing urban poor women from scratch. “I said to myself, where will I begin organizing? Then I decided to go back to the communities I used to organize for Plan International.”

“My previous links with the communities facilitated the process. But it was also quite difficult because I had to explain the shift in my concerns when I approached them. I used to organize them to facilitate the child sponsorship programs of Plan. It was quite easy to get the people’s cooperation because we were bringing in a project that could benefit them.”

“With Samakana, my concern was to make them more aware of their rights as urban poor and as women and to help them form their women’s organization. To be acceptable to the people and to motivate them to get organized, an organizer must be one with the people.“

“I myself had to undergo a transformation. The most superficial of which was in the way I dress up. I used to wear corporate attire and had to shift to T-shirt and jeans. But more importantly, while I do understand the situation of the poor because I come from a poor family, I just accepted it and, together with my siblings, strived hard to lift our family from poverty. “

“It was only after I joined Samakana and Gabriela that I realized that it is not enough to understand the situation of the poor, we should look at the roots of poverty and work toward addressing it, through the struggle for change. We should fight injustices and oppression and work toward building a just, humane, and truly democratic society.”

In pursuing her commitment to working with poor women, Lucy took a sudden turn in her life. And her family expanded. She is no longer working solely to help uplift her immediate family from poverty. She is now working to uplift the conditions of women, especially the poor majority. And she is no longer doing her share by working in an office from 8 to 5. She now spends her time organizing in communities, holding dialogues and negotiations with government officials, and speaking in protest actions.

When she is in the office, she is either in meetings or talking with women victims of violence, counseling them, and helping them out in their legal cases.

“Once, we held a protest action and proceeded to attend a hearing to show support to a woman victim of violence. When the judge saw us, he called the lawyers for the prosecution and the defense to his chamber. ‘Why is Gabriela here? Will they picket my courtroom?’ the judge asked the lawyers. When we were asked, we told the judge that we were there to show our support to the woman victim. Needless to say, the woman victim got a favorable decision in her case.”

Lucy is also Gabriela’s National Vice-Chairwoman for the Visayas.

When asked how she thinks she could be effective in Congress if Gabriela Women’s Party garners enough votes to land her a seat in Congress, Lucy replied, “What is important is not to lose sight of why I am there: to fight for the rights of women, especially the poor majority.”

“Even if I will be primarily based in Manila, if I land a seat in Congress, I will go back regularly to be one with poor women in Iloilo. I feel it is important to be rooted in the masses to know one’s direction and to be effective in proposing legislation that will be to the best interest of the people.”