MANILA – On the occasion of World Consumers Day, an alliance of organizations of farmers, scientists and consumers called on President Benigno Aquino III to shelve plans to make the genetically-modified golden rice available to the local market.

The Philippine Rice Institute (Philrice) has finished the field testing of golden rice in Camarines Sur, Ilocos Norte, Isabela and Nueva Ecija, according to the International Rice Research Institute (IRRI). Golden Rice will be made available to farmers and consumers in the Philippines once the Department of Agriculture-Bureau of Plant Industry approves it.

Members of the Resistance and Solidarity against Agrochemical TNCs (Resist Network), a broad alliance of 55 organizations and institutions that promotes natural and sustainable farming, said that golden rice is but a “public relations product of transnational agrochemical corporations to push for genetically-modified organisms (GMO).” 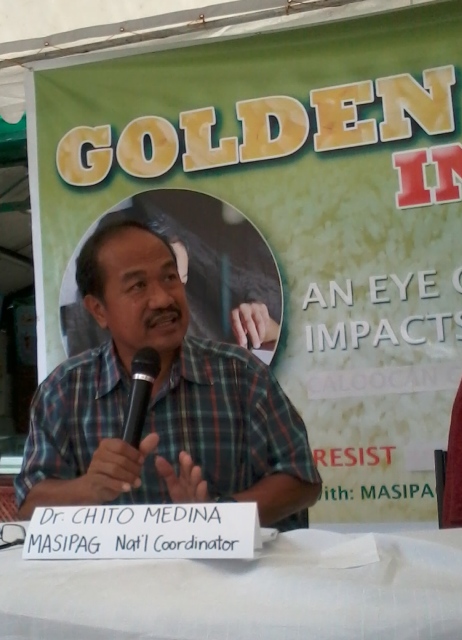 Medina said the golden rice, after more than ten years of research and development, has not been subjected to biosafety test, toxicity studies and molecular characterization.

“Golden rice is a genetically-modified organism, meaning it now has a set of genes that never existed in rice. We have to be extra careful in dealing with GMOs such as golden rice as scientific data from independent scientists have reported unintended compositional alterations associated with genetic transformations,” Medina explained.

Medina said that carotenoids have 200 types, some of which are anti-nutrients or those that prevent the absorption of other nutrients by the body. The IRRI, Medina said, has not made substantial, scientific study on golden rice. “If a study has been made, it has not been made available to the public,” he said.

“It’s a Trojan horse for consumers to accept GMO,” the scientist said.

For her part, Jhana Tejome of the Philippine Network on Food Security Programmes (PNFSP) said Filipinos must not allow their children to be fed with golden rice.

“Do not make guinea pigs out of our children,” Tejome said.

After the government approves the golden rice, efficacy tests will be conducted among the Filipino people.

“Golden rice sends a wrong message on how to address malnutrition and hunger,” Tejome said. “Instead of increasing diversification of food sources, which also provides much needed nutrition, the people are being offered a single crop that addresses only the Vitamin A deficiency.”

Data from the Food and Nutrition Research Institute shows that the incidence of Vitamin A deficiency among children with ages six months to five years old decreased from 40.1 percent in 2003 to 15.2 percdent in 2008. Cases among pregnant women and nursing mothers also dropped in the same period. 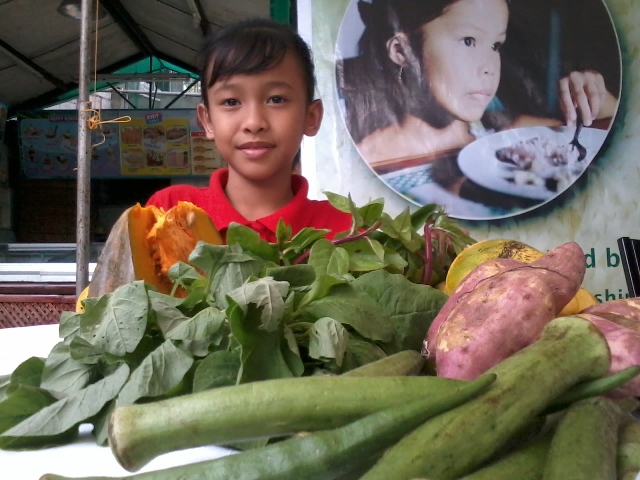 A girl joins call to reject golden rice and says she prefers to eat other sources of Vitamin A.(Photo by Ronalyn V. Olea/ bulatlat.com)

Medina pointed out that vegetables, fruits and food crops containing beta carotene are abundant in the Philippines. Among these are spinach, sweet potato, carrots, papaya, mango and melon.

“We see that golden rice is masking the real problems of malnutrition and will only make it worse,” Tajome said. “Instead of providing a solution to the ever increasing prices of basic commodities, we are being offered with rice with beta carotene as ‘pakonswelo de bobo’ (fool’s offering).”

“We assert our right to safe and adequate food,” Flores said.

Medina criticized the Department of Agriculture for “sending mixed signals to farmers.” “The DA says they are promoting organic agriculture but they also encourage the use of chemicals and GMOs. They should put their act together.”

Flores also said the rice self-sufficiency program of the Aquino government is bound to fail.

“How can we attain rice self sufficiency when in fact there is no concrete plan and program that would carry on the improvement of agricultural productivity?” Flores asked.

The peasant leader said that last year, the DA allotted a measly P452 ($11) each for the country’s 2.7 million rice farmers.

“Worse, the Aquino government only continues the same policies that have kept domestic agriculture backward, low-yielding and labor-intensive,” Flores added.

Medina urged voters to junk candidates who are pro-GMO and support those who stand against GMOs.

“We call on candidates to uphold the rights of consumers to safe food,” he said.

Flores, meanwhile, urged candidates to support genuine agrarian reform and the development of the rice industry.