“The Aquino administration only puts at risk the lives of the people because the US government only wants to position their troops in our country with the objective of waging war against China and North Korea.” — Sheena Duazo, spokesperson for Bayan in Southern Mindanao

By ACE R. MORANDANTE
Reposted by

DAVAO CITY, Philippines – Their series of protests had one clear message. They only want to protect the Filipinos from the risks of war between foreign countries, a war that is not of our own making.
Thus, any form of “arrangement” that would allow the temporary, worse permanent, basing of foreign troops in the country is a big no-no for leftists led by the umbrella organization Bagong Alyansang Makabayan (Bayan).

“The Aquino administration only puts at risk the lives of the people because the US government only wants to position their troops in our country with the objective of waging war against China and North Korea,” said Sheena Duazo, spokesperson for Bayan in Southern Mindanao. 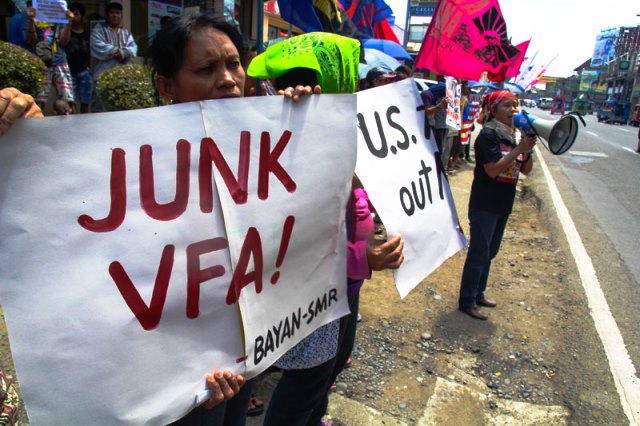 Her statement came at the heels of the government’s proposed “access arrangements,” which seeks to allow foreign troops, from US and Japan in particular, to stay and make use of Philippine facilities for a period of time.

But as to the number of forces and facilities, as well as the length of time — these are all still “undetermined,” Duazo worries.

Earlier, Gabriela Women’s Party Representative Luz Ilagan said that regardless of its name — be it access arrangement, military exercises or routine port calls — it would only mean the same thing: unlimited foreign military basing in the Philippines.

Suazo, on her part, lamented that the historic ousting of US troops and the abolition of military bases 22 years ago through the widespread people’s protests and Senate vote, would only be put to waste should the G.I Joes’ are welcomed back.

On September 16, 1991, the Philippine Senate voted to reject the proposed Treaty of Friendship, Cooperation and Security which would have effectively extended the 1946 US-RP Military agreement for another decade. The Senate acted due to the massive protests against the US bases in Subic Bay.

Meanwhile, Ilagan expressed her apprehension that the conduct of joint military exercises between the US and Philippine troops in disputed areas like the Scarborough “will intensify conflict with China and neighboring countries.”

The access arrangements, she pointed out, will not only violate Constitution and our sovereignty, but would only “create a situation of unpeace, unnecessarily inviting conflict and military hostilities.”

The country would become a magnet of aggression, she said, when territorial conflicts with neighboring countries could be resolved through diplomatic and nonmilitary forms.

Duazo said US government’s long-time plan of making our country the second front in its war of aggression smacks of a “sham friendship.”

She said, there has been no reason, after all, to celebrate “Fil-Am Friendship” considering the many incidents that put our citizens in unfavorable situations versus US troops, recalling for example, the rape against ‘Nicole,’ a woman from Mindanao, by US Marine Lance Corporal Daniel Smith in Subic Bay. 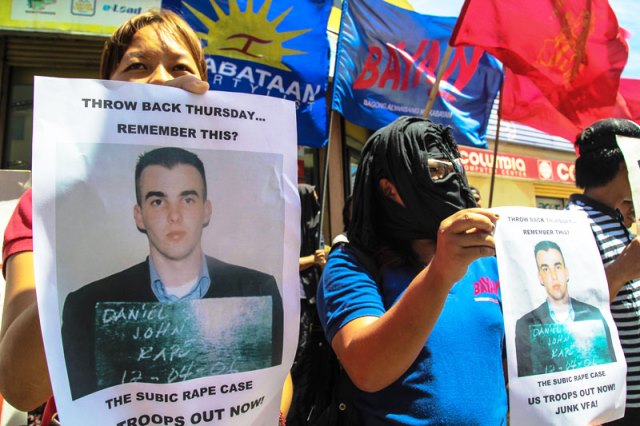 “Those who became victims of rape by US troops, until now, have not achieved justice,” Duazo said.

“It will only result to more human rights violations. Expect more rape, harassment and killings of ordinary people when these foreign soldiers stay here,” said Corazon Espinoza, spokesperson for Samakana.

She pointed out that the Mutual Logistics Support Agreement didn’t even help our Filipino soldiers enhance their capacity to fight against possible foreign enemies and that we have been recipients of refurbished war materiel.

“Contrary to their pronouncements, all the war materiel we get from US are not for free. We have been paying for those,” Espinoza said.

Recalling the presence of US troops in Mindanao, Bayan Muna Representative Carlos Zarate, said it only worsened the security condition in the island.

He said the US troops didn’t thwart the notoriety of the Abu Sayyaf Group and only bolstered kidnapping in areas where the joint military exercises or Balikatan were conducted. 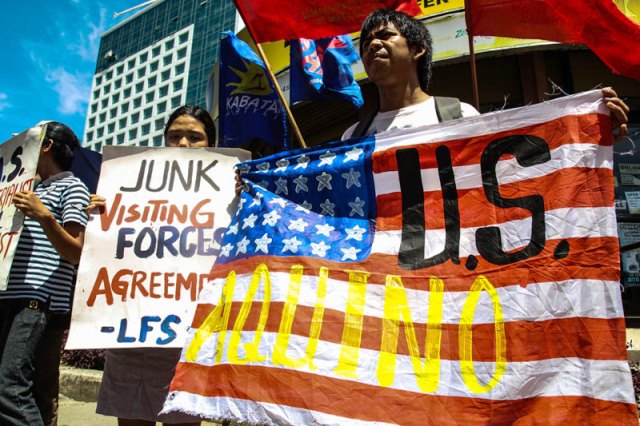 “The people’s rights were disregarded, and the VFA was rendered inutile while the Philippine government covered up the reported human rights violations by US troops in Mindanao,” he said, adding that their presence only bolstered the US government’s “economic supremacy in Southeast Asia” after it has secured ownership rights to oil-rich and mineral-rich areas like the Sulu Sea Basin. (Ace R. Morandante/davaotoday.com)