MANILA – Students, professors, and administrators of the University of the Philippines, Ateneo de Manila University, and Miriam College held a joint protest action Wednesday, Sept. 11, in Katipunan, Quezon City to show their solidarity with nationwide protests against the pork barrel system. 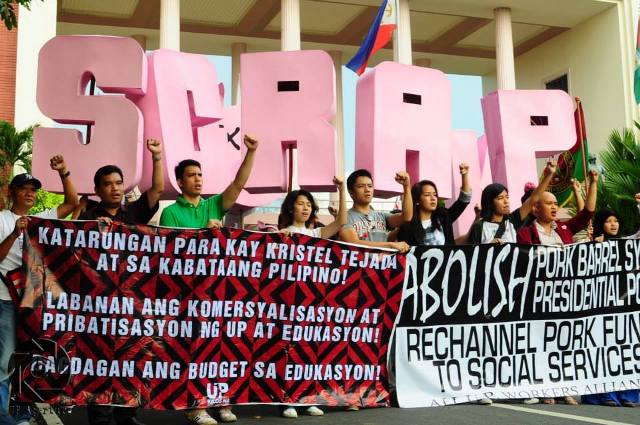 Dubbed as a “Day of Rage vs Pork and Corruption,” different youth and student groups from various schools and communities conducted various protest actions against the pork barrel and corruption led by Youth Act Now against corruption alliance.

Students and faculty members also held their own noise barrages and marches in the campuses of the UP System: Manila, Baguio, LB, Cebu, Miag-ao (Iloilo), Palo (Leyte) and Mindanao (Davao).
In Katipunan Avenue, students, professors and administrators from the three schools joined the noise barrage in the afternoon. 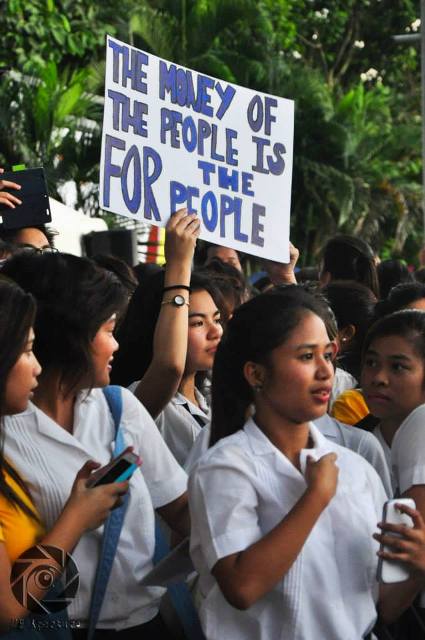 They slammed the Aquino administration for what they called as a “pig-headed” refusal to admit the existence of the P1.4 trillion ($31.871 billion) pork barrel, and “foot-dragging” regarding moves to abolish the Priority Development Assistance Fund (PDAF) and other forms of pork barrel funds.

“It is ridiculous that while Filipino students are very much aware of the existence of the so-called ‘presidential pork’, President Aquino and his cohorts continue to pretend that there is no such thing,” said Krista Melgarejo, University of the Philippines Student Regent, and co-convener of Katipunan Kontra Korapsyon (Katipunan Avenue against Corruption), the alliance of the three schools. 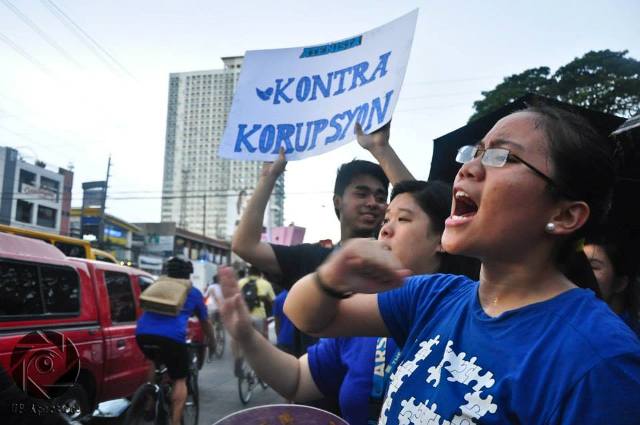 She also expressed disgust at budget cuts which UP and other state universities and colleges (SUCs) are facing next year, saying that there are enough funds for education and other social services if only Aquino would abolish his pork barrel.

According to Melgarejo, UP faces its biggest budget cut in history at P1.4 billion ($31 million). Seventy eight other state universities and colleges will also suffer a similar fate next year. “Aquino has no right to tell students that they should just endure budget cuts when he is sitting on hundreds of billions of pesos” she said. 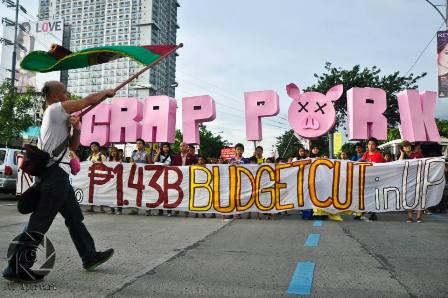 The presidents of the said universities also issued their statement and condemned the “misuse of public funds by unscrupulous government officials and their conniving associates.”

“We stand in unity with a keen desire to end the deeply entrenched culture of graft, corruption and patronage in our political system,” the statement read.

PHOTOS by the UP Aperture