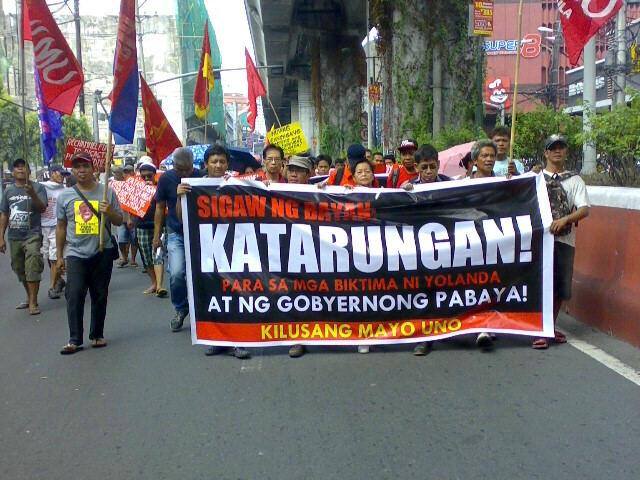 MANILA — With relatives of victims and survivors of Yolanda, workers led by national labor center Kilusang Mayo Uno marched from Avenida Avenue cor. Recto Avenue in Manila to Mendiola this morning to protest what they call Pres. Noynoy Aquino’s “criminal negligence” in handling the supertyphoon.

Despite warnings about Yolanda’s strength, Aquino did not undertake a massive and early evacuation drive, did not build stable evacuation centers beforehand, and refused to immediately send relief goods even after the supertyphoon left the country, the workers’ group said.

They claimed Aquino contented himself with just announcing Yolanda’s strength on national television and bragging about his government’s readiness to face the supertyphoon a day before it hit the country. But they added that Aquino did nothing and left everything in the hands of local government units.

“Aquino is not only the Pork Barrel King, he is also a Disaster President. Let us condemn his criminal negligence in his handling of Yolanda, which has resulted in thousands of deaths and in a humanitarian crisis in the affected provinces,” said Elmer “Bong” Labog, chairman of KMU.

The workers were later joined by members of the Bagong Alyansang Makabayan-National Capital Region, and members of the Leyte-Samar Fraternity of the Philippine Maritime Institute. More relatives of those devastated by the supertyphoon who gathered at Morayta Avenue also joined the protest in Mendiola.

“How would you describe a chief executive’s act of leaving relief and rescue operations for a Signal No. 4 supertyphoon in the hands of local government units of one of the country’s poorest regions? That, for us, is criminal neglect,” Labog said.

The labor leader condemned Aquino’s attempt at putting the blame on the local government of Tacloban City for the delayed relief and rescue operations in the aftermath of the supertyphoon. He added that Aquino “has been consistently politicking in response to Yolanda.”
When Aquino met with local government executives of Tacloban City, he and former running partner (at the presidential polls) and now Local Government Secretary Mar Roxas wore yellow, their party color. Tacloban’s ruling executives are affiliated with rival political parties.

“Aquino’s response shows no concern for fellow Filipinos who were devastated by Yolanda. He has tried to justify his pork and increase US military presence, to promote the candidacy of Mar Roxas, and to attack his political rivals in Tacloban,” Labog noted.

The workers believed that Aquino was only forced to respond later to the unfolding humanitarian crisis in provinces of the Eastern Visayas region because of mounting public outrage as local and international media reported the devastation wreaked by supertyphoon Yolanda.

After the pork barrel issue exposed Aquino as no different from previous presidents, his his mishandling of the repercussions of the Yolanda disaster “has got to be one of the lowest points of the Aquino presidency,” Labog said. The workers’ group reiterated how various groups are now thinking of asking Aquino to resign.

Before Yolanda and before this week’s Supreme Court decision on the unconstitutionality of pork, Aquino’s culpability for impeachment had been publicly raised on account of his government’s handling of pork barrel.