“The projects that the DAR entered into with the NGOs … are not in any way related to energy-development. Worst, those projects were never implemented. Not a single centavo was spent for the said projects and not a single farmer received any benefit therefrom.”

In a 16-page complaint with 70 documentary evidences filed before the Office of the Ombudsman, the Kilusang Magbubukid ng Pilipinas (KMP) said bogus non-government organizations downloaded the said amount from the Department of Agrarian Reform (DAR). 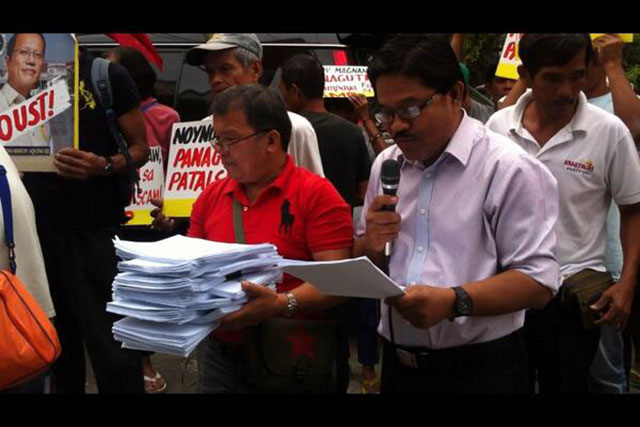 “Allocating hundreds of millions for red wigglers, white worms, and other earthworms is not only preposterous but revolting. Obviously, Aquino and his political lieutenants colluded with fake NGOs to deliberately plunder the Malampaya funds,” KMP chairman Rafael Mariano said.

Not in accordance with the law

Citing Presidential Decree 910, the KMP said Aquino’s approval of the release of the said funds for purposes not related to energy development is tantamount to plunder.

Presidential Decree (P.D.) No. 910 states that the Malampaya Fund was created for the purpose of financing energy resource exploration, development and exploitation programs and projects of government and such other purpose as may be directed by the President. Malampaya Funds” are sourced and collected through the Department of Energy (DOE) from, among others, the government’s share representing royalties and rentals, as well as production share on service contracts and other payments on the exploration, development and exploitation of energy resources.

“The President and respondent public officials of the DBM [Department of Budget and Management] should know and should have known that the Malampaya Funds were earmarked for energy development or energy-related projects. But despite such fact, they approved the release of the funds to the DAR, which is in no way engaged in energy development,” the KMP said in its complaint.

The KMP branded Abad and Budget Undersecretary Mario Relampagos “as principals by indispensable cooperation as they are the ones who approved the release of the funds to the DAR for projects not related to energy-development.”

The KMP said Abad and Relampagos “allowed the release of such funds for those projects when the projects were highly anomalous and do not conform to the government procurement system.”

“Had the DBM, which has the primary duty to manage public funds and their disbursement, not been remiss in its duty of monitoring the disbursement, then the scam with its magnitude could not have transpired. Thus, those DBM officials are principal by indispensable cooperation to the offenses hereto charged,” the complaint said.

“Worst, the project proponents were using the predicament of the hapless farmers and their miserable situation as justification for the release of the public funds they have squandered,” the KMP said.

“The projects that the DAR entered into with the NGOs … are not in any way related to energy-development. Worst, those projects were never implemented. Not a single centavo was spent for the said projects and not a single farmer received any benefit therefrom,” the complaint said.

Mariano said further that “this plunder complaint will show that under the Aquino regime, the DAR is not only a conduit of big landlords, like the Cojuangcos, in strengthening their control over vast haciendas but a conduit in plundering the nation’s coffers.”

The KMP urged the Ombudsman to immediately place the respondents in preventive suspension saying “the charges against them constitute grave criminal offenses involving graft and corruption and for grave and serious misconduct which would warrant dismissal from service.”

“The evidence of guilt against them is also strong. More importantly, their continued stay in office will definitely prejudice this case because they have access to the files and records and could easily alter or forge them,” the complaint said.

In a statement, Anakpawis Rep. Fernando Hicap expressed support to the farmers. ”This only shows that corruption persisted and even worsened under the Aquino administration.”

“The public must continue to seek truth and justice on the pork barrel scam and other corruption cases,” Hicap said.

The complaint is the second plunder case filed by KMP against Aquino. In October last year, the group filed the first case against Aquino and Department of Agriculture officials for the use of public funds by bogus NGOs.