“By extending the reach of the antediluvian libel law into cyberspace, the Supreme Court has suddenly made a once infinite venue for expression into an arena of fear, a hunting ground for the petty and vindictive, the criminal and autocratic.” — NUJP

MANILA – To commemorate the 28th Edsa People Power I uprising, netizens, journalists, students and other petitioners trooped to the Edsa Shrine Feb. 25 to protest what they dubbed as electronic martial law.

Wearing black, the protesters denounced the Cybercrime Prevention Act of 2012 or Republic Act 10175 as a threat to internet freedom, freedom of expression and free press.

Online, netizens changed their DPs and profile pictures in social media to black. Many others posted and shared memes. Several government websites were hacked.

Dubbed as the Black Tuesday, the protest is the first after the Supreme Court issued its ruling on the Cybercrime Prevention Act. 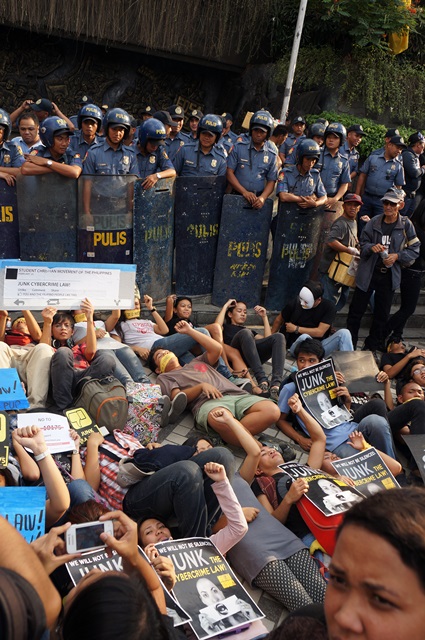 Journalists and netizens are not convinced with President Benigno Aquino III’s defense of online libel. “…But I repeat, if you are saying the truth, why would you fear libel?” Aquino was quoted as saying in a report.

Rupert Mangilit, secretary general of the National Union of Journalists of the Philippines (NUJP), read the statement of media organization.

“By extending the reach of the antediluvian libel law into cyberspace, the Supreme Court has suddenly made a once infinite venue for expression into an arena of fear, a hunting ground for the petty and vindictive, the criminal and autocratic,” Mangilit said.

Speaking at the Edsa Shrine, Ilang-Ilang Quijano of alternative media outfit Pinoy Weekly said the truth is not a defense in a libel case. She related how she and her father Dr. Romeo Quijano were sued by an agro-industrial corporation for a story about the impact of poisonous pesticides to farmers and their families in a community in Davao del Sur.

Varona, now campaigns director of petition platform, Change.org said the right to free expression is one of the fundamental rights. “Restricting this right would open up for other abuses,” Varona said.

Vencer Crisostomo, chairman of youth group Anakbayan, condemned the police deployment at the EDSA Shrine. He said that with Cybercrime Law, “only Aquino has the freedom to repress the people’s rights.”

“Upholding the constitutionality of cyberlibel is a deathblow to Internet freedom. Now, not only journalists but common netizens can be targets of harassment and intimidation through trumped up charges filed by government instrumentalities,” Crisostomo said.

A representative of the Anonymous Philippines spoke at the EDSA Shrine. Wearing the V-for-Vendetta mask, he said in Filipino, “The Cybercrime Act kills our freedom of speech.”

The Anonymous Philippines has been known for defacing government websites. “We are angry at corruption in government,” the group’s representative said.

The youth group expressed concerns over the approval of Section 6 in RA 10175 that imposes higher penalties for crimes committed using information and communications technology (ICT), as well as Section 15, which allows the search, seizure, and destruction of computer data.

Kabataan Partylist Rep. Terry Ridon, lawyer for youth and student petitioners against RA 10175, explained the ramifications of Section 6. “Take the case of rebellion. The Revised Penal Code imposes 12 to 20 year imprisonment for people participating in a rebellion or insurrection. But with Section 6 of the Cybercrime Law, those who are accused and convicted of participating in online rebellion may get 30 to 40 years of imprisonment,” he explained.

RA 10175 also states that upon the expiration of the period provided, computer data subject to preservation and examination shall be destroyed.

“This is a dangerous provision that allows the taking and destruction of private property without a determination whether such property are proceeds or instruments or related to a criminal act to merit continuing seizure and eventual destruction,” Ridon said.

“Without qualification, all computer data that had been subject to preservation and examination orders may be summarily destroyed instead of being returned to the owners, regardless of whether such computer data are not proceeds, instruments or related to a criminal act,” Ridon added.

Kabataan party-list has a petition against the cybercrime law on Change.org with 80,000 signers.

Crisostomo said the Cybercrime Law might be used as a tool against political dissent.

“The Aquino administration has already been unmasked as a corrupt and inept administration. From its failure to provide immediate relief and rehabilitation to the way the government is currently mired in corruption scandals, Aquino and his cohorts may find a potent tool in the Cybercrime Law to eliminate critics and stifle growing discontent,” Crisostomo said.

The protesters ended the program by lighting candles.