Renato Mendoza, a leader of the Alyansa ng Magbubukid sa Asyenda Luisita has but one message for President Aquino: “Order your family to stop grabbing our land.”

MANILA – Three farmers of Hacienda Luisita were arrested at around 2 p.m. today by elements of the Tarlac City police.

As of press time, Ambala identified Romeo Corpuz, Marcelino Lugay and Pia Hernandez as among those arrested. They are among those who attempted to stop the security guards of the Tarlac Development Corporation (Tadeco) from fencing off a 104-hectare agricultural land in Cutcut village.

Tadeco, a company owned by the family of President Benigno Simeon Cojuangco Aquino III, is claiming ownership over thousands of hectares of prime land in Hacienda Luisita despite a April 24, 2012 Supreme Court decision ordering the distribution of all agricultural lands to farmworker-beneficiaries.

In a phone interview with Bulatlat.com, Renato Mendoza, 43, a leader of the Alyansa ng Magbubukid sa Asyenda Luisita (Ambala), said they were only defending the farm lots they have been tilling since 2005.

The area in Cutcut village, just like the 258-hectare land in Balete village fenced off by Tadeco, is covered by the agrarian reform program. A notice of coverage on the disputed land was issued by the Department of Agrarian Reform (DAR) on December 17, 2013. 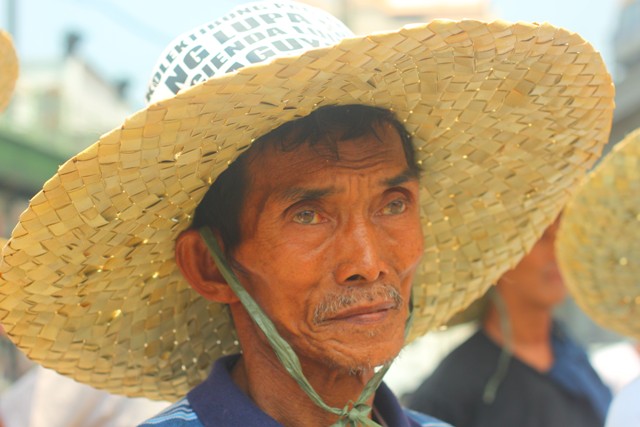 Mendoza said some 20 security guards hit them with hammers and shovels. Some 23 policemen, including members of the Special Weapons and Tactics (Swat) unit and ten soldiers from the Philippine Army’s 3rd Mechanized Battalion were at the place of incident while the farmers were being beaten up.

Farmer Jerry Mesa, who was hit by a hammer on his head, was brought to the provincial hospital for treatment. Mendoza himself suffered injuries on his right shoulder and on left side of his body.

The Unyon ng Manggagawa sa Agrikultura (Uma), of which Ambala is a member, identified police officers P/Insp. Galicia, SPO3 Balot, SPO3 Garcia, SPO1 Abella & PO2 Bernardo as among those who arrested the farmers.

Mendoza said that as of press time, Tadeco security guards and policemen are roaming the villages, hunting down Ambala leaders.

On March 25, another farmer, Rudy Corpuz, 59, brother of one of those arrested today, was hit on the head by a certain Faustino Corpuz (not related to Rudy), a worker contracted by Tadeco to set up markers on the disputed property.

In a statement, Christopher Garcia, Ambala spokesman lamented that “The Notice of Coverage issued by the DAR on the hundreds of hectares of land in barangays Balete and Cutcut is just a scrap of paper. It does not prevent landlords with the aid of private and government security forces from illegally evicting farm workers who have been tilling the lands since 2005.”

The DAR has not been acting on the petition for issuance of cease-and-desist order against Tadeco filed by farmers in December 2013.

“The DAR should stop calling us farmworker ‘beneficiaries.’ Until now, Hacienda Luisita is controlled by the Cojuangco-Aquino family,” Florida Sibayan, Ambala chairwoman, said. “What are the benefits of land reform under a Cojuangco-Aquino president? All we have in Hacienda Luisita is sham land distribution, landgrabbing, deceit, and a climate of terror and impunity.”

In a statement, Anakpawis partylist said President Aquino and the DAR should be blamed for the violence in Hacienda Luisita.

“Anakpawis condemns in the highest degree these brazen and criminal acts of the Aquino-Cojuangco clan against farm workers of Hacienda Luisita. This animosity of Aquino and his relatives reveals that they are hell-bent in preserving their hold in Hacienda Luisita,”Anakpawis party-list representative Fernando Hicap said.

‘”For decades, the presidents’ family has been consistent law breakers resulting in years of legal struggle for Luisita’s ownership. Despite the court’s unanimous decision to award Luisita to the farm workers, it continues to twist the law using Pres. Aquino’s position and DAR to justify its land grabbing escapade,” Hicap added.

Mendoza has but one message for President Aquino, “Order your family to stop grabbing our land.”