“This award is for everybody who partook in the process—from the generous and hardworking people from the creative community, to the oppressed urban poor whose continuing fight fuels Carmen Deunida’s fire. I am only a very small part of a big picture and I am proud to be.” – Adjani Arumpac, director

MANILA – A film on the life of Carmen “Nanay Mameng” Deunida was judged this year’s best documentary film by the prestigious Gawad Urian.

Produced by Kodao Productions and directed by Adjani Arumpac, the documentary presents how Deunida, chairman emeritus of urban poor organization Kalipunan ng Damayang Mahihirap (Kadamay), struggled against poverty from childhood up to this day. It was released in October 2012.

In an interview with Bulatlat.com, Jola Diones-Mamangun, executive producer of Kodao Productions, said Deunida’s life reflects how poverty persists throughout the decades. “This is the truth that the film portrays,” Mamangun said. “We think this is the strength of the documentary.”

Arumpac, a freelance filmmaker, explained why she agreed to do the film. “The discourse on politics and power and the oppression of the masses abound in books but Nanay Mameng, who lived and continues to live through it, can easily and eloquently put the pain of struggle with very simple words. This is her power—her truth shaped by living her life, which she shares with the rest of the common Filipino people. Her life story must be told because it is a reality that must be confronted and not just accepted. Her struggle must be shown and shared because it gives hope that despite everything, one can opt not to give up and accept an unjust system. One can grow up and grow old and still believe that change for the best is possible.” 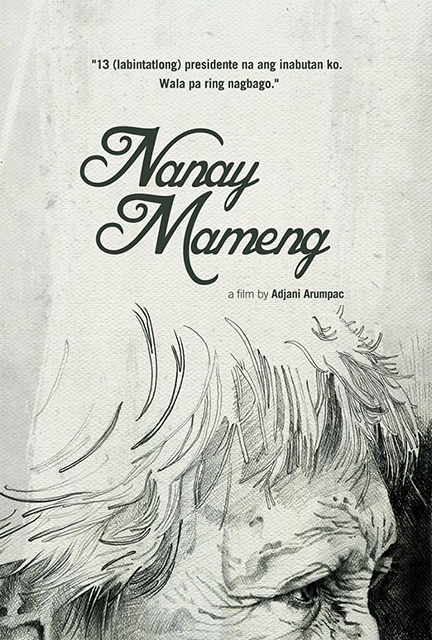 Arumpac said Deunida debunked the adage, “Idealism is a function of the youth.”

“Growing up and growing old, I have seen so many succumb to world-weary disillusionments, to compromising beliefs, to watering down passions in favor of survival. Meeting Carmen ‘Nanay Mameng’ Deunida debunked that notion. Nanay Mameng is a force of nature at 85 years of age. Hard life has not put a dent on her fiery outlook. Nanay Mameng believes that the Philippine government has relentlessly betrayed its people by favoring the rich and the powerful,” Arumpac said.

Arumpac was not able to receive the award. At that time, she was attending a human rights film festival in Myanmar. Deunida, Arumpac’s husband Julius Matibag and Bonifacio Ilagan, creative consultant of Kodao Productions, received the trophy.

In her acceptance speech, Deunida said she did not want to be popular but only wanted to continue fighting for the Filipino people.

Arumpac said it took her two years to shoot and another year for the post-production of “Nanay Mameng.”

She thanked friends and comrades who lent them their equipment, time and talent to finish this film.

Jedd Dumaguina and Angelo Jamilano from Monoxide Works worked on the sound mixing and color grading. Roselle Pineda and Leo Isais performed the theme song “Alamat” that was written by Ericson Acosta. John Marc Diego aka Tala composed music and lent available music tracks. The poster was made by Tomas Estrera III.

“I consider winning the best documentary award in the 37th Gawad Urian the best form of recognition for everybody who helped with no expectations of return, who worked because they believed in Nanay Mameng, the octogenarian activist, and what she fights for. This award is for everybody who partook in the process—from the generous and hardworking people from the creative community, to the oppressed urban poor whose continuing fight fuels Carmen Deunida’s fire. I am only a very small part of a big picture and I am proud to be,” Arumpac said.

For its part, the Kodao Productions said it is grateful to Arumpac for her exemplary work and to all the friends who helped in completing the project.

“We are grateful to Kadamay for assisting us throughout the production stage. Most of all, we are grateful to Carmen ‘Nanay Mameng’ Deunida who continues to inspire us to tell stories about the urban poor and their struggles truthfully and compassionately,” the independent multimedia group told Bulatlat.com in an interview.

Arumpac said the film has not been screened widely.

It was first screened during a tribute to Deunida in October 2012. After that, it has been screened in various universities through Cinemaralita, a film festival featuring a broad spectrum of films that highlight the lives and struggles of the Philippine urban poor; in Cinema is Incomplete, an alternative screening space initiative; and at the 2013 Bangkok ASEAN Art & Culture Festival.

The proceeds of the screenings were used to fund Deunida’s medical bills.

“It has been a struggle to look for available screening spaces for Nanay Mameng due to the nature of its content and due to lack of access to bigger distribution channels,” Arumpac said.

Arumpac said she is glad that the Film Critics of the Philippines gave a nod to Nanay Mameng because it recognizes the effort of small documentary filmmaking groups who strive to create despite the lack of resources.

“There are so many stories that one can document in the Philippines. The messages may vary but it is important that the work comes across to educate, enlighten and empower its target audience,” she said.

Arumpac said she sees no reason why production and promotion of socially relevant films should not flourish. “This is not the start because so many progressive media groups—such as Kodao Productions, Mayday Multimedia, Southern Tagalog Exposure, Tudla Productions and many others—have been producing beautiful and brutal films documenting various human rights issues over the past decade. But this is a much-needed push and validation. These unadulterated stories—as told by the marginalized/oppressed/common people and not reported by corporate mediators who have their own agenda—deserve to be known by the greater population.”