You Are Here: Home → 2014 → July → 27 → Anything but yellow on SONA as disillusionment with Aquino increases

Anything but yellow on SONA as disillusionment with Aquino increases

“The devil, or the evil of DAP, is in the details. It cannot be found in lump sum allocations that Abad is peddling to the public.”– Bayan Muna Rep. Neri Colmenares

MANILA — “We are hanging red, blue and white ribbons, colors of the Philippine flag, to remind the Filipino people that, foremost, our loyalty is to ensure the welfare of the Filipino people. This is to defy the call of Malacañang to wear yellow ribbon,” said Rev. Sol Villalon, convener of Church People’s Alliance Against Pork Barrel (CPAPB) yesterday, two days before the president delivers his fifth State of the Nation Address. 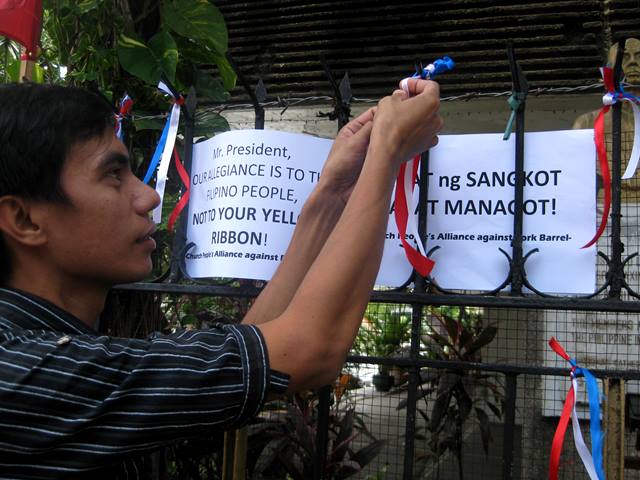 The red, white and blue ribbons follow the black ribbon campaign initiated by government employees including court employees and teachers. It followed the series of Malacañang tirades against the Supreme Court after it struck down as unconstitutional the salient points of the Disbursement Acceleration Program (DAP), source of one of President Aquino’s hefty pork.

Aquino has the biggest pork of all, or biggest lump sum appropriations in the budget in which only he has discretion on where to spend. DAP is just one of it, and it has been declared unconstitutional by the Supreme Court, but Aquino is challenging the SC decision.

Against Aquino’s call to his supporters to wear yellow ribbons, black ribbons as armbands started adorning the uniforms of public sector employees in protest also of how through DAP, the savings in the budget which, by law, government employees should have received as benefits, were instead taken away from them by Malacañang. “President Aquino keeps telling us there is not enough government funds to cover for teachers’ salary hike while he gives millions and billions of funds to his friends, party mates and relatives,” said France Castro, secretary-general of Alliance of Concerned Teachers. The teachers’ salary is only almost half of the government-declared family living wage of P1,054 ($81.41) per day or P31,620 ($2442.17) a month.

As with other government employees, public school teachers bore the brunt of President Aquino’s alleged malversation – and as such, the people they serve. According to Castro of ACT, “Aquino’s budget secretary, Florencio “Butch” Abad, designed the illegal DAP which resulted in the systemic deduction of our meager benefits which is supposedly given to augment our very small salary.”

Since President Aquino assumed office, teachers received nothing from him aside from lesser benefits and more headaches, Castro said. She explained that through the DAP, the budget for their yearly Performance Enhancement Incentive (PEI) from P10,000 ($772) was cut by half. Their Productivity Incentive Bonus (PIB) and allocation for substitute teachers were taken away. Because of all these, whenever a teacher is on maternity/paternity leave or sick leave, his/her teaching load was just distributed among the teachers instead of hiring a substitute teacher. It thus further burdened the already overworked teachers, said Castro.

Since Aquino took power until 2013, over half (62 percent) of what it declared as “savings” came from “unreleased personnel services”, the budget allocated by GAA for various government employees. At P145.972 billion ($11.28 B), it is a billion more than the total released funds under DAP, which, Abad said, amounted to P144 billion ($11.122 B).

Abad could not say if the P145.972 billion ($11.28 B) total “savings” arising from unreleased personnel services had funded the P144 billion ($11.122 B) released DAP-funded projects of the executive’s choosing. “We just pulled savings, I can’t answer which items in savings go to what,” Abad told the Senate.

The Aquino government declared “savings” as early as the first quarter of the year, or, according to Abad, when they determined that the agency concerned could not “obligate” or use the budget as planned under GAA, because of “unforeseen needs.”

Every year, not only teachers, but health workers also, are up in arms against budget cuts that they said severely crimp their ability to provide the people with affordable health services. They have demanded year in and year out an increase in the budget for MOOE (Maintenance, Operating, and Other Expenses), decrying the successive cutbacks, but, according to Abad, since Aquino took power until 2013, a total of P46 billion ($3.6 B) from MOOE overhead have also been declared as “savings”.

In defending DAP, Abad has inadvertently confirmed there were more “savings” that escape public scrutiny and Congress’ oversight. The administration apparently has P93 billion ($3.6 B) more of what Abad calls as “generic savings,” aside from DAP.

“Sec. Abad has still failed to disclose where the DAP funds specifically came from, and where the people’s money were specifically spent,” said Bayan Muna Rep. Neri Colmenares in a statement.

“The devil, or the evil of DAP, is in the details. It cannot be found in lump sum allocations that Abad is peddling to the public,” Colmenares added.

During the Senate hearing on DAP which turned into “a venue to deoderize the illegal and unconstitutional presidential pork barrel,” according to Colmenares, just a few senators dug into details. Sen. Nancy Binay, one of the few who did, noted questionable practices of shelving GAA-listed projects to the detriment of the public, like in the NAIA rehabilitation including its toilets. Her questioning also found a discrepancy between data in the budget department’s website and data Abad told the senators at the hearing.

Sen. Binay expressed fears during the hearing that it is becoming the discretion of DBM to give or not to give funds, following a discussion of the DAP-funded PCOS machines for the 2013 elections.

Even Sen. Ralph Recto, who started his questioning with a supportive statement for Abad and Aquino, commented that the DBM decision to give Bangko Sentral ng Pilipinas P30-billion ($2.32 B) plus from DAP in effect bypassed Congress as other ways to achieve DBM-stated aims could have been discussed with them first.

“The main issue in DAP is not only its accounting but accountability as well. We cannot allow a system which allows only one person to decide the trillion peso budget of the entire country as this would lead to corruption and abuse,” says Bayan Muna Rep. Colmenares.

Despite the defense of DAP in the Senate hearing, Colmenares said the truth is now out – “Pres. Aquino’s and Abad’s DAP is illegal and unconstitutional and is morally wrong as it turned hundreds of billions of funds into one huge presidential pork.”

In the SC decision on DAP, the high court said, “Unreleased appropriations and withdrawn unobligated allotments under the DAP were not savings, and the use of such appropriations contravened Section 25(5), Article VI of the 1987 Constitution.”

Echoing the position of various peoples’ organization, Colmenares said the DAP authors, proponents and chief implementors, President Aquino and Secretary Abad, must be held accountable and removed from office for having committed culpable violation of the Constitution and betrayal of public trust.

Three impeachment raps against Pres. Aquino were filed the week before his fifth SONA, prompting peach-colored ribbon campaigns spearheaded by youth and student organizations. Kabataan Partylist Rep. Ridon, who supported the impeachment raps, also filed this week with Youth Act Now a supplemental complaint in the Office of the Ombudsman against Sec. Abad, to add 116 counts of technical malversation to the charge of plunder that they have filed a few weeks ago.

In a forum led by the Integrated Bar of the Philippines (IBP) Jul 23, its national president, Vicente M. Joyas, also told the media there are in fact grounds to impeach President Aquino for culpable violation and betrayal of public trust. The IBP will not file an impeachment complaint (they may file instead a motion for indirect contempt), but according to Joyas, they support the impeachment complaints lodged against Aquino.