Sectors see all lies and doom in Aquino’s SONA

“Aquino needs only to look at his own backyard, at the farmers of Hacienda Luisita, to know that things have not changed.” – Renato Reyes, Bayan

In his SONA, Aquino boasted that the 27.9 percent poverty rate during the first semester of 2012 went down to 24.9 percent for the same period in 2013. This, he said, is equivalent to 2.5 million Filipinos who have crossed the poverty line.

“It seems Aquino was high on drugs when he spoke,” Arellano said in a press conference, July 29. The urban poor leader, citing estimates of independent think-tank Ibon Foundation, said that 56 million families are living below P100 per day and 23.7 million families are experiencing hunger. 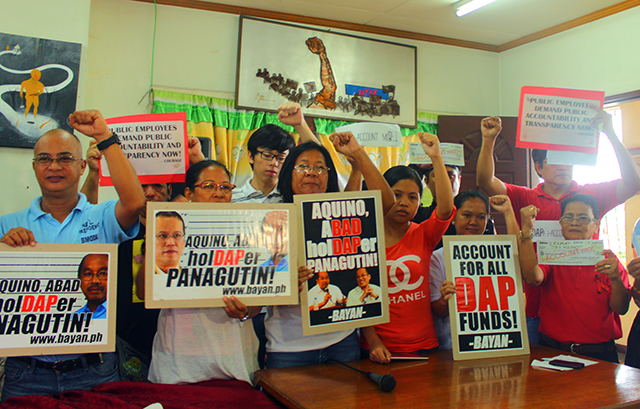 Renato Reyes Jr., said the President insulted the intelligence of millions of Filipinos now reeling from poverty and record unemployment. “Aquino needs only to look at his own backyard, at the farmers of Hacienda Luisita, to know that things have not changed.”

In an email interview, Jose Enrique Africa, executive director of independent think-tank Ibon Foundation, noted that Aquino used incomplete data for employment and poverty to give the impression of a turnaround in the conditions of the majority. Africa deemed that the president exaggerated gains against joblessness and poverty to divert from the exclusionary growth path of economic policies.

Aquino said in his SONA, “Our economy and our country are indeed taking off, and we are already realizing even greater aspirations.”

Raymond Palatino, secretary general of Bagong Alyansang Makabayan (Bayan)-National Capital Region, said these words were similar to former President Gloria Macapagal-Arroyo’s SONA in 2005. “How could the economy take off when Aquino is implementing the same economic policies as Arroyo’s?” Palatino asked.

In his SONA, Aquino boasted of government’s efforts to provide relief and rehabilitation for disaster-affected areas. He said that within 24 hours after Yolanda (international name Haiyan), the government was able to deliver relief aid. Aquino said that in only two weeks, one million food packs were distributed to the victims.

In a phone interview with Bulatlat.com, Dr. Elflida Bautista, spokeswoman of People Surge, an organization of Yolanda survivors, said Aquino’s statements were all lies.

“We, the victims, have not felt the response of the national government,” Bautista, who lives in Tacloban City, said.

Bautista said relief goods reached the affected families in December, consisting of only a few kilos of rice, sardines and noodles. She said it was only in April that the government started its survey of the affected families. She added that one village in Tacloban only received relief goods eight months after the storm. “How much more for families in far-flung areas?” she said.

Bautista said farmers from Western Samar held a protest outside the regional office of the Department of Social Welfare and Development (DSWD) just last month to demand for relief goods. Bautista said the farmers were told that they were not covered by the 50-kilometer radius of Yolanda and thus, could only receive minimum aid equivalent to five kilos of rice.

Aquino said that by November 22, over 35,000 cubic meters of debris were cleared and 3,426 kilometers of National Roads were already passable. He added that by Christmas Day of 2013, all municipalities affected by the calamity had been electrified.

Bautista said these were not at all true. She said the people of Tacloban spent Christmas in darkness and only few had electricity from generators. By January this year, Bautista said, only the primary lines were restored. To this day, she said, less than 50 percent of the region has been electrified.

Aquino boasted that this July, 221,897 jobs were created and the government paid salaries for those who participated in the cash for work program.

Bautista said foundations, nongovernment organizations and international aid agencies facilitated most of the cash for work programs. The one ran by the DSWD only paid P260 per day for a maximum of ten days of work and a family could apply for this program only once, according to Bautista.

Up to this moment, Bautista said, Yolanda survivors need much help. Thousands remain in tent cities. She said what the people need are permanent housing and resilient evacuation centers during typhoons.

A group of nationalist scientists, Agham, lamented that Aquino used the Project Noah again to defend the controversial Disbursement Acceleration Program (DAP). A total of P1.5 billion of DAP was used for the weather forecasting equipment.

Feny Cosico of Agham (not the partylist group) said the budget for disaster preparedness should have been included in the budget of the Department of Science and Technology (DOST) under the General Appropriations Act.

Cosico said this year, only P12 billion was allotted for DOST or a mere 0.1 percent of the gross domestic product (GDP). She said that the Unesco prescribes that every country should allocate one percent of its GDP for science and technology.

Ibon Foundation’s Africa said Aquino’s SONA affirmed the administrations reliance on short-term measures to boost growth for the illusion of economic progress — primarily public infrastructure spending — and its avoidance of addressing the structural bottlenecks that cause underdevelopment.

For some sectors, this spells doom.

Arellano of Kadamay said the infrastructure projects, which has a budget of P404.3 billion this 2014, would surely result in more violent demolitions of urban poor communities.

Pya Malayao, secretary general of Kalipunan ng mga Katutubong Mamamayan ng Pilipinas (Kamp), said the rehabilitation and construction of dams would displace thousands of indigenous peoples from their ancestral lands. Malayao said the Laiban dam will drive away 10,000 Dumagat and Remontado families in Rizal and Quezon while the Jalaur dam project will displace 18,000 Tumandok families in Panay.

“Aquino’s statement that the country is ‘open for business’ means dislocation and militarization of indigenous people’s communities and plunder of our resources by foreign investors,” Malayao said.

Aquino said that apart from fostering an improved business climate, his administration is also pursuing better relations between labor and management. He cited data from the National Conciliation and Mediation Board, which states that since 2010, the number of strikes per year has been limited to less than ten.

Looking at Labor Secretary Rosalinda Baldoz, Aquino said, “Linda, in 2014, a half-strike won’t do. Maybe we can strive for no strikes?”

This statement, according to Elmer Labog, KMU chairman, constitutes a veil threat against the right of workers to strike.

Labog said authorities have always been defending the interest of employers during strikes and in export processing zones, policemen serve as security guards of multinational corporations.

Meanwhile, human rights alliance Karapatan, expressed disgust over the allocation of huge funds for the modernization of the Armed Forces of the Philippines (AFP).

Cristina Palabay, Karapatan secretary general, said she is certain the AFP modernization is not being used against China but for counterinsurgency operations. “More human rights violations are expected as an outcome of this AFP modernization,” she said.

Palabay added that Aquino’s boasting of the arrest of Benito Tiamzon and Wilma Austria, whom he tagged as chairman and secretary general of the New People’s Army (NPA), bodes ill for the peace talks. Palabay said the two, being consultants of the National Democratic Front of the Philippines (NDFP), are supposedly immune from arrest, detention and other forms of harassment as provided for by the Joint Agreement on Safety and Immunity Guarantees (Jasig).