DAVAO CITY – Filipino-American delegates to the recent International Solidarity Mission in Mindanao were “dismayed” with Philippine government over what they observed as “its negligence to attend to the basic social services of its people”.

In a press conference, Nikki Caintic of Anakbayan Seattle and Kapit Bisig Kabataan Network (KBKN, a relief network group) said that even the “enormous military presence in the region doesn’t serve and protect the people; rather it defends the interest of the corporations that are endangering the environment.” 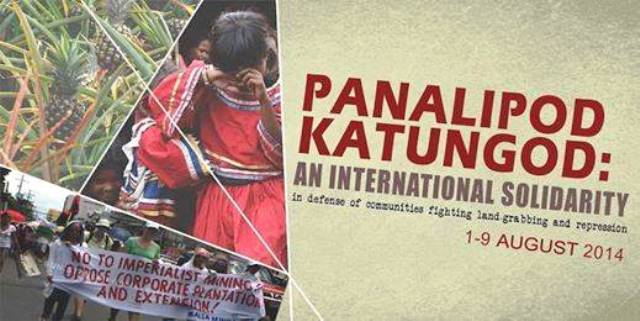 Caintic said she immersed in the communities in Soccsksargen, said that the presence of the military has “led to cases of human rights violations and economic hardship to the people”.

“Communities do not feel safe in their homes as their militaries linger close by. The people are silenced from speaking up against any HRVs,” she added.

The group of Caintic, together with the KBKN and the North America-Philippines Solidarity Affair (NAPSA), conducted a relief mission in Tacloban and other provinces in Leyte and then went to Mindanao to join the International Solidarity Mission in different regions in Mindanao.

Patrick Racela of League of Filipino Students in San Francisco said that during their mission in Surigao communities, they’ve found out how completely opposite were the claims of the government officials with regards to mining.

Racela told the media that they also had discussions with local government officials, the Mines and GeoSciences Bureau officer-in-charge, and mining company officials.

According to Racela, they were told that “[large scale] mining would contribute to the development of the country and beneficial to the people.”

He said that they had also talked with mining workers and various communities near the mining areas.

“Livelihoods were taken away from the farmers and fisher-folks due to the environmental damages caused by the mining company to the land and water sources,” Racela said

“There were harassment to community leaders and enforced evacuations because of military presence which was conjunctions with these mining operations,” he added.

Another group of delegates covered the communities in Northern Mindanao Region.

Yves Nibungco who’s one with the Bukidnon group said that there is a “huge contradiction” in the communities they have visited “considering that the region is the fruit basket of the Philippines”.

“We want to ask why this is happening and we would want the Philippine government to answer this question,” he added.

Nibungco pointed out that government programs that were supposed to help farmers have worsened their situation, instead. He cited the expanded agrarian reform program, CARP/ER, and described it has having “failed the peasants, it failed the community. It deprives the peasants to obtain lands in [Bukidnon].”

The group that went to see the Ata Manobo tribal group, Salugpungan, lauded the tribal community leaders for braving military threats and able to return to their respective villages.

“We salute the teachers, students, elders of the Salugpungan for their unity and victory in returning to their ancestral home land,” said Kuusela Hilo of International League for People’s Solidarity–US, whose group went to the Pantaron Range where the Salugpungan community is. The community leaders told us that what they want is to end the militarization in their community, and to give justice to the lost agricultural tools and farmlands during their evacuation,” she added.

When asked if they have plans on filing cases for the violations they have recorded in the communities they visited, Hino said that “We must be demanding justice in the streets, especially in the streets of US. So that the US government knows that it cannot get away with its crime against humanity here in the Philippines and anywhere else in the world.”

During their mission, Nibungco said that there were challenges that encounter them.

“The presence of military was there during our medical mission; about 7 platoons were deployed in the community. It hindered the community members to participate in our mission,” he added.

After the International Solidarity Mission, the groups announced their respective plans to the media.

For the youth groups, Nibungco said that they will campaign to hold the Philippine government accountable for the issues they have documented.

“It’s a common trend that we’ve seen in different communities in Mindanao that the government is not doing its job like providing social services and upholding peasants’ rights and protecting the environment,” he said.

Caintic of Anakbayan-Seattle said they “will educate more youth in the US with our experiences because its easy to fall victims of lies and that’s what we’re being told consistently.”

“Just how the media say about the affected areas of Typhoon Yolanda are now ‘completely rehabilitated’ but the reality is that they’re not,” she added.

They said that they will be holding different series of forum in the US and invite more youth to join solidarity missions in the Philippines.

“We will encourage more people to come to the Philippines and learn the truth,” Caintic added. Reposted by